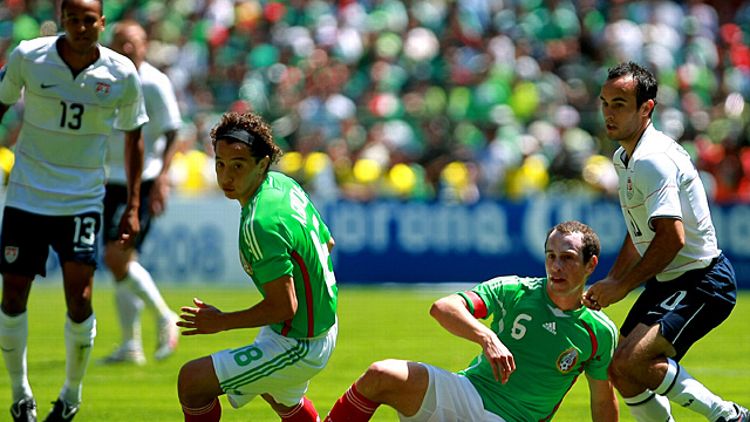 Today the USMNT take on Mexico in the famous Azteca Stadium in Mexico City to rekindle one of the great rivalries in sports. Back in 2009, Bill Simmons traveled down to Mexico to witness a World Cup qualifier between the two national sides. Here’s an excerpt from his column.

Thanks to Blanco and some shaky officiating (the Americans couldn’t get a call for two hours), the Mexicans seized control and eventually scored on a hellacious 25-yard bomb from Israel Castro. The crowd regained its swagger. Liquids started flying. We headed into halftime with everyone in my group thinking, I’d take a tie. Secretly, we knew how it would play out. Rattled by the crowd and the referees, the Americans played a tentative, sloppy second half that came back to haunt them at the 81-minute mark, when Donovan (battling the swine flu, although nobody knew it at the time) got badly beaten on a relatively simple streak down the field. His guy ended up creating the winning goal from Miguel Sabah. Game over.

That’s not what I will remember. I will remember the reaction afterward: complete and utter delirium. Everyone just threw whatever drink they had as far as they could. It was like watching a new Pixar movie called “A Snowstorm of Drinks” crossed with a full-fledged prison riot. Then and only then did we realize exactly how much that game meant to the Mexicans. As Hopper said right after the final whistle (Mexico 2, USA 1), “I guess the upside is that we’re going to live.”

Bang in the Chubby: The Fight to Name the 2014 World Cup Ball