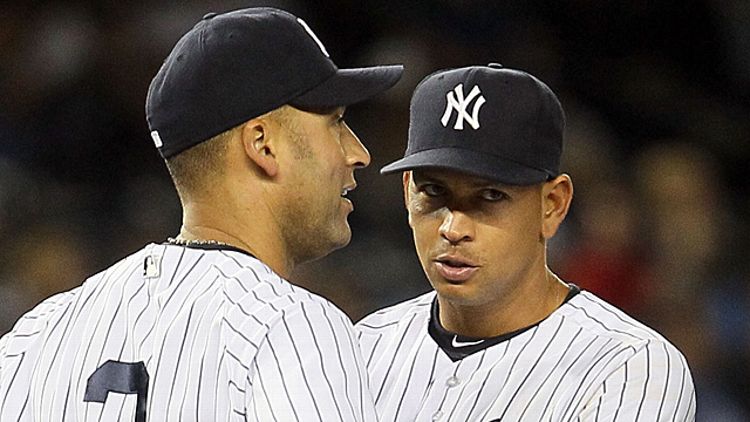 People will tell you that there’s no such thing as an “ugly win,” that a W’s a W, no matter how you get it. There’s some truth to this: The W is always the most important thing, the thing you want so much that you wake up in the middle of the night, sweating through the silk sheets Reggie Jackson recommended for your custom-made, interlocking-NY-logo-shaped, alkaline-waterbed, and immediately head to the rooftop batting cage to get in some extra swings, knowing that a few more cuts in the 3 a.m. Manhattan moonlight could be the difference between a seven- or an eight-game divisional lead in mid-August. If it feels like I constantly write about winning in this diary, it’s because winning consumes me, defines me, quiets the nagging voices in my head that whisper, “Derek, no one questions your effort, talent, or almost superhuman dedication to greatness. But let’s go win some more, champ.” Winning is oxygen, winning is life. Winning is the moment before you need more winning.

I feel like I’m losing the thread here, but that’s what happens when you succumb to the win-spiral. I’m back now and remember my point: Tonight was an “ugly win.” Grandy chipped in with four RBIs, and Eric Chavez, who’s been terrific off the bench and filling in for A-Rod, keeps coming up huge in big spots. CC gutted it out. But we committed two errors. We gave up eight runs. David Robertson turned in one very, very shaky inning. We got our W, but we have to W better. If you stop aiming for perfection, you’ll always be imperfect. I think I’m going to write that on some index cards to leave them on all the chairs in the clubhouse tomorrow, but only after I go up to the roof of the hotel and hit a few buckets of balls off my travel tee. I miss the DJ2 SkyCage, but when you’re on the road you have to make do, or the whispers will keep getting louder.

You’re always a little insulted when people attribute a win to your manager for getting tossed from a game. Do these reporters really think we’re so unprofessional that we weren’t giving maximum effort until Joe Girardi came running out of the dugout and chucked his hat on the field? Don’t get me wrong, players always appreciate it when their skipper’s willing to fight for them, but that has absolutely no effect on the outcome of a game. You win between the lines, not watching the game on a TV in the locker room, texting secret instructions to the bench coach while eating a Popsicle from the mini-fridge. And I probably shouldn’t be discussing this, as it might technically be a confidential club matter, but when Girardi gets tossed, it’s not a crime of passion. He’s got a whole Ejections section in The Binder, complete with comeback probability charts and diagrams outlining optimal dirt-kicking, cap-tossing, and spittle-flecking techniques. There’s even a page full of reminders of personal traumas so he can get his emotions to the proper heightened levels before he confronts an umpire. All that stuff has its place, for a manager. The Captain’s job is to lead his team to victory by the example of not losing his shit over a foul ball because a Trapper Keeper told him to.

Anyway, a pretty satisfying W, much better than yesterday’s. Off to Toronto for three.

Like I mentioned on Wednesday, Chavvy’s been tremendous for us with A-Rod out with his broken hand. It’s weird, because when Alex was healthy, he hardly noticed Chavez — they never talked in the clubhouse, in the dugout, on flights — but he seems to finally be taking an interest now that Chavez has been starting most of the games at third. You hate to eavesdrop, but you can’t help overhearing things when they’re both sitting in the row across from you on the plane and your Roc Nation headphones are accidentally unplugged.

Chavvy pretended to go to sleep, then so did Alex.

It’s an hour flight from Detroit to Toronto.

Not that I was eavesdropping.

It’s a long season, man. Players get hurt. In August, you see a lot of guys go down, but what’s happening in Toronto is ridiculous. Bautista, Rasmus, Lawrie, Arencibia, Lind, a handful of pitchers, all gone. Instead of bringing out the lineup card before tonight’s game, their manager just laid down on the bench and put a hot washcloth over his face.

Speaking of which, CC had to go on the DL again. Elbow pain. You just hope it’s the kind of elbow pain that magically clears up on its own after 15 days of rest, and not the kind that only goes away after Dr. James Andrews sews a zombie ligament into your arm.

I’m not going to talk about Phil Hughes. Trust me, it was bad. No cold-cut talk this time. “Don’t let their best guy beat you,” I told him last week, right before Miguel Cabrera beat him. So before the game I taped a photo of Edwin Encarnacion in Hughesy’s locker, and wrote THEIR BEST GUY on it in huge letters. The homer E5 hit in the fourth landed in northern Saskatchewan and is currently being delivered back to the Rogers Centre by an ice road trucker. Some guys aren’t visual learners, I guess. There’s only so much a Captain can do.

Oh, and please don’t send me letters complaining about any mistakes I may have just made about Canadian geography. This is my private diary, not an accurate Mercator projection of the Western Provinces.

Derek Lowe, just signed after getting cut by the Indians, showed up and shut down Texas for four innings of relief. Derek Lowe! It’s just very unsettling to see him in the pinstripes after all those years with Boston. You never quite trust a guy who spent that much of his career on the Red Sox; the entire time Johnny Damon was with us, he wasn’t allowed to wander the Stadium unsupervised because there was a credible fear he signed in New York only to assassinate Robbie Cano. You can call that paranoia, or you can call that due diligence: Robbie is alive and well today and Johnny still helped us win the Series in ’09. Lowe hasn’t played for the Sox since 2004, so you’re tempted to let your guard down, but there’s still the possibility Lucchino and his crew might be playing the long game. Joba’s got instructions to never be more than five steps away.

Tonight was Chavez’s first start in three games. After he singled in the bottom of the second, Alex slides over to me on the bench.

Then Alex gets up and walks to the other side of the dugout, closer to first base. Alex waves to Chavvy, but he doesn’t wave back. Then I notice Rodriguez’s number: 12.

Alex catches me staring at the back of his jersey.

When I get back to the dugout in the bottom of the third, he’s wearing his usual no. 13.

I spend the rest of the game sitting between Russell Martin and Swisher.

It’s one of baseball’s oldest superstitions: If you mention a no-hitter before the sixth inning, you’re gonna jinx it. Or is it the seventh? It’s very hard to remember the exact parameters of these things, so it’s best not to recognize a no-hitter at all until (a) it gets broken up, or (b) the game ends. Hiroki Kuroda hadn’t given up a hit after six innings. Did someone jinx him? Impossible to say. But I will put this out there: Lowe was lingering in Kuroda’s area of the dugout in the bottom of the sixth. He gave up his first hit in the seventh. You hate to accuse a guy of jinx-sabotage, but you have to earn the full trust of your new team, usually over the course of multiple seasons, before you’re beyond suspicion. Red is a color that takes a long time to fade. Showing up with a clean shave isn’t quite enough.

On the other hand, even the most loyal, brainwashed sleeper-cell agent would have a hard time returning to the Red Sox right now. The clubhouse is in open revolt. They’re calling team meetings to tell ownership they want a new manager. Dustin Pedroia is sneaking into Bobby Valentine’s office while he naps to reenact Abu Ghraib photos to text to his friends. You hear rumors Josh Beckett and Jon Lester secretly went vegan all year to protest the no-KFC policy, and it’s showing up in their performance. It’s sad to see your proud rivals go through something painful like this. But you can’t really know how sad to feel until you get a look at those Pedroia photos for yourself and determine if any tea-bagging is involved.

Maybe Derek Lowe can get his hands on them. That would go a long way toward earning his pinstripes.