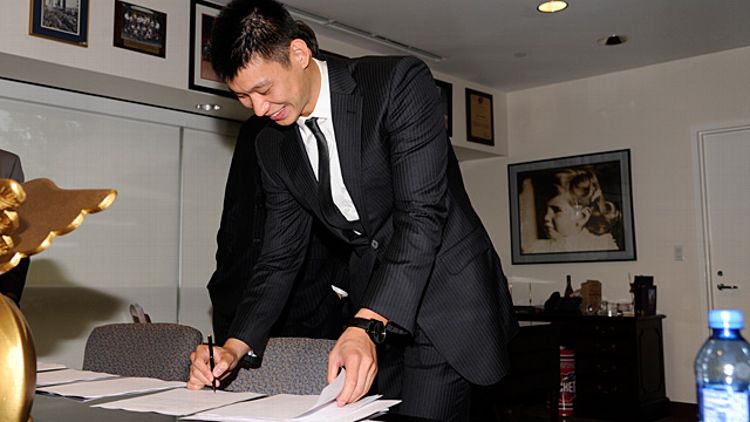 Yesterday we looked at Jeremy Lin and why his ability in the pick-and-roll could wind up warranting the contract that the Houston Rockets gave him. With regard to the Rockets’ half-court offense, Lin and his pick-and-roll play is a very good match. However, in basketball, you don’t play only offense, and that offense isn’t limited to pick-and-roll play. Once you start taking into consideration Lin’s ability in transition and how the Rockets want to play in the fast break, you start to worry a little bit. Start looking at Lin’s one-on-one defense, and you worry a lot.

On the offensive end, Lin’s weakest area last season was his decision-making in transition. According to Synergy Sports, Lin was one of the worst players in transition, posting a PPP of 0.857, placing him in the bottom 12 percent of all NBA players. Lin’s big problem in transition? Turnovers. Last season with the Knicks, Lin gave up the ball on 26.2 percent of his transition possessions.

In transition, Lin looks very uncomfortable with the basketball. Maybe it’s because he doesn’t like being forced to rush and make a quick decision. It should be noted that Lin is at his best in the half-court, where he is able to dominate the ball, survey the situation, and then make a decision when under control. On the break, Lin is too quick to get the ball out of his hands. These rushed passes tend to either miss their marks or go through congested passing lanes, leading to deflected balls and turnovers.

If Lin were joining last season’s Rockets, this wouldn’t be too big of a problem. The Rockets didn’t run too much last year. Of their 94.1 possessions per game (good for 19th in the NBA) last season, only 12.7 percent were transition plays (17th in the league). However, this season, the Rockets have built a roster around a lot of mobile power forwards and swingmen, so they should be looking to increase the pace of their offense. If summer league is any indication, they are going to be running a lot more. During their five games in Las Vegas, the Rockets ran on 20.4 percent of possessions, fifth highest among all summer league teams. With all this being said, the way Houston plans on running should make things a little easier on Lin.

The fact that Houston has a lot of forwards who can handle the basketball means that whoever grabs the rebound is probably going to initiate the break themselves, pushing the basketball instead of immediately looking for a guard. Guys like Terrence Jones, Jeremy Lamb, Royce White, and Marcus Morris can all create transition opportunities on their own, lessening the burden on Lin. In addition, the Rockets are looking to run an organized break more often than not. They have a secondary break that evolves into a half-court set. The point guard pushes the basketball along the sideline, and if nothing is there, he simply swings the basketball to the trailing big, which gets the ball to the top of the key and turns the trailing big into the decision maker.

This turns the fast break, a situation where things can get crazy, into a structured set with options. Having this option should allow Lin to thrive because it makes things simple for him. He’s going to push the basketball along the sideline, and if he gets a lane, he’s going to attack. If not, he’s going to quickly swing the basketball to a release valve. If Houston sticks to this, you will see Lin’s efficiency in transition rise. Frankly, Houston’s coaches and fans shouldn’t worry too much about his fast-break play. They should worry about his defense.

Defense is really hard to quantify, but one of the best ways to do so is to look at Synergy Sports’ isolation numbers. Using those metrics, Lin rates poorly. In isolation situations, he allowed a PPP of 0.971 (bottom 16 percent among NBA players) on 45.1 percent shooting last season. Defensively, Lin really struggles keeping his man in front of him, and that shows both on tape and in the numbers. According to Synergy Sports, he allowed his man to drive to the basket on 80.9 percent of the isolation possessions that he defended against.

This comes down to lateral quickness. Lin just can’t stay in front of NBA-quality point guards. Most of the time, he uses his smarts and his body position to stay in front of his man during initial dribble penetration, but it’s when his opponent changes direction that he has trouble.

For the Rockets to make this Jeremy Lin signing work, they are going to have to maximize the good and try to find ways to limit the bad. One way Houston can do this is by sticking to their secondary break offense and limiting Lin’s transition possessions. On defense? They are just going to have to try and provide as much help as possible.