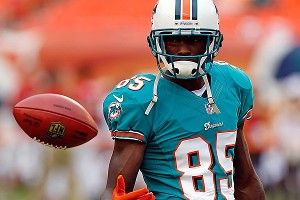 With all the big stories coming out of Dolphins camp in the past week, the second episode of Hard Knocks was bound to provide plenty of story lines. We parsed the four most memorable moments from Episode 2.

The conversation between Joe Philbin and Chad Johnson was obviously the most anticipated portion of the show, but when it actually came on, I’ll have to admit that it wasn’t easy to watch. In most instances of players being cut on camera, it’s based on an understanding that this is a business, and there’s nothing personal about it. With Johnson, it was only personal, and hearing both his apology and case that this was his first instance of real trouble (this is not totally true, by the way, as Johnson was convicted of domestic abuse in 2000), it was clear he was shaken by the whole thing.

But Philbin has a responsibility to his team to give it the best chance for stability going forward. And along with the serious nature of Johnson’s arrest, it had been clear through the first two episodes of the show that the straight-laced coach didn’t mesh with the outspoken wide receiver. In any case, actually getting to see that conversation play out was a rare if uncomfortable opportunity.

The way HBO contrasted the stories of undrafted free agent receiver Chris Hogan and three-year veteran Roberto Wallace was pretty much a perfect example of why wide receiver is one of the more fascinating positions in sports.

It’s not that WR is necessarily a more nuanced position than others, but its nuances are less apparent. At one point in last night’s episode, in a conversation that apparently took place in June, Dolphins assistant GM Brian Gaine approaches Wallace and asks him what’s stopping him from being a starter in the league. He’s big. He’s fast. There aren’t many people walking around on planet Earth who look like him. Yet the 6-foot-4, 225-pound Wallace just never seems to be able to get any separation from defenders.

Chris Hogan isn’t 6-foot-4, but he is open, all the time. The former Penn State lacrosse player is open often enough that Reggie Bush has taken to calling him “7/11.” It would be silly to make any judgment based on a few random practice plays shown on TV, but watching Hogan gear up, gear down, and move in and out of his breaks was impressive.

In my time around football, I’ve always found offensive line coaches to be my favorite guys, and Jim Turner only solidified that last night. Any time a chalk talk involves the Dolphins cheerleaders, “Call Me Maybe,” crudely drawn smiley faces, and erection jokes, I’m in.

Speaking of erection jokes … The best part of the episode may have been Joe Philbin trying to pretend that the penis-shaped buzz cut on rookie guard Josh Samuda wasn’t hilarious. CHAMPIONS LEARN HERE.

There was a cruel bit of irony in how the second episode played out for quarterback David Garrard. When Ryan Tannehill dove for a first down during practice, Garrard met the rookie as he came off the sideline. “I love the fire and the grit and the moxie,” Garrard said, “but please don’t dive like that in practice.” About a half hour later, a Dolphins trainer was informing Philbin that Garrard had injured his knee while watching his kids.

The various reactions were fascinating to see on film, including GM Jeff Ireland slamming his phone to his desk when learning about how long Garrard would spend on the shelf. But the truly painful moment came in Garrard’s assessment of the situation: “Didn’t bang it on anything. Didn’t fall on it. Maybe it’s just father time.”