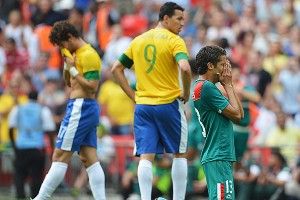 The long podless summer of your discontent has officially come to an end. Yes, the Blazers are back — freshly cleaned and pressed just in time for the start of the 2012-13 English Premier League season. But where to begin in this introductory Men in Blazers podcast? There’s really no other choice than to quickly consider the 2012 Olympic Games, hosted by motherland Great Britain. To the great surprise of the Blazered Men, there’s still life in the Old Dog yet.

But back to the football. In this week’s pod, the Men in Blazers delve into a thorough and mostly fabricated preview of the coming campaign, going team-by-team before looking deep into their crystal ball to offer bold predictions. Spoiler alert: It’s going to be a weird one.