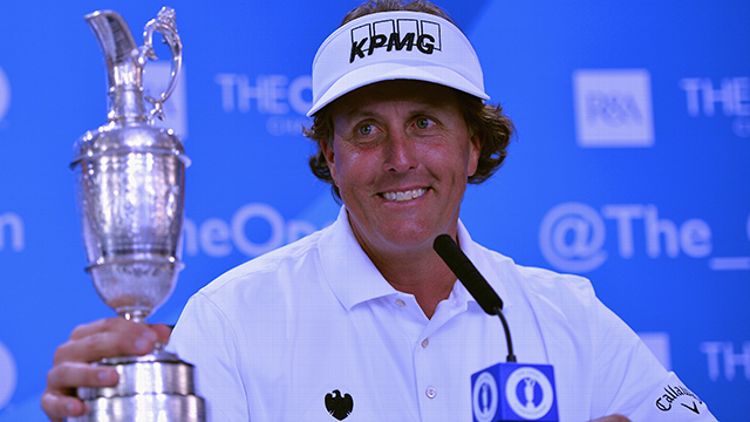 For reasons that are hard to pin down, the golfing establishment — that stoic, humorless group of talking heads, beat writers, retired pros, and country club big shots — seems obsessed with projecting an image of nobility and tradition. Maybe it’s the sport’s slow pace, or the way players assume a burden of honor by keeping their own scores, or that golf costs a lot of money and attracts an audience well-schooled in venerating itself. Whatever the cause, it can be smothering. I’ve seen it keep plenty of young people away from the game, and it’s a shame, because the old guard has got it backward. Golf is not stately and ponderous; it’s elusive, and it’s mischievous, like a fickle Olympian god trying to screw you over with an impossible riddle.

Golf, defined by two results from the past month:

1. At the U.S. Open, on an impossible course, an American star steals the spotlight. He has finished second at the tournament an unbelievable five times (a record), but this feels like the year when he finally breaks through. He attracts attention immediately by flying in just hours before his round because he attended his daughter’s middle school graduation a day earlier, preparation be damned. Sunday will be Father’s Day — how symbolic. He ends up holding the 54-hole lead. The swelling crowd is behind him to a fanatical degree. And then, late in the final round, he fades. An English golfer steals the win. The American finishes second. Again.

2. At the British Open one month later, on an impossible course, a British star steals the spotlight. He has finished in the top three at majors an unbelievable seven times (a record for non-winners), but this feels like the year when he finally breaks through. At age 40, entering the late stages of his career, he doesn’t know how many more chances he’ll have, but he’s playing in his native country in front of a sympathetic gallery. He ends up holding the 54-hole lead. The swelling crowd is behind him to a fanatical degree. And then, late in the final round, he fades. The American star roars from behind and steals the win. The Briton finishes in the top three. Again.

It would be one thing if we could say that the results looked random, and that the idea of anyone winning a major as a sort of lifetime achievement prize was too idealistic in the first place. But the problem is that it doesn’t feel random. It didn’t feel random when Greg Norman got his last shot at the Masters in 1996 before another painful collapse. It didn’t feel random when Tom Watson found himself on the precipice of unlikely victory at age 59 in the 2009 British Open. And it didn’t feel random at Merion, when Phil Mickelson lost to Justin Rose, or yesterday, when he beat Lee Westwood. As always, it felt calculated. It felt subversive.

There are so many losers in professional golf, just by virtue of the format, that major tournaments are packed with potential redemption stories. They lurk in the field, fighting for air and waiting for the big moment. But even by those standards, Sunday’s leaderboard at Muirfield was especially rife.

Westwood was fighting to rid himself of the “best golfer never to win a major” stigma, and trying very hard not to become his generation’s Colin Montgomerie. Tiger Woods is the best golfer in the world by almost any measure, but he has been deficient on the weekend at majors since the 2009 scandal, leading to an unthinkable drought. Adam Scott was on the verge of winning the British last year, when a near–Van de Veldian collapse handed the tournament to Ernie Els. Zach Johnson was out to prove he’s no one-hit wonder. Ian Poulter wanted to show he has more than just Ryder Cup excellence to offer. Even Henrik Stenson was probably on the lookout for a new calling card after stripping down to his underwear at a PGA event four years ago and terrifying the entire state of Florida. (OK, that one’s a stretch, but seriously, I advise you not to look at the pictures.)

And then there was Mickelson, who was trying to rebound from what had to be the most heartbreaking loss of his career at last month’s U.S. Open. If devastation is having something within your grasp and watching it vanish over and over, then Mickelson qualifies. But there’s nobody in golf who can bounce back from devastation quite the same way. His perpetual expression — wild-eyed, like a gambler on a high — gives him away as an endlessly optimistic American striver. He’s like your friend’s crazy dad, the manic one who launched a new ridiculous and doomed business venture every six months; who never seemed to dwell on repeated failure for too long, and who was the secret laughingstock of the neighborhood until he finally got it right and made millions.

Mickelson was never going to slow down. Instead, he played (and won) the Scottish Open to prepare for the rigors of links golf while the rest of the Americans were taking a week off. A week later, he kept the same old daredevil stare plastered on his face while he skirted bunkers and sank putts on a Sunday charge of epic proportions. Afterward, he called it “the best round of his life,” and, if anything, that might be an understatement. His 66 was the best score of the day, seven below the field average of 73, and enabled him to come from five shots behind to win by three strokes and suck the drama out of the finish even as his rivals floundered away on the back nine.

The cult of Mickelson worship in America can get really old really fast. We’ve canonized him, and he’s clever enough to play into it with an aw-shucks persona that doesn’t stand up to close inspection. It’s frustrating, to the point that there was a significant reactionary element rooting against him among U.S. Open media. Golf’s impulse to lionize its stars has targeted Mickelson for sainthood ever since Tiger became a morally dubious commodity, and the results are cloying. But beneath all that whitewashing, it was satisfying to see Mickelson’s energy unabated by the loss at Merion. Because if anything could have laid him low … but it didn’t. The light that mattered shone on.

And if you’re a golf fan, you might as well get used to the emerging story line right away: Next summer, Phil will be traveling to Pinehurst, North Carolina, for the U.S. Open — which he has now finished in second place six times — with the chance to complete the career slam.

There’s only so much redemption to go around in golf, and the winner takes all. Scott and Johnson will be fine; they have their green jackets for comfort. Poulter will probably never win a major — the man needs an enemy more specific than the course to thrive — but he hasn’t been close often enough to assume tragic proportions. Stenson is 37, but you get the feeling he’ll have more shots and snag one someday. Westwood is in trouble; a history of crumbling under pressure continued at Muirfield, and for all his positivity and preparation, his final-round 75 betrayed him as a player destined to fail on major Sundays.

And what about Tiger? If you’re a student of the numbers, you could have predicted what happened on Sunday. Tiger has led after 54 holes in a major 15 times, and he’s gone on to win 14 of those tournaments. But when trailing, he’s never made that iconic Sunday surge to put him over the top. Maybe it’s not in his nature. He’s such an obvious control freak, swearing and grimacing his way through rounds, that maybe he needs to control his own destiny. Maybe the thing that makes him so automatic with the lead unsettles him from a weaker position. He’ll always be the greatest golfer of our generation, but the absence of even one comeback makes for an odd gap in his résumé. For all his triumphs, he’s never managed what Mickelson carried off yesterday. There’s no give when he’s winning, and no fight when he’s losing.

But as with most legends, we tend to exaggerate the narratives when Tiger’s involved. Since his humiliation in 2009, he’s finished in the top six at majors in six of 13 events. He owns the no. 1 world ranking and the top spot on the PGA money list. He wins more events than anyone else. He will win another major before long. He will probably still break Jack Nicklaus’s record.

What has changed, though, is how we feel about him. Fair or not, most golf fans didn’t bail on Tiger just because of a fight with his wife and the revelation of a nasty adultery habit. Second chances abound in sports, within reason. No, what’s killed us is the way he’s behaved since. He plays bitter, joyless golf, where the predominant emotion is anger and the whole spectacle looks like a private battle he’ll never win. The outlook is cynical, fate is his enemy on every putt, and each smile is sarcastic. He’s become Sergio Garcia, minus the overt whining. Maybe winning a major will set him right, but until then he’s gradually losing whatever it was that made him so magnetic and intimidating.

Jim Mackay, who everybody calls “Bones” because of the time Fred Couples forgot his name 20 years ago, has been Mickelson’s caddie since 1992. When Mickelson sank his birdie putt on the 18th hole, Bones started crying. He pulled his hat low to disguise the emotion, but he couldn’t hide from the cameras. There were still eight players on the course, and his celebratory tears spoke to the dimensions of Phil’s round. The 66 came on a day when no other contender besides Poulter could break 70. Considering the rough conditions, it might be the greatest final round in major history. If not, it’s definitely in the conversation. Afterward, Tom Rinaldi reminded Mickelson that he now owned three of the four majors.

Only five players have won all four in the modern era — Woods, Nicklaus, Hogan, Player, Sarazen. Mickelson’s already one of the all-time greats, but he knows he’s just a small step away from becoming legendary. Pinehurst represents his chance at a storybook conclusion. He’ll be bolstered by a game in glistening shape and a gallery that would carry him on a palanquin if they could. It’s the perfect story.

But golf hears that word — “perfect” — and smiles.