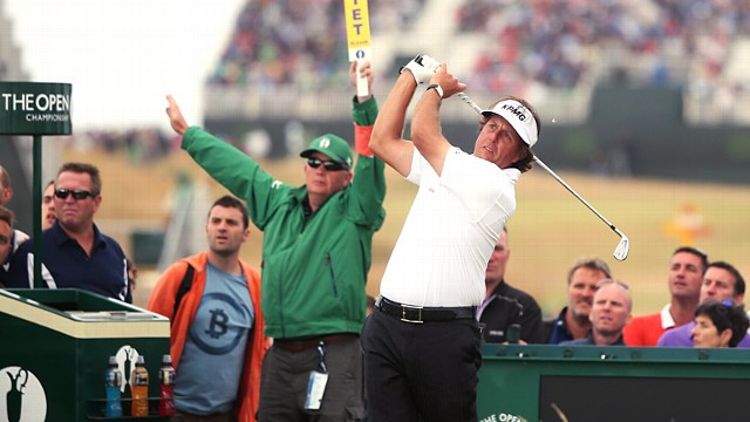 It never seemed to make sense, why Phil Mickelson would travel to the United Kingdom each summer to lose two tournaments on courses he didn’t especially like and admittedly didn’t know how to play. Perhaps it was to see the sights of the realm? He’s probably seen them by now. So … golf? Why?

In the past, American golfers who didn’t jibe with links-style play would just stay stateside for the week. Rather than spend the annual, workmanlike fortnight barely or not even making cuts on the old sod, Mickelson would’ve been better off at home, practicing for the PGA Tour’s loaded August schedule and enjoying his beloved Five Guys hamburgers. Seeing Phil Mickelson hoisting the Claret Jug would be like seeing Michael Jordan winning the pennant.

Then Mickelson turned 43, suffered one of the most piercing losses of his well-pierced career, and popped over to Scotland — to win the Scottish and British Opens in consecutive weeks, the latter by a comfortable margin. They are his only two wins in the U.K., and what’s most unusual is that he rarely looked out of his comfort zone. It makes you wonder why the owner of the best short game of his generation could never figure out links-style courses before.

There’s a simple lesson behind Mickelson’s great play of late: Getting rid of the driver isn’t a bad idea! Especially on dry, fast courses where the balls rolls, and rolls, and rolls.

The driver is a dumb club and no one should ever play it. Unless you’re good at it. Mickelson is not good at hitting his driver, at least with anything resembling consistency. Sometimes he can hit the “baby carve slice,” but when he really needs to, he’ll more often than not hit the Death Slice.

The revelation he and Tiger Woods have had this year is that they can hit the 3-wood very far — like 300 yards — and much straighter. The light bulb has gone off. If they can hit it that far while keeping it straight, why use the driver at all? And now Tiger and Phil are the no. 1 and (possibly/effectively) no. 2 players in the world all over again, just like they were back during the Bush administration.

Mickelson has had self-proclaimed revelations before. They’d typically work for a week or zero before being lost to history. Remember the belly putter period a few years ago? Or any of the other putters? He’d announce something seemingly every month at one of those Tuesday practice-round press conferences, looking as though he’d just seen the visage of Jesus Christ on the face of his lob wedge: I tweaked my grip/moved the ball a touch to my back foot/put an old-timey jigger in the bag/ate four bananas — not five, not three, but four — between the seventh and eighth holes, and it’s been a breakthrough in my career! These sort of it all makes sense now moments would typically make you want to roll your eyes as he’d have them, and then he’d suffer consecutive weeks of T-40 finishes.

But ever since the “Phrankenwood” revelation — basically a 2-wood — Mickelson really has played consistently well in a way he hasn’t in years. He’s had runner-up finishes in Memphis and at Merion (where he didn’t choke, by the way; he played quite well and just came up short), and now the two international wins. He missed the cut at Greenbrier, but he always misses the cut at Greenbrier. Perhaps next year will be the year he figures out that pretty easy course. For this year, figuring out “Scotland” is enough, but more important is figuring out that he should never, ever hit his driver again.

It’s such a foundational course-management fix that, if he can remember it, he might just be able to keep this late-career rejuvenation jig going for a while. The same goes to anyone out there for whom length is not the issue. The people who make golf clubs make some phenomenal 3-woods these days! The whole business about enormous 460cc driver heads is so 2000s, people. The next time you hear a lame golfing buddy say “check out the size of this new driver — I’ma hit it so far!,” say to that person, “Oh, are the Strokes your favorite band, too?”

Boxing Round of the Year: John Molina vs. Mickey Bey