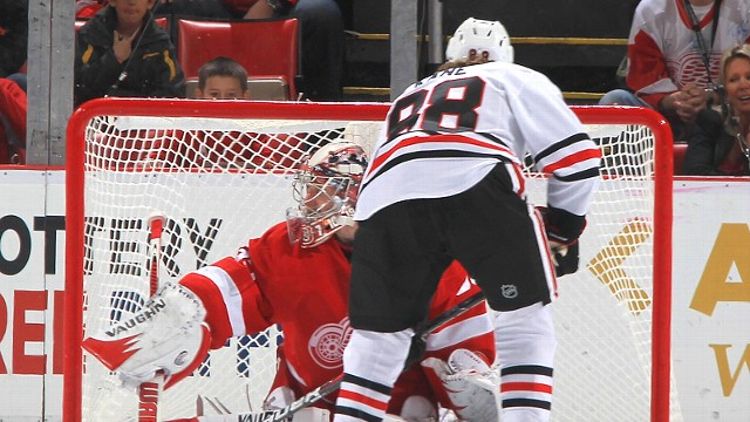 Yesterday afternoon, it was harder to imagine a more ideal place than on a comfortable couch with a TV remote in hand. The sports slate was excellent from start to finish, but the best moment probably came late in the day’s first set of cross-sport airings. LeBron James was leading a LeBron James comeback in New York while the Detroit Red Wings were attempting to end the Blackhawks’ 21-game point streak to start this year’s NHL season.

James’s second half in Madison Square Garden was full of familiar if still awe-inspiring images. Sequences of blocks and offensive rebounds were reminders of how complete his dominance can be, but the clip everyone was watching last night and this morning is that final dunk — a game-sealing explosion with that right-hand-cocked-behind-the-head that probably deserves a trademark. It was the end of a show from the game’s biggest star on sports’ most famous stage.

The NBA is traded in easily communicable moments. The dunks from James, and later in the night from Kobe Bryant, were fodder for SportsCenter, trending topics on Twitter, and material for “did you see that!?” conversations between friends and coworkers. It’s a game of moments, even if those moments don’t happen during the actual games. I don’t know how much time I spent last week talking about what James was doing before tipoff, but I can tell you that it was a lot.

It’s that phenomenon, I think, that shaped my reaction to how things ended yesterday in Detroit. Some of my earliest sports memories are from the upper deck of Chicago Stadium (I’ve long maintained that my father should’ve been arrested for bringing a 5-year-old there), but the strong affection I once had for hockey began petering out during the first lockout. Aside from the 2010 playoffs, the Blackhawks haven’t been a consistent part of my sports life in some time. It took a trip back to Chicago this weekend for me to make a point to sit down and watch a team on an undeniably impressive run.

I spent most of the game flipping back and forth between the Blackhawks game and the Heat, but when the Hawks got on the power play with a little more than two minutes left, the TV was tuned to NBC. Patrick Kane’s top-shelf finish was enough to incite a reaction, but the real highlight came during the shootout. After Corey Crawford sent the first two Red Wings shots aside, Kane stepped to center ice with a chance to win it for the Blackhawks.

Rather than trying to describe what happened (and fail), here’s the video:

After the puck hit the back of the net, and after I’d stopped laughing, my first thought was one that I’m sort of embarrassed about: “I need a GIF of that.” These days, that’s usually it. When LeBron takes off from the hash mark or Kobe stuffs it on Josh Smith, there’s a feeling that people want to see that, and they want to see just that, and they want to see it over and over. Part of that desire as it relates to basketball is frustrating. Blake Griffin fills the highlight reel every week, but in terms of playing great basketball, he still leaves things to be desired. That being said, most people don’t care.

I know that Kane has had his issues (I mean in terms of playing center and playing defense; the off-the-ice ones are less relevant here), but as someone who can no longer have a conversation about hockey that goes beyond “That was really cool,” I can say that I don’t really care. I understand that hockey has plenty of great players these days. I know that Pavel Datsyuk regularly wows, and I know that Steven Stamkos does nothing but score a goal or two — constantly.

I’m not trying to say that what Kane did yesterday is new or unheard of; I am saying that for a sport whose popularity has waned, there is something to having a highlight-creating star in one of the NHL’s most important cities. In the way that LeBron’s dunk probably made someone who’s never heard of true shooting percentage want to watch more basketball, Kane’s goal made me want to watch more hockey. As we start to talk about sports in a way that requires evidence for everything, it’s easy to forget that sometimes, shit is just cool. Oh, and here’s that GIF: