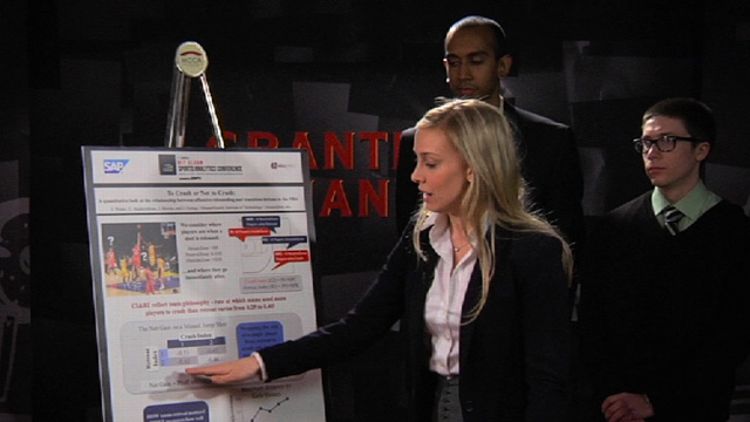 This past week Grantland visited the annual MIT Sloan Sports Analytics Conference, and boy are our brains tired. After two days of presentations and panel discussions, we’ve got a lot to share. So, without further ado, here are a bunch of podcasts and videos we recorded during our time in Boston.

First, you’re going to want to check out our two-part podcast. In Part 1, Zach Lowe speaks with Rockets GM Daryl Morey, Brian Kopp of the SportVU system, and Benjamin Alamar, who discusses why the Thunder drafted Russell Westbrook over Brook Lopez. In Part 2, Jonah Keri talks to Dodgers president Stan Kasten about running a $2.15 billion team, and to ESPN’s Buster Olney about PEDs in baseball.

Now, on to the videos.

How the Rockets Traded for Thomas Robinson

Daryl Morey, Houston Rockets GM, reveals how the Thomas Robinson trade happened, and talks about that one awkward conversation in which Chandler Parsons asked for a pay raise.

Using opponent field goal percentage, Kirk Goldsberry details how Larry Sanders is the best interior defender in the NBA and David Lee is one of the worst.

Acceleration Is the Most Important Skill in the NBA

Philip Maymin presents his findings about acceleration in the NBA after analyzing tons of data using SportVU cameras.

The Thunder Almost Drafted Brook Lopez Instead of Russell Westbrook

Ben Alamar, former analytics consultant for the Thunder, describes how the Thunder nearly took Brook Lopez over Russell Westbrook, and how analytics pushed them toward Westbrook.

How SportVU Cameras Are Changing the NBA

Brian Kopp, vice-president of STATS, talks to Grantland about the data-tracking cameras that were the star of the MIT Sloan Sports Analytics Conference.

PEDs, Hall of Fame, and the Genius of Joey Votto

Jonah Keri talks to ESPN’s Buster Olney about PEDs, the Hall of Fame, the East divisions, and the genius of Joey Votto.

MIT students describe how their research shows that more NBA players should crash the boards rather than get back on defense.

After analyzing over 12,000 NFL field goals, Aaron and Torin find that pressure situations and timeouts before the kick do not affect the outcome. In short, don’t ice the kicker.

A new app that freezes play on the basketball court and tests the user’s ability to determine the outcome of the play.

Give Me the Ball: Drawing Inspiration From Nike's Latest Ad