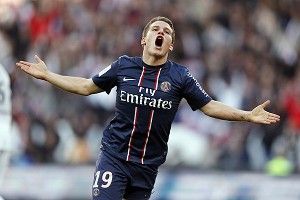 Three games into the Ligue 1 season, things looked bleak for Paris Saint-Germain. The team was winless and sitting in 13th place in the table. It all seemed a long way from the preseason hype and the expectation that the team backed by Qatari billions would dominate this season. If anything, they looked likely to confirm their reputation as perennial underachievers who often flatter to deceive. Everything changed 27 seconds into their match against Lille, when Zlatan Ibrahimovic gave the team its first lead of the season. PSG defeated Lille, 2-1, and has yet to trail since. After Saturday night’s 2-0 win against Sochaux, the team has now scored 12 goals and conceded one in its last five matches. They will enter Sunday night’s showdown against Marseille on a five-match winning streak with an opportunity to go top of the table after Marseille was trounced 4-1 by Valenciennes, shrinking its lead over PSG to three points.

As PSG finds its form and its star players are now fully settled into the team, there is a real threat that they will indeed become an elephant towering over 19 mice. The team has the strength in depth to keep players fresh, and Carlo Ancelotti now looks like a man fully in control.

Saturday evening against Sochaux, Ancelotti made wholesale changes to the side that defeated Bastia 4-0 last weekend. After getting so many things wrong at the beginning of the season, Ancelotti now seems to have a deck full of aces and nothing but rabbits in his hat. The latest masterstroke was his decision to give Kevin Gameiro his first start of the season. Gameiro, who had been a peripheral figure all season, scored the two goals that gave PSG another comfortable league win. The goals were all too easy, and Gameiro might have had a hat trick had he converted his acrobatic overhead kick in the second half. PSG dominated the match for large stretches, and for the first time this season I saw large groups of fans leaving Parc des Princes before the final whistle, as Sochaux offered nothing beyond the assurance that the match would be played with 22 players. In a post-match interview, PSG’s defender Alex said it was the easiest match of the season.

Reading the pre-match quotes from PSG’s last two opponents, you get the feeling teams now spend more time admiring them than trying to beat them. Before Saturday’s match, Sochaux goalkeeper Simon Pouplin said his side’s aim was to not concede five goals. The week before, Bastia’s manager feared PSG would score between three and 10 goals against them, and Bastia’s midfielder Yannick Cahuzac said PSG was “starting to look like a war machine, an impressive armada.”

With opponents now seemingly accepting defeat before a ball is kicked, the biggest threat now appears to be complacency. If they are playing easy matches consistently like they have the last two weeks, will PSG be ready for the challenge in the Champions League, or will the ability to rest players for Ligue 1 fixtures make them fresher for the knockout phases in the spring? At the beginning of the season, when the players weren’t familiar with each other and lacked fitness, opposing clubs stood up to PSG, frustrated them, and held them to two goals in three matches. The mood in Paris was that the team was a tease and that Carlo Ancelotti wasn’t the right man for the job. We were all wrong then, but we may be equally wrong now in believing that after their winning a couple of matches we should hand them the Ligue 1 trophy. There’s still the small matter of a trip to Marseille next weekend, and if at any point Ibrahimovic has to sit out long stretches of the season, the team will find it difficult to replace his goals. What is unquestionably true today, though, is that the gap in class between PSG and its opponents is extremely wide.

Few conclusions can be drawn from watching PSG win by virtual walkovers against Bastia and Sochaux in the last two weeks. The true test begins Wednesday, and by this time next week we will know if we have a real war machine on our hands or if PSG is just another flat track bully. The team travels to Porto for the midweek Champions League fixture before Sunday night’s encounter with Marseille away from home. The two matches will be my first road trips of the season, as I managed to get on both of the team-sponsored flights to Porto and Marseille. Win both matches and PSG will be sitting atop its Champions League group and its domestic league. Ibrahimovic has already started the war of words with Marseille, and things will only get more feisty between the two rivals in the days leading up to the match. In an interview with Telefoot, the PSG forward was asked if he knew Marseille defender Nicolas N’koulou. In typical Ibrahimovic fashion, he responded saying, “N’koulou, who is that? I’ve never heard anyone speak of him. It’s not a lack of respect, but when I don’t know a player I don’t know him.” It should come as a surprise to no one that Ibrahimovic claims not to know N’koulou. When he was introduced to the Paris media, one of the first questions was whether he knew any players in Ligue 1. “No. But for sure they know who I am,” was his answer.