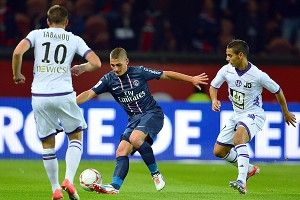 The last time we checked in with Paris Saint-Germain they drew their third consecutive match of the season and were sitting 13th in the Ligue 1 table. Showing just how fickle I was, I went home after the 0-0 draw with Bordeaux and canceled my trip to Lille. That was a mistake. Against Lille, PSG got their first win of the season as Zlatan Ibrahimovic opened the scoring after just 27 seconds to quiet the home crowd, and settled the match with his second goal after collecting Javier Pastore’s through ball. Friday night PSG returned to action and recorded its second consecutive win of the season behind goals from Ibrahimovic and Pastore. With the exception of the excellent Marco Verratti (more on him later), it was a workmanlike, no-nonsense performance. But if the victory was unimpressive, it was also never in doubt, as Toulouse rarely threatened and PSG controlled the tempo from start to finish.

The win moved PSG to fourth in the table, and they are now six points behind league leaders Marseille, who continued their perfect start to the season with a 1-0 win over Nancy.

Carlo Ancelotti, for the first time this season, played the same lineup in consecutive matches and the performance had a hint of coherence that we didn’t see earlier this season. Finally, the grease is starting to touch the wheels and Ancelotti is accomplishing more by doing less. For now, he has shelved the idea of using Javier Pastore as a deep-lying playmaker and instead has given him a free role just behind Ibrahimovic. Blaise Matuidi remains a starter in spite of himself and Ancelotti seems to want him high up the field, which is understandable only if his thinking is that Matuidi is less of a liability to the team the farther away he is from his own goal.

The defense kept its third clean sheet of the season, but there will be changes at the back as club record signing Thiago Silva’s introduction to the side is imminent and the addition of Dutch right back Gregory van der Wiel will give Christophe Jallet some competition for the starting spot on the right of the defense. No matter what changes Ancelotti may introduce, the sure thing for PSG is Ibrahimovic’s consistency. Against Toulouse he scored his fifth goal in four matches, an easy tap-in after some good work from Jeremy Menez. Ibrahimovic still looks like he’s regaining his fitness and is not yet at his best, but he continues to deliver goals when he’s in the starting lineup. Javier Pastore’s first goal of the season, a delicate lob over the onrushing keeper, reminded everyone of his quality.

But the story from Friday night wasn’t the consecutive victories or the two goals. After the match all the talk was about PSG’s teenage midfielder Marco Verratti. Just five matches into the season, Verratti has already established himself as PSG’s best midfielder. While I’ve settled on calling Verratti “the Shadow” for his elusiveness, the Paris media has called him everything from le petit prince du Parc to le parrain du milieu, the godfather of the midfield.

What separates Verratti from his more experienced teammates is uncertainty — the uncertainty of just how good he is. At 19, he’s not yet sure what he can or cannot do. He hasn’t yet found the limits of his talents, so he tries everything. Each time he touches the ball the game ceases to be 11 vs. 11 and becomes a one-man show. No matter how frenetic the pace of the match, once Verratti is on the ball everything slows down as he takes his time to invent something. Whether it’s a 30-yard lobbed pass like for the Pastore goal or a pirouette to leave a defender stranded, Verratti does it all while making it look as effortless and tidy as a five-yard sideways pass. The highlight of Friday night came when Verratti picked up the ball in his own box early in the second half. The easy and advisable thing to do would have been to either hoof the ball clear upfield or put it out of touch so the defense could regroup. Instead, Verratti looked up and decided to take on the defender. First he went around him, then fell to the ground, still controlling the ball, regained his feet, beat another defender, then started a passing sequence that brought the crowd to its feet for the loudest cheers of the night. The crowd might have loved it, but the opinion of the only man who matters was different.

“He is very confident and comfortable on the ball, but he needs to take fewer risks when he is in front of the defense,” Ancelotti said. Ancelotti is an old man who has seen it all, and he knows that one day Verratti will get caught in possession too close to his own goal and PSG will pay dearly for it. Verratti also has a reckless side when he doesn’t have the ball that was evident in the 33rd minute against Toulouse, when he lunged in with an ill-intentioned two-footed tackle that earned him a yellow card. The tackle came just seconds after PSG were denied a free kick after what appeared an obvious foul, and it was silly for Verratti to take matters into his own hands, but those are some of the growing pains that Ancelotti will have to deal with this season as Verratti sorts out the boundaries of his own abilities.

Watching Verratti, and then hearing Ancelotti voice his fears about Verratti’s cavalier style of play the day after the match, reminded me of the classic French film The 400 Blows, a kind of French cinematic equivalent of The Catcher in the Rye. The film and the novel are both about misunderstood youth, and Les quatre cents coups (The 400 Blows) chronicles the mischief of 12-year-old Antoine Doinel: smoking cigarettes, drinking liquor, stealing, acting up in class, landing himself in a jail cell with prostitutes, and ultimately sent to reform school by his parents. Much like Holden Caulfield before him, Antoine proves that, for better or worse, boys will be boys. On Friday night, Marco Verratti reaffirmed that. While he might have given old man Ancelotti a heart attack with some of the things he did, Ancelotti must accept that the occasional recklessness and precociousness is the price he pays for the defense-splitting passes that Verratti brings to the team.