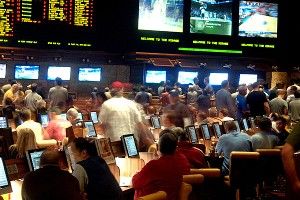 When I told my friend Richard Feynman (all names of real people in my I-suck-at-football coverage have been replaced with those of noteworthy physicists) (I already forget why I decided to do this), whose fault this column is, that I was going to be in Vegas over the weekend, he said, “You’ve gotta watch a game at a sportsbook and write about it.”

So, OK: I’m at a kind of gambling-workstation with a temperamental touchscreen in front of me; a wall of LED screens showing an afternoon’s worth of NFL football (and some horse racing, and a little golf) looms above me in the middle distance. I’m sitting just a few steps from the Hard Rock Hotel’s casino floor, but I can barely hear the Pavlovian bleeping of the slot machines or the never-ending high-energy-hits-of-the-’70s-’80s-’90s-and-today playlist that blares in all the Hard Rock’s common areas at all times; I’ve turned my back on packaged rock-and-roll fun to do some serious football watching with serious men. There’s a bar, and occasionally a pregnant waitress in a T-shirt promoting Guns N’ Roses’ imminent Hard Rock residency makes drink-related inquiries down the row — it’s Vegas and it’s well past noon — but barring the occasional neglected half-full Bud Light bottle, everybody here seems to be on a strict utilitarian-fluids regimen: coffee, water, Monster Energy.

Another way the rules are different here: I’m guessing you can’t clock a public catnap in any other part of the casino, but apparently bus-station rules apply here in the sportsbook, because there’s a guy on the end of one row lolled all the way back in his chair, eyes closed, chest gently rising and falling, mouth open, like an incompetent security guard in a movie about mannequins that come to life, and nobody’s nudged him.

I’ve been here since Friday, for non-gambling reasons, but a few minutes ago I approached the counter, gave the counter guy my best “I say, how might I place a wager on today’s professional-football contests, kind sir,” act, which is only kind of an act since I honestly didn’t know how to do it — and threw down $20 on the Cincinnati Bengals, the team I’ve thrown my lot in with for no good reason.

“Well, they’re a slight underdog,” the counter guy said, politely, because his job is to take my action no matter what, no matter how dumb I’m determined to be. I could walk up to him and ask what the odds are of Omar Sharif winning the Ryder Cup today and he’d probably say, “Well, Dr. Zhivago is a slight underdog.”

So now I’m at my station, watching the pregnant waitress negotiate the two steps down from the raised bar area, a tray of beverages level on one arm. She touches the side of her belly, as if she’s felt a kick; maybe there’s a horse the kid likes in the fourth race at Santa Anita.

Another thing about this place: You can kind of move in, furnish your space, make it your own. The guy on my right — sweaty hair curling from under a baseball cap — has covered every available square inch of surface area in front of him with the accoutrements of the gambler’s trade. Dog-eared copies of Doc’s Sports Journal and Marc Lawrence’s Playbook, big grab bag of Harvest Cheddar flavor Sun Chips, empty peach seltzer bottle, local paper, flattened fruit-snack packages, cell phone, portable radio. Homey touches. He’s a plant and a couple of family photos away from working here full-time.

But it’s the man on my left I’m fascinated with. He looks like Dick Cavett, if Dick Cavett had spent a quarter century making grim choices. Like the husk of Dick Cavett. Like a Puritan minister who’s lost his congregation to plague and Indian attacks. Like Keir Dullea at the end of 2001, except the Monolith is the Falcons-Panthers game. He’s got nothing on the desktop in front of him except a stack of betting sheets for baseball and football and a largeish soft-sided cooler, the kind you use to tote a 12-pack of beer to the beach. He’s dressed like a middle school science teacher, in a white shirt and khaki pants; he’s wearing orange foam earplugs and his nose hair is visible in profile. He looks not so much old as desiccated. Presumably the spidery notes in the margins of the odds sheets are his spidery notes, but I never see him write anything down, or cheer, or react in any other way to the action unfolding overhead. I stare at him a lot, from about three feet away, but if he feels it he doesn’t show it. The sportsbook is a world inside the world, but he’s in a world inside that world. How much has he bet today — $50? An eccentric-millionaire-ish 50 grand? — and on what?

There’s this commercial that plays like a screen saver on the unattended sportsbook touch screens, an ad that depicts various young, well-dressed, good-looking people having fun with Cantor Gaming’s range of sports-gambling products, both at home and in a room not unlike this one. They’re laughing, they’re betting, they’re doing some top-notch wordless we’re-enjoying-ourselves acting. The climax is a tracking shot — as the words “WHERE LUXURY MEETS TECHNOLOGY” flash onscreen, the camera zooms down the length of the bar, in a clear homage to the Coen brothers’ Blood Simple (probably not), and finds two attractive young women in cocktail dresses, one blonde, one with auburn mid-period Milla Jovovich bangs. Girls’ night! A waitress approaches them with two glasses of champagne on a tray; within the space of three seconds of screen time — they are spectacular actresses — they express surprise and mirthful curiosity about the bubbly’s provenance, and as the waitress indicates who sent it, we cut to their POV on two guys in dark suits, a day-player Scott Speedman and his ambiguously ethnic Mark Sanchez–ian buddy, raising oddly small tumblers of beer. Cut to the men and the women together, clinking glasses, preparing to place a bet, although it’s clear they have all, in some sense, already won the night, and also life.

Contextually, in a room where no one is dressed up or breaking interpersonal ice of any kind, this commercial is wistful, ironic, like the Edith Piaf record playing in the middle of the rubble of the French village in Saving Private Ryan; it’s a glossy dream of what the sports-gambling experience could be like. What it’s actually like: Men in a room together watching television with the grim intensity of Mission Control personnel. The screens are all tuned to various network-TV NFL telecasts, so in between plays, commercials blare louder and larger than is probably psychologically healthy. I find myself staring at a large Burger King chicken-Parm sandwich, a giant Peter Griffin vomiting, a tube of AndroGel big enough to treat King Kong’s testosterone-production issues. I learn from Nevada congressional candidate Steven Horsford about what a terrible person his opponent, Danny Tarkanian, is, and vice versa. I stare into the enormous frowning face of Arnold Schwarzenegger in endless teasers for his upcoming I–nailed–Brigitte Nielsen interview on what’s being promoted as the “season premiere” of 60 Minutes. (60 Minutes has “seasons”? Whatever — I stopped watching after they killed off all my favorite characters.)

Jacksonville briefly takes the lead over Cincinnati, but I’m mesmerized by my seatmate. Dick Cavett unzips his cooler. I’m ready for anything to be in there — a human heart, artisanal peanut brittle with just a hint of fleur de sel, a live frog. What he takes out is a spoon wrapped in foil and something murky in a mason jar.

He unscrews the lid of the jar and starts eating what turns out to be a kind of cold bean soup with a layer of something white and solid on top of it. Firm tofu? Congealed sour cream? I decide it’s tofu. I decide he’s formulated this lunch for maximum protein content and low glycemic load — space food for gamblers. Luxury has met technology, and I am watching an old man eat a jar of mung.

It starts pouring in Jacksonville as the Bengals — who feel a little more like my Bengals now that I’ve got money on this — walk away with it, 27-10; by the end, I’ve even got some brethren up on the bar-dais, dudes in tank tops and board shorts, smoking exuberantly and hollering for Cincinnati. I have to go meet somebody on the other side of the hotel, and it ends up being about three hours before I can come back and claim my $38; when I do, Dick Cavett’s still there, staring up at the screen, his cooler full of God knows how many jars.