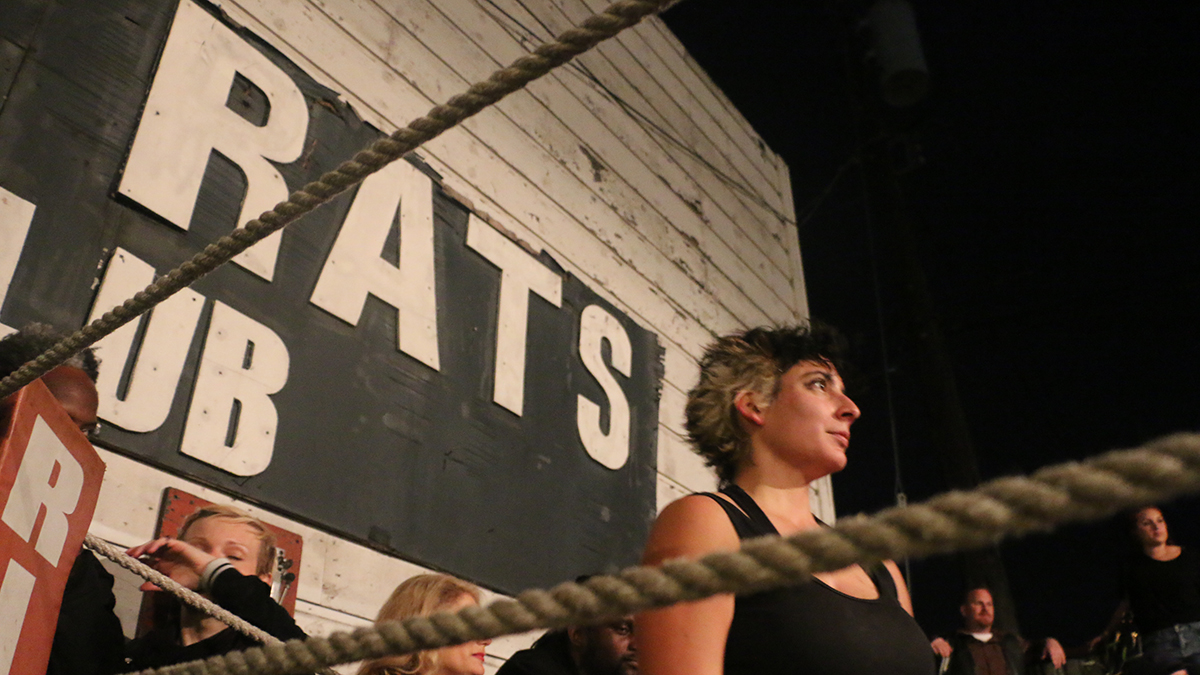 The attendees are sardine-packed into the East Bay Rats motorcycle clubhouse on San Pablo Avenue on a Saturday night in December for the second annual Marxism vs. Nihilism fight night. The Bay is host to a gradient spectrum of left factions and groups, and sometimes the most productive way to hash out their ideological differences is here, in the ring. A woman in a ruffled, hand-sewn black skirt plays a violin and croons, “Yes, we have killed the cops in our heads” and another lady in bright pink lipstick passes around a quart of Ancient Age bourbon. There are 450 motorcycle clubs in Oakland and most of them aren’t as politic as the Rats, who circulate among the crowd in black leather jackets. “We want everyone to feel comfortable here,” says Trevor Latham, the club’s president. “Everybody’s welcome — the gangsters, the cops, the anarchists, the Marxists. We walk a great line.”

Most of the plate-glass storefronts in downtown Oakland are boarded up. Over the last week, the city has convulsed from riots about the grand jury decisions not to indict the police officers who killed Eric Garner and Michael Brown. The thousands of dollars collected from the boxing event’s door go straight to the local Anti-Repression Committee to bail out those arrested during the riots.

Oakland is regularly the site of the most violent protests in the United States. The city has a long and contiguous history as a hub of left, labor, queer, and feminist movements. While Occupy Wall Street in New York was a mostly feel-good affair, Occupy Oakland was a pitched, street-by-street battle in 2011, with flaming Dumpsters, ripped chain-link fences, bonfires, flash grenades, and police beanbag guns. Even before then, in 2009, the East Bay experienced passionate uprisings over the police killing of Oscar Grant.

Dozens of other cities have protested over the Garner and Brown grand jury decisions, but outside of Ferguson, Oakland and Berkeley experienced some of the most heated unrest. Even as spectators drank beer and blew off steam at this boxing match, just a couple of miles away in Berkeley, large bands of masked protesters and UC Berkeley students were looting a Whole Foods and RadioShack, and drinking stolen bottles of prosecco around bonfires in the street.

In Oakland, anarchists and Marxists are the left flank of a political class that would be best described as Social Democratic. The outgoing mayor, Jean Quan, was a member of the Maoist Communist Workers Party in the 1970s. To be liberal is so common that there is plenty of space for more extreme ideological positions. In this bubble, the various Marxist, anarchist, and nihilist-anarchist factions subdivide into increasingly smaller parts per million. Elsewhere, the left huddles together for warmth, trying to appear as a popular front. 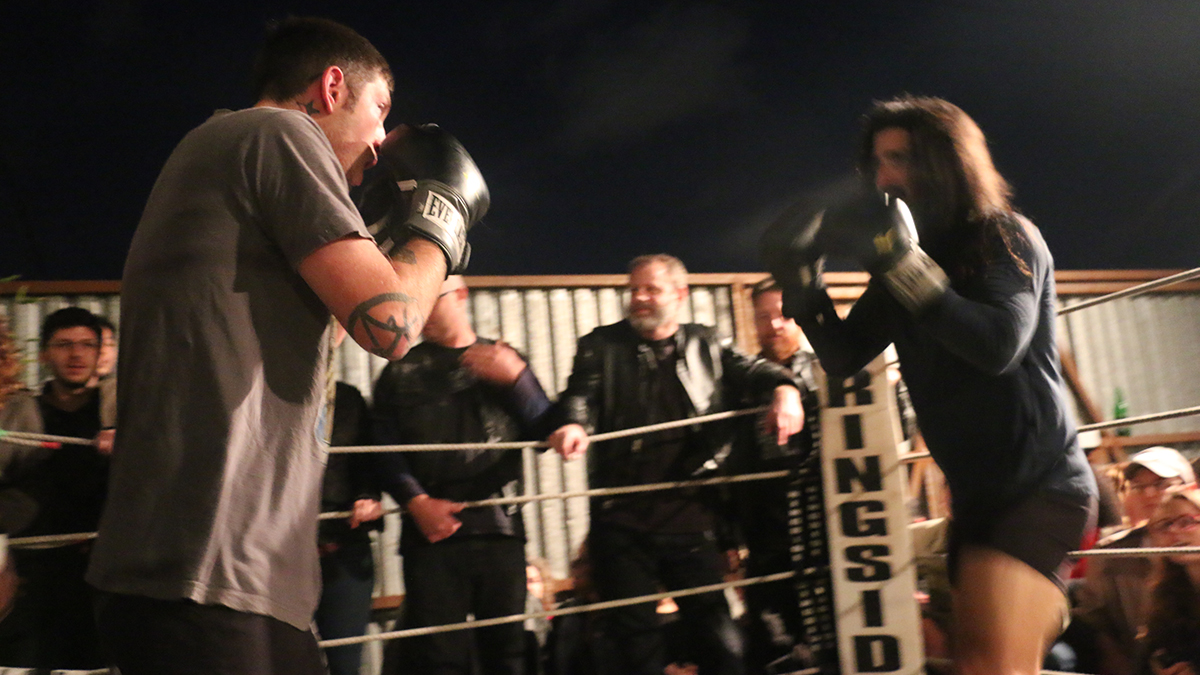 Before I arrived in Oakland, it was difficult to believe that adults could openly describe themselves as nihilists. Nihilists were teenagers in black trench coats who smoked clove cigarettes and believed in nothing, Lebowski. I spoke to Gregg Horton, one of the nihilist-leaning organizers of the boxing match, about this. “Nihilism has a strong line in the Bay,” he told me. “Both tendencies try to answer the question of what is to be done — nihilists think that doing things actually makes things worse.”

Marxists and nihilist-anarchists have a long and bitter history. The progenitor of nihilist-anarchism, Max Stirner, was an early inspiration to Marx. The other major anarchist thinker of the time, Mikhail Bakunin, was Marx’s rival. Even Bakunin and Marx’s lifestyle differences seem applicable to the divide today: Marx survived by working as a freelance writer and was a father who enjoyed petit bourgeois leisure activities like taking his kids to the park, while Bakunin was allegedly disheveled, smelly, and often needing to bum train fare to get to his lectures.

Animosity between the groups endures today. Every year, Marxists and anarchists clash in street battles in Santiago, Chile, on May Day. The same happens in Athens, Greece. When I was 19, I watched two anarchists beat up an old, beret-wearing Marxist outside an anarchist conference. He was selling Workers World newspapers for a dollar. “This is a noncommercial space!” the two youngsters warned him. When he wouldn’t stop, they bum-rushed him and ejected him off the steps. 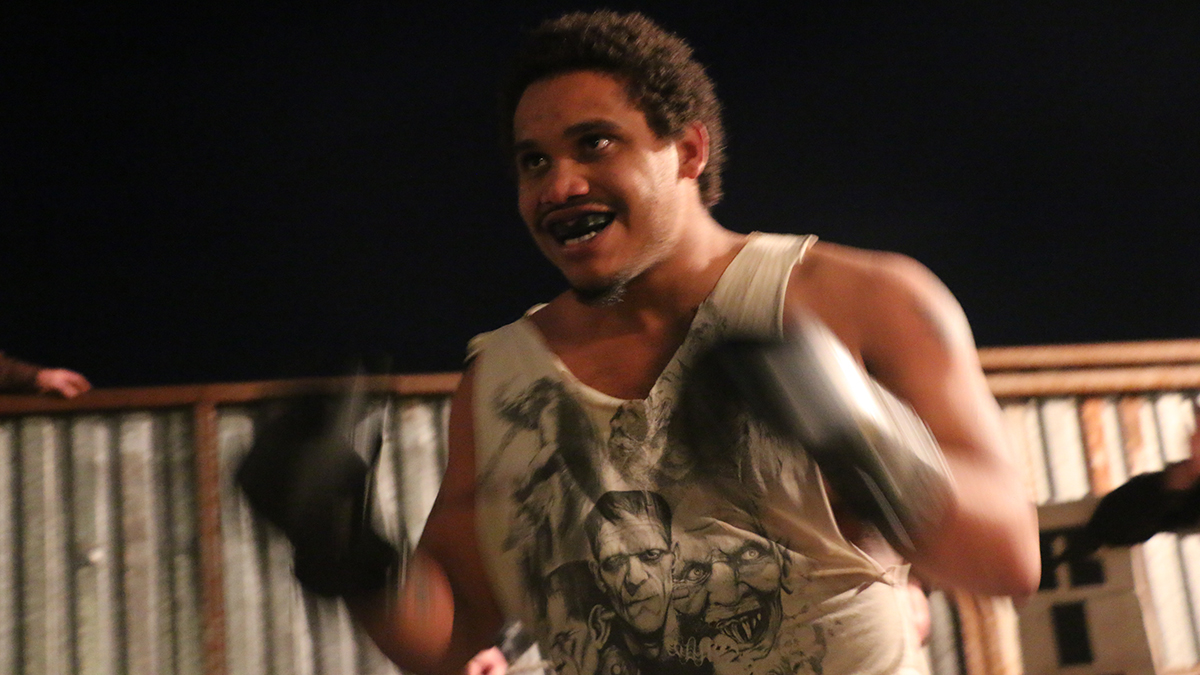 The fight night fundraiser in Oakland was just another chapter in the 150-year-old rivalry. “Let’s hear it for the Marxists! Now let’s hear it for the nihilists!” shouts the ref, a rockabilly-looking biker. Dozens of spectators watch from the roof of the Rats clubhouse. “Avenge Kronstadt!” someone shouts. The first match is between two sinewy women, Catherine and Melisa, an anarchist and a nihilist, respectively. Melisa practices Brazilian jiu-jitsu and teaches Chinese and Japanese martial arts within the anarchist scene. Catherine does Muay Thai, so the fight was held under MMA rules and featured fingerless gloves. After two rounds of grappling, Melisa is floored with a bloody nose. They hug after. They’re friends, comrades. A couple of fights later, two Marxist poet ladies go at each other for six rounds, only punching each other in the face, like Rock’em Sock’em toys, while a gaggle of cornermen scream, “Body shots, body shots!!!! Work the body!”

A Jerry Garcia–looking coach paces nervously, giving pointers between rounds, providing water, perhaps looking for fresh talent. The fights come one after another on the slick, muddied ring — loose and free-form, lasting until someone taps out. The main event, with actual political beef, is clear from the hush that comes over the crowd. 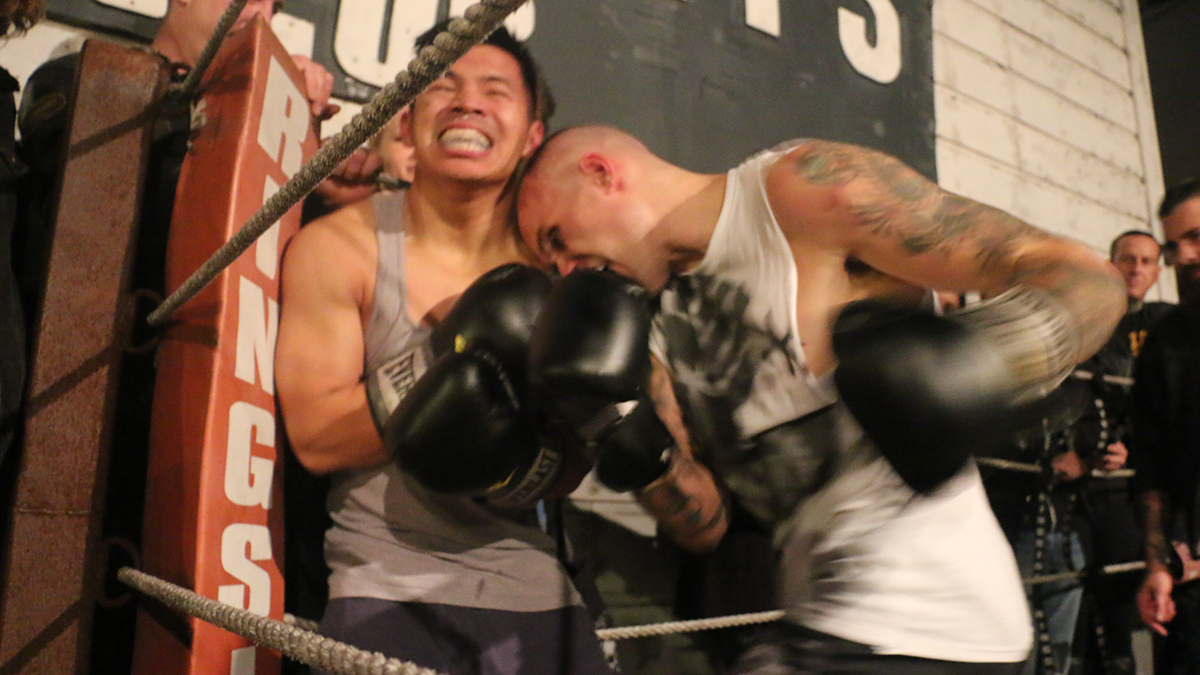 A bearded, middleweight “social anarchist” named Bryan emerges from a crush of admirers. He has challenged another activist he doesn’t know personally, a nihilist. Bryan, a high school tutor, is wearing a Nestor Makhno shirt.1 Cosmo, his opponent, is a big, smiling dude with stringy surfer hair. I asked Bryan why he challenged Cosmo and he said, “I guess this strain of nihilism I find repulsive, which is like hostility to people and the self-organization of lots of people and mobilization of lots of people. … Years of failure and internal bullshit of being anarchists has pushed people to come to these nihilistic conclusions: ‘Everything sucks, we’re never going to win, you can’t do anything.’”

Bryan is the crowd favorite, surrounded and goaded on by friends and comrades — apparently being a social anarchist means being popular. Cosmo, for his part, describes his view as “anti-civilization,” against “mass, mass movements, social transformation, mass society in general. … This idea of fighting against society for all the people in the middle, this battle of hearts and minds … leftism, libertarianism, PC language that appeals to abstract justice and equality.” He says he learned to fight from being queer-bashed growing up.

When the bell rings, a roar goes up from the crowd. Bryan prances around cockily, throwing up his gloves, but he’s quickly worn out by Cosmo’s relentless meat jacks. After six rounds of beating, Cosmo knocks him flat. Few people celebrate as Cosmo stands victorious — the lonely nihilist at the top of the mountain, against the masses, against the world. 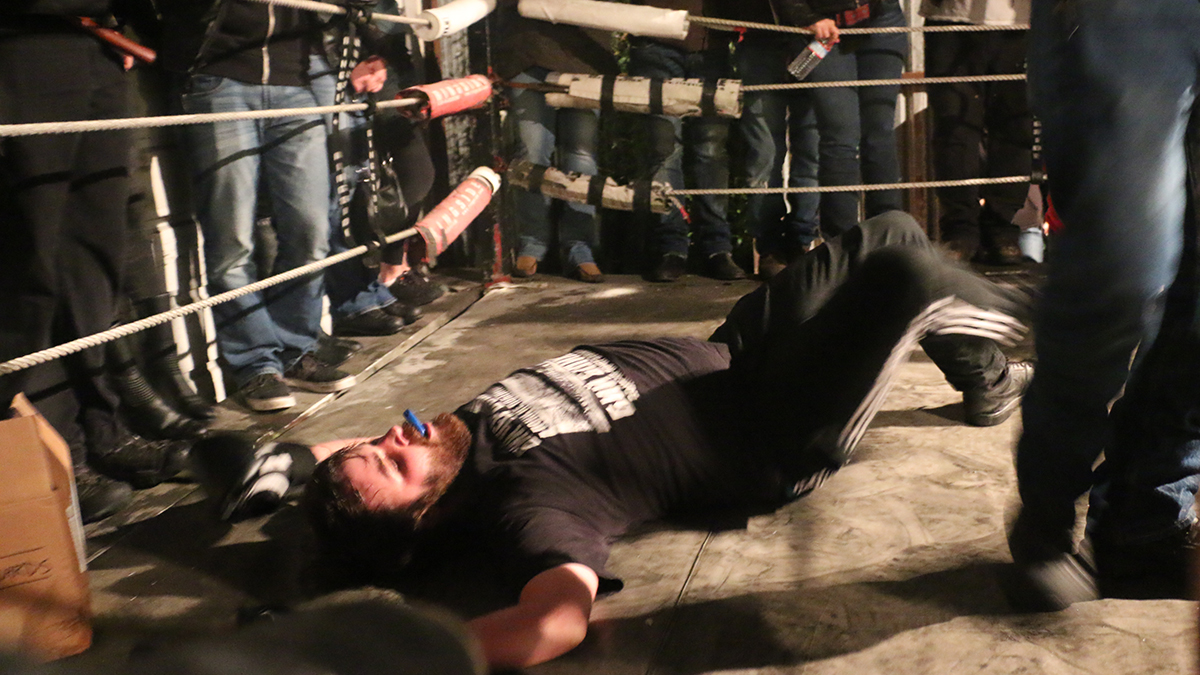 The next day, I attend the East Bay Anarchist Bookfair at a small arts-and-crafts bungalow called the “Humanist Church.” At a discussion under a canopy out back, a boxer from the night before is holding forth on his views. “Yeah, I’m a selfish nihilist … I believe in Nietzsche’s Eternal Return. Like, if you had to relive this all over again, would you do the 9-to-5 over and over again forever?”

At the tables of zines and small press books, I find Cosmo and congratulate him on his victory. He gives me a copy of a zine he made as a going-away gift. It’s a plain, black-and-white photocopied affair called Off the Leash.

I’m afraid to read it, assuming it will be full of Nietzsche quotes and juvenilia, but it actually turns out to be fascinating. It’s a collection of excerpted writings from forgotten turn-of-the-century French and Italian nihilists — pamphleteers, criminals, publishers, adventurers, free-love advocates.

Renzo Novatore — a turn-of-the-century Italian militant with the same dazed expression as Kafka in old photographs — burned churches, robbed banks, vandalized, stole, and deserted the Army during World War I. He eventually joined an anarchist bank-robbing gang but was killed in 1922 when they were ambushed by the fascist caribinieri. He was the rare kind of writer who lived with the same intensity with which he wrote: “The true original and spirited sinner should not die drowning in the slimy whirlpools of a slimier remorse, but rather enveloped in the rosy blaze of the greatest sin.” And that’s what he did — die like a true gangster.

These nihilist essays contained a refreshing string of wickedness — reading them felt a little like listening to Black Sabbath. Their sentences were like literary hand grenades, exhorting the reader to live to the hilt outside of society’s morality, without regrets — like a precursor to what today proliferates as “self-help writing” and is found all over the Internet as clickbait. As I flipped through the zine, I began to finally understand what these nihilists were getting at, beyond the selfish egotism, with Albert Libertad’s “To the Resigned”:

I hate resignation! I hate filthiness, I hate inaction.

I feel for the sick man bent under some malignant fever; I hate the imaginary sick man that a little bit of will would set on his feet.

When no one commands me, I do what I want. … I feel for the man in chains, surrounded by guardians crushed under the weight of irons on the many.

Aaron Lake Smith is a writer from North Carolina. He is a former senior editor for Vice.