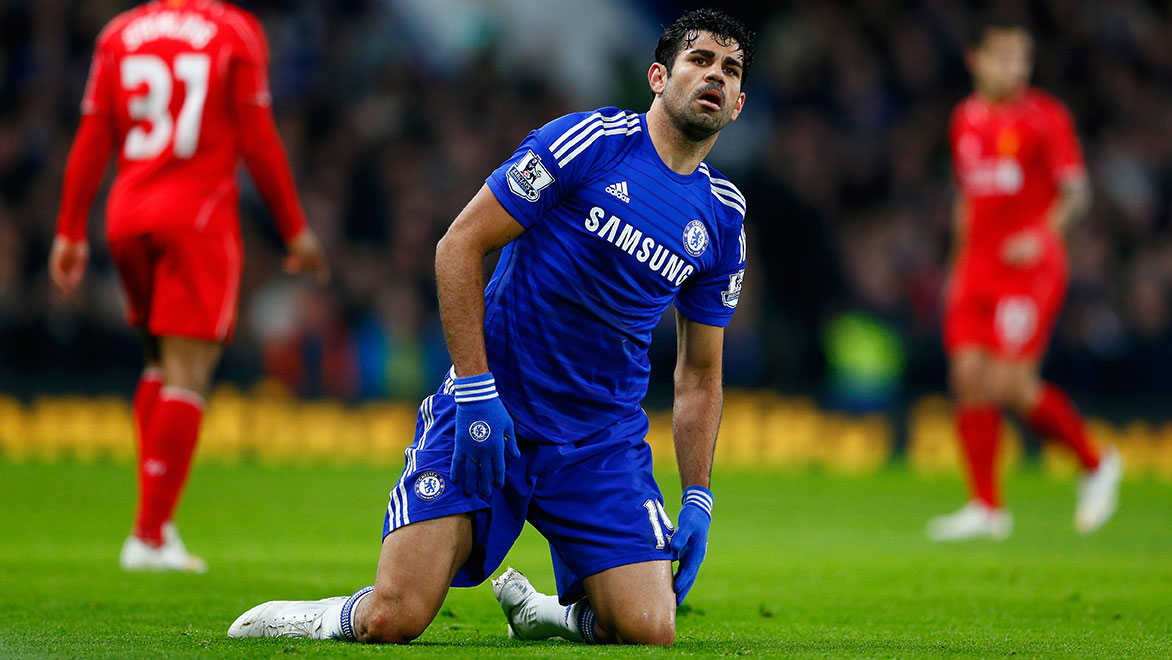 Yesterday, Chelsea beat Liverpool, 1-0, in extra time of the semifinals of the League Cup. Branislav Ivanovic scored the winner, Thibaut Courtois continued to be the best octopus Stamford Bridge has ever seen, and Diego Costa stomped on two ankles and Kam Chancellor’d Steven Gerrard. In light of Costa’s performance, we’re breaking out “Left Brain–Right Brain” to assess the Spanish striker’s antics.

Ryan O’Hanlon: I want to say that I hate Diego Costa but, well, hate is a strong word, after all. So let’s say, instead, that I find myself — more often than I’m comfortable admitting — rooting for someone to accidentally punt a ball into Costa’s face, for a stray elbow to find its way into his stomach, for that weak-ass 2004 BL86 asteroid to finally stop screwing around and just enter Earth’s orbit and decimate the exact spot — all right, I’ve already gone too far.

But this is what Costa does, right? He nags and needles, slaps and stomps, grabs and pinches. And he keeps doing it until you’ve lost your mind — or at least lost your focus. He’s, as Chris Ryan said to me earlier, the Patrick Beverley of the EPL if Patrick Beverley was also Chris Paul. He’s the dude who snaps your thumb at the bottom of the fumble pile if that dude was Luke Kuechly. He’s the Internet’s greatest comment-section troll, who also just won a PEN/Faulkner Award.

He's not that sort of player. pic.twitter.com/vWKjDpQguC

Here’s the thing: Costa’s really good at soccer. He’s on some goal-every-90-minutes shit, which seems both totally unthinkable and completely unfair. When Chelsea signed him this past summer, pairing him with José Mourinho felt too perfect. He’d run into, around, over, and through opposing defenses; he’d be the tip of the battering ram that’d bull-rush Chelsea’s counterattacks over the goal line — and, well, that’s exactly what he’s done.

Normally, I’m fine with greatness propped up by high jinks.1 But not with Costa, for some reason. He stomped out two dudes yesterday, and I can’t help but feel he would’ve been sent off were he not Diego Costa. He’s also not that fun to watch! Chelsea’s attacking midfielders all make economy look beautiful with their slick movements in and out of space, but Costa’s all straight lines and right-ahead power. I’ll pass on watching brutalist architecture come to life. Now this is maybe nothing more than a Liverpool fan’s personal vendetta that’ll burn off over the coming days, but I wonder: For all the benefits of Costa’s steady gooning, will it eventually reach a point when the negatives finally outweigh the positives?

Mike L. Goodman: The other thing about Diego Costa is that he knows exactly what he’s doing. It’s comforting to think that when players act out, when they kick a guy, throw an elbow, or do whatever else, that it’s out of some irrational emotions that bubble up during the game. In that case, everything’s a regrettable mistake. “Well, sure the angry striker choked that central defender, but it was in a fit of pique. He’s really not that type of player.” Setting aside whether that’s a valid argument, it’s abundantly clear that it doesn’t apply to Chelsea’s striker.

Costa is as cool and calculating as they come. All the taunts, the tugs, the kicks, the stomps — they’re all designed to walk exactly up to that line, dare the referee to make a game-changing call, and then live on to fight another underhanded battle. Since moving to Atlético Madrid, Costa has played 165 games in La Liga, the Premier League, the Europa League, and the Champions League.2 Over that time, he’s been whistled for 271 fouls and been handed 46 yellow cards. Despite all of that, he’s been red-carded exactly once. That was in the last game of the Europa League group stages in December 2012, and Atlético had already clinched their spot in the knockout rounds by then. Those aren’t the stats of a player who loses his head; they’re the stats of a player who makes you lose yours. (Somewhere Pablo Zabaleta is nodding.) What makes Costa so profoundly frustrating for opponents is that he isn’t a player who makes his team better despite his outbursts. He’s a player who makes his team better because of them.

Yesterday, there was a moment in extra time when Costa and Steven Gerrard got tangled up. This, of course, is a euphemism for the moment when Costa tackled the Liverpool captain NFL-style, then held him down, and then glared at him angrily when Gerrard finally, forcefully, got up. Eventually the two players did that thing where they touch foreheads, both clearly letting each other know that if it wasn’t for those damn rules your nose would be broken. As the pair was separated and Gerrard’s teammates came rushing to his defense, Costa just stood there, almost smirking, and nodded a couple of times as if to say, “Yep, job’s done.” Then he walked over to the ref and got his yellow card. It was his first of the game. It was the 102nd minute.

The arts Costa practices may be dark, but there’s not a doubt in the world that he’s a master of them.