Did Kain Colter and Northwestern Just Put the NCAA on Notice? 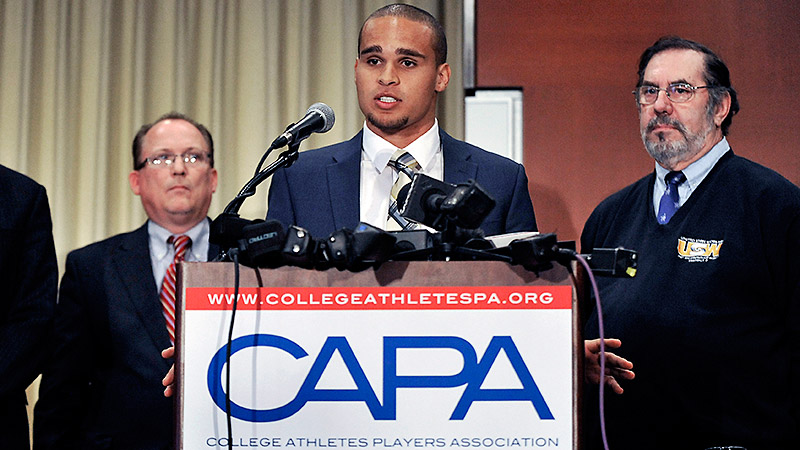 Yesterday, Northwestern football players won the right to form a union. Peter Sung Ohr, a regional director for the National Labor Relations Board, handed down the decision. What does this mean for student-athletes at Northwestern and elsewhere, the ongoing pay-for-play debate, and the future of the NCAA? Let’s break it down in Q&A style:

What do I need to know about Peter Ohr, who made the ruling?

Ohr has worked for the NLRB since 1997. He was born in South Korea and a bio notes he was “the first Director of Asian heritage in the NLRB’s then 76-year history.” Ohr was appointed by NLRB’s general counsel, who was appointed by President Obama.

What was the most interesting part of Ohr’s decision?

The level of harrowing detail about the lives of college football players. Ohr’s report could almost be a sidebar to Taylor Branch’s famous piece in The Atlantic.

Ohr wrote about the extent to which Northwestern keeps players under its thumb. Northwestern controls where players can live (their leases have to be approved by the coaching staff); when they can talk to the press (rarely and then only with permission); whether they can curse in public (they can’t); and who they can be friends with on social media (“the players are prohibited from denying a coach’s ‘friend’ request”).

Seeking to further establish Northwestern’s “strict and exacting control” over its players, Ohr went on to lay out a player’s daily schedule during August practice:

And on and on until the required “lights out” at 10:30 p.m. That’s before football season starts. During the season, a player figures to spend 40 to 50 hours per week on football.

The upshot, according to Ohr, is that Northwestern is treating its players like employees — very busy employees. “[I]t cannot be said the Employer’s scholarship players are ‘primarily students,’” he wrote.

What about the whole “football players are already paid; they get scholarships” argument?

That’s usually an argument against paying athletes, but in this case the argument was at the heart of the players’ case. Led by former Northwestern quarterback Kain Colter, they argued that if they’re given schollies and put to work for the long hours outlined above, they’re real, honest-to-god employees rather than “student-athletes.”

This particular case was narrow, but it’s very easy to see the potential ramifications. As one former NCAA apparatchik told the New York Times, “Northwestern is the straw man. This is about the N.C.A.A.”

What was the most striking sentence in the report?

This one: “Eligible to vote are all football players […] employed by the Employer located at 1501 Central Street, Evanston, Illinois.”

It makes the Northwestern campus sound like a gloomy Rust Belt factory where the employees walk out with dead eyes and sweat and grime on their brow. Which, I guess, was part of the players’ point.

That would be Ramogi Huma, president of the College Athletes Players Association. Huma, who filed the Northwestern petition, has been battling for players’ rights since he played linebacker at UCLA.

For years, the NCAA cited Huma’s relationship with the United Steelworkers as a reason for refusing to meet with him. After Wednesday’s decision, Huma gloated: “It wasn’t even close — we won every point.”

Is it safe to assume Northwestern will try to string this out?

Yes, the school will appeal. But ESPN’s Lester Munson thinks it’s a long shot, because the NLRB is stocked with Obama appointees. The group will probably be sympathetic to the players.

If the players win in Washington, the New York Times notes, Northwestern could still decline to bargain with them. If that happens, the case would wind up in federal appeals court.

What are people who oppose the ruling saying?

A lawyer for the NCAA gave the Times the old jive about how the “system” has worked for years (for the NCAA, that is). One sportswriter thinks players ought to have more rights, but that unions are the wrong mechanism through which to get them, because they coddle “poorly motivated workers.”

An interesting objection comes from Samuel Estreicher, who teaches labor and employment law at New York University. He notes that Ohr didn’t give Northwestern’s walk-on players the right to unionize. That follows from Ohr’s thinking that accepting a scholarship is what makes a player an “employee,” but it creates an odd distinction between two classes of player. “Can you have a different rule for those two guys?” Estreicher said. “I don’t think so.”

So Northwestern football players can go on strike during the Wisconsin game?

I thought they did that last season!

I kid. At some theoretical-possible-potential-distant point, yes. But as Deadspin shop steward Barry Petchesky says, we’re a long way from there. The players would have to survive the subsequent legal challenges from Northwestern. And form a union. And collectively bargain with the school. And finally decide that the conditions of college football are so awful and dehumanizing, and Northwestern so truculent, that striking was the best recourse.

More likely, this is a small step toward helping to bring about bigger, more fundamental change, especially amid the ongoing Ed O’Bannon case. “My thinking is it’s a leverage point for pressure on the NCAA,” Estreicher said.

Crap, you probably have the working title for the inevitable 30 for 30 doc about this, with Jay Bilas and James P. Hoffa as talking heads, don’t you?