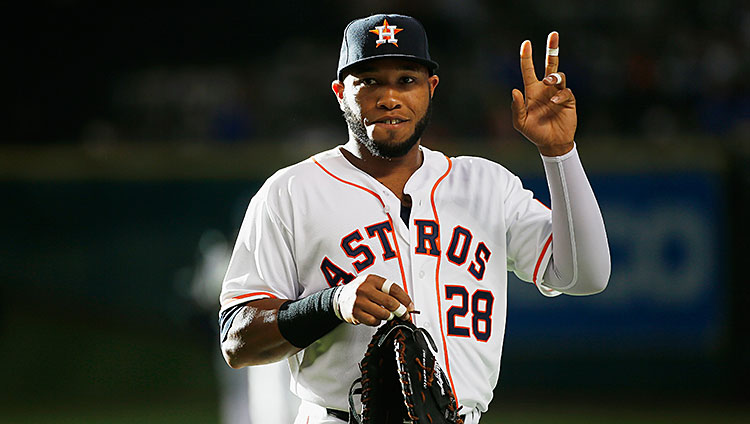 We’re going to keep this brief because I don’t want to tread too heavily on ground that I am unfamiliar with. Am I familiar with Jon Singleton? Well, I have a soft spot for Higher Learning, and think the Shaft reboot is actually a little underrated, but for the most part, yes, I am unfamiliar. Doughboy jokes aside, the only thing I know about Singleton is that he is 22, was considered a pretty hot Phillies prospect for a while, and was traded for Hunter Pence in a deal that — cue butterfly effect — produced this iconic moment on television:

While part of the Houston organization, Singleton battled what he called an “addiction” to marijuana. He was suspended for 50 games last season, and announced during spring training that he had spent some time in rehab. He started out this season with Houston’s Triple-A team in Oklahoma City, where he put up decent numbers.

On Monday, the Astros signed Singleton to a five-year, $10 million deal. With bonuses, Singleton can make upward of $35 million over the course of his contract. There are also three club-option years written into the deal, in case Houston wants to cut bait. You usually see one or two in a deal, so this is a bit abnormal. From the perspective of someone who admittedly does not know a ton about baseball contracts, this looks like a rebuilding team making an investment in a young player, locking him up with the franchise for the long term while maintaining some financial flexibility and wiggle room in case any off-field issues pop up again. If Singleton shows up to the ballpark one day looking like this dude, the Stros will not be caught holding the dime bag.

How did Singleton respond to this deal? He came out against the Angels and homered in his major league debut, bat-flipping on fools, much to the delight of his teammates, who celebrated in the dugout.

But — Inception bongs — not everyone was high-fiving. A few folks, like Orioles hurler Bud Norris, took issue with the precedent the signing set. Norris, who spent some time in Houston, tweeted this:

Sorry but this Singleton deal is terrible. Wish the Jon listened to the union and not his agent.

It would appear that Norris is salty that Singleton took decent money early rather than betting on himself. If more young players opt for early career security over the gold rush of free agency, then it could have a domino effect on the economics of free agency across the board. Again, cue butterfly effect, somehow Bud Norris’s money (he’s a free agent in 2016) could be affected by Singleton’s decision.

Norris wasn’t the only player to weigh in on Singleton’s deal. Mark Mulder chimed in with some words of inspiration.

Just saw contract this #astros prospect signed. Either he doesn't believe in himself to be great or he has a terrible agent who wants the 4%

You sound like my high school gym teacher, bro. You could make the case that Norris, a former Astros player, might have some inside info on the deal, and thinks Singleton is getting jobbed. But Mulder really has no place at the table.

First of all, it’s gauche to publicly talk about what another adult makes. Mind your own business; just because you’re in a union with Singleton doesn’t mean you’re his father or his accountant. If that’s the deal Singleton wanted to take, that’s up to him and his checking account. Does it give the Astros a lot of leverage going forward? Maybe. Is it a bad thing? Probably only for guys like Norris, who has a lifetime 41-54 record.

Second, maybe it’s time to break out of the “if player X makes this much, player Y is going to get paid this much.” You always hear about that whenever a big baseball deal is signed. “Oh, Scott Boras must be sharpening his fangs because now he can get this juiced-up first baseman $150 million.” Chill with that. Players should be allowed to make the deals that work for them. I am definitely pro unions in life, but I hate it when they are geared more toward the needs of average veterans like Norris instead of younger players like Singleton.

This should be a happy moment for Singleton. He just signed his first big league contract, he’s going to be a millionaire, and the Astros clearly want to build around him. If Bud Norris is worried about how that affects his future bargaining power, there’s one thing Bud Norris can do about it: pitch better.

#HotSportsTakes: Do You Believe in Phil Mickelson?