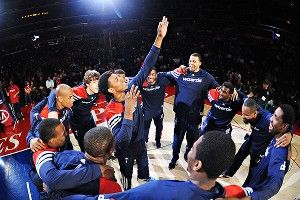 This all comes to us, as most of these things do, from the Washington Post, whose reporters continue to bravely carry on from the front lines of Wizardry. Nick Young crashed a wedding in Phoenix this weekend.

Young was “wandering through the lobby of the Ritz-Carlton hotel in a leather jacket, baseball cap, flip-flops and socks” when he came across the ceremony. Members of the wedding party recognized Young, and he was invited in. The DJ then announced his presence and he gave an impromptu toast. “I just said, ‘Congratulations to the bride and groom,’ I didn’t know nobody,” Young said. “I went in there and gave a speech. I was a wedding crasher. Will Ferrell. I didn’t have nothing else to do.”

Just a heads-up, Will Ferrell actually crashes a funeral in Wedding Crashers. But WHO CARES. I gotta go get married because maybe Evan Turner and Spencer Hawes will crash my reception.

(Via Michael Lee and Dan Steinberg.)