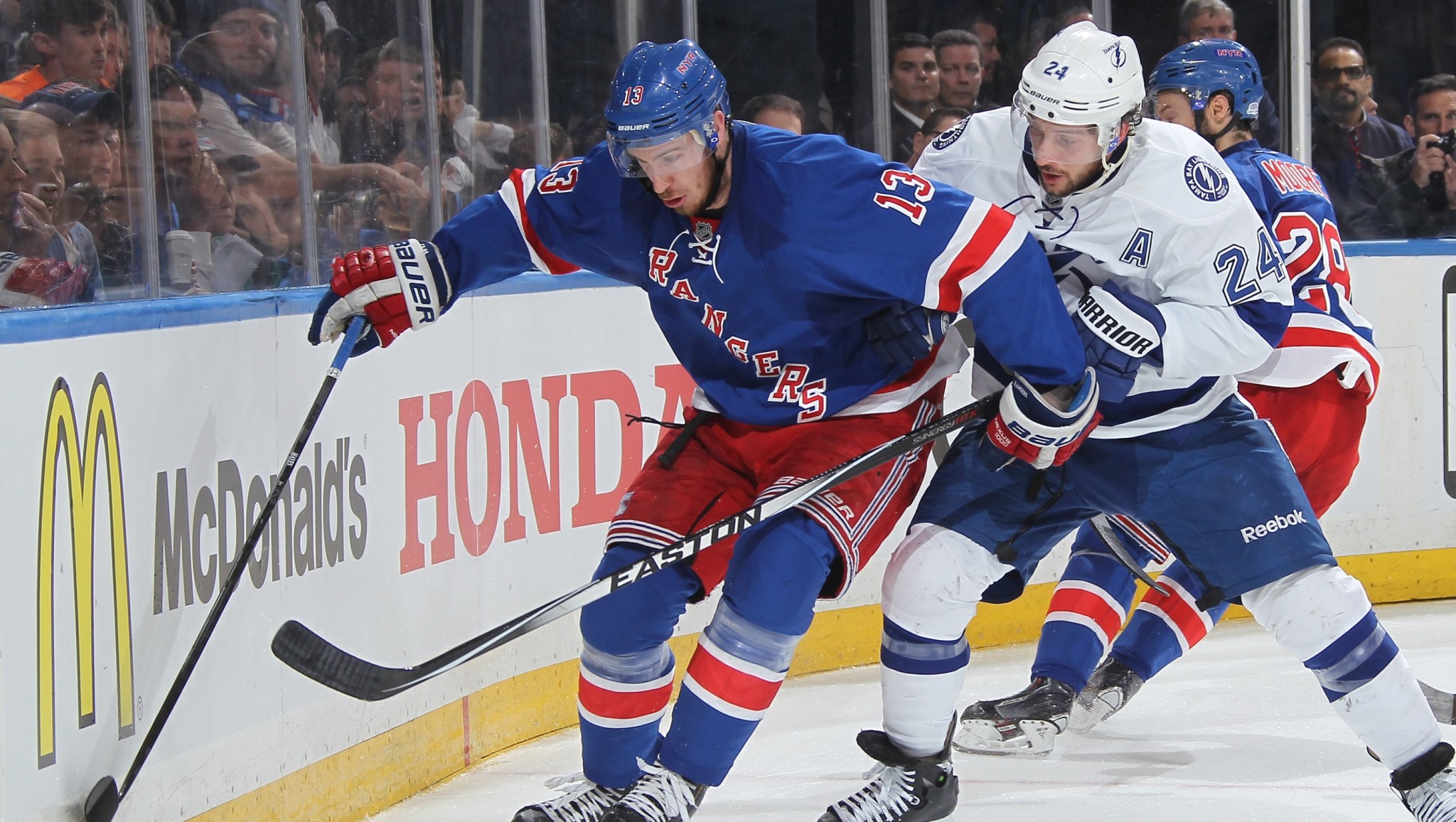 The NHL conference finals kicked off over the weekend with a pair of afternoon games. Both home teams came out with wins, with the Rangers edging the Lightning 2-1 on Saturday and the Ducks beating the Blackhawks 4-1 yesterday.

Here are 10 thoughts on what you missed while you were outside in the sunshine doing something other than watching hockey:

1. It’s time to start talking about Frederik Andersen. Ducks fans will no doubt argue that we’re a few weeks late on this, but you could be forgiven for not quite trusting Andersen heading into the playoffs. He didn’t play well in last year’s postseason, and his numbers this season were decent but not especially impressive. With John Gibson waiting in the wings, there was a decent chance that Andersen would eventually cough up the starter’s job altogether.

Ten games later, Andersen is looking rock solid. Yesterday he made 32 saves, including an early beauty on Patrick Kane that helped the Ducks weather a shaky first period. He’s not standing on his head and stealing games — he doesn’t need to, for reasons we’ll get to in the next section. But with the Ducks firing on all cylinders, they could probably get by with goaltending that was merely adequate. Andersen has been far better than that, and he’s a big reason why the Ducks are now 9-1 since the playoffs began.

2. The Ducks keep finding the net. They beat Corey Crawford three times on just 26 shots, and are now shooting 9.8 percent as a team at even strength in the playoffs. That’s a full 2 percent better than the St. Louis Blues, who rank second, and it’s well above the 9.03 percent with which the Lightning led the league during the regular season (when scoring rates were higher).

This is the place in any discussion of percentages where the word “unsustainable” makes its inevitable appearance, and that’s appropriate here even though the Ducks are certainly talented enough up front that you’d expect above-average shooting. Does that mean they can sustain 9.5 percent? Not over a full season, no, but right now they’re just seven wins away from a Cup, so regression to the mean better hurry up if it intends to put in an appearance for anything beyond a parade.

Another good sign: On Sunday, it wasn’t even the big names who were scoring, with Ryan Getzlaf limited to one assist and Corey Perry held pointless for just the third time in the playoffs. Secondary scoring is crucial at this time of year, and the Ducks are getting it.

3. The Blackhawks really miss Michal Rozsival. The veteran defenseman, who suffered a fractured ankle in the Hawks’ series-clinching win over the Wild nearly two weeks ago, isn’t exactly the first player you’d think of as an irreplaceable piece of Chicago’s roster. But his absence was felt yesterday, as an already thin Hawks blueline now seems stretched dangerously close to the breaking point.

Rozsival’s absence leaves Chicago with two defense pairings that it seems to trust. Veteran Kimmo Timonen barely played, clocking in at just over five minutes. And David Rundblad saw a little over 10 while managing to play a key role in each of the first two Ducks goals. It was a rough night for the 24-year-old, and the Blackhawks will need him to find his game quickly. Their top four defensemen are a very solid group, but it’s asking a lot to expect them to shoulder such a heavy load for up to 13 more games.

4. The Ryan Kesler vs. Jonathan Toews matchup will be fun. With home ice and the last line change, Ducks coach Bruce Boudreau chose to match up Ryan Kesler’s line against Jonathan Toews. This is pretty much the exact sort of matchup the Ducks had in mind when they acquired Kesler in the offseason — a chance to play tough minutes against one of the West’s elite two-way centers. On Sunday, Kesler, Jakob Silfverberg and Matt Beleskey got the job done, holding Toews, Marian Hossa, and Brandon Saad pointless. (Silfverberg later added an empty-netter.)

Toews is a hard guy to keep down, and of course the Hawks will have the option to get a different matchup when the series shifts to Chicago. But if the Ducks can so much as break even with those two lines on the ice, they’re in great shape in the series.

5. All things considered, the Blackhawks really didn’t have a bad game. They outshot the Ducks, most notably in a dominant first period in which they held a 16-7 edge but couldn’t beat Andersen. They stayed disciplined, taking only one penalty. And they got uncharacteristically bad performances from usually dependable guys like Toews and Duncan Keith, yet were one goal away from tying the game until late in the third. Even Boudreau acknowledged as much after the game, saying that the Ducks were “going to have to play better if we want to continue to stay with these guys.”

This is the conference finals and there’s not much room for moral victories. But the Blackhawks played a decent road game that could have translated into a win with an extra bounce here or a bit more finish there. They’d rather have the victory, of course, but we didn’t see anything on Sunday to make us think that the Hawks can’t win this series.

6. The Rangers are getting predictable, and they’re fine with that. As we pointed out in last week’s preview, the Rangers came into the series with eight of their 12 playoff games ending with the same 2-1 score. After Saturday’s win over the Lightning, we can make it nine. That also runs the Rangers’ streak to 13 straight one-goal games in this year’s playoffs.

So what’s going on? Some of this is just a fluke — at the very least, you’d think we’d see an empty-net goal or two to pad out some of those leads. But there’s no doubt that this is the sort of playoff game the Rangers are built for, and it’s one they’re very comfortable playing. Henrik Lundqvist has given up just one goal in eight of the team’s 13 games, so the Rangers game plan is pretty clear: If we can score twice, we’ll probably win.

The strange thing about the Rangers’ run of tight, low-scoring games is that they’re not necessarily playing a boring style. “Exciting” is probably too strong a word here, but these aren’t the usual neutral-zone slogs, where two teams trade dump-ins without generating any real offense. There are scoring chances in Rangers hockey. They just don’t go in, thanks largely to factors both good (Lundqvist) and bad (a struggling New York forward group). And so, game after game, we watch them go back and forth, waiting for the inevitable one bad bounce that will decide the winner.

It’s probably not an ideal system, but it has them seven wins away from a Stanley Cup. And we can probably guess what the score will be in most of those.

7. Lundqvist may be running away with the Conn Smythe. This is the time of year when we start narrowing down the field for the Conn Smythe, the award given to the playoff MVP. And typically, at this point each surviving team is down to a handful of candidates. That’s the case this year with most teams. Chicago has Kane, Toews, and maybe Keith. The Lightning vote would be split between Tyler Johnson and Ben Bishop. In Anaheim, you’ve got Perry, Getzlaf, and Andersen.

But not the Rangers. In New York, it’s Lundqvist or bust. Barring injury, if the Rangers win the Stanley Cup, he’s already a lock. And he’s playing so well that it may be time to start talking about his chances even if the Rangers don’t win. It’s rare for a player from a losing team to win the Smythe, but it happens,1 and when it does it’s almost always a goalie.

The Rangers and their fans don’t want to even consider that scenario right now. But the rest of us might.

8. The Lightning are still waiting on Steven Stamkos. Stamkos is the Lightning’s best player, their captain and their leading scorer. But he’s been fairly quiet so far in the playoffs, posting just three goals and often looking like a guy who’s just not himself.

On Saturday, he was largely a non-factor, registering just a single scoring chance on two shot attempts while ranking sixth among Lightning forwards in ice time. And in a somewhat surprising move, the Rangers didn’t even deploy their top defensive pairing against the Stamkos line; he was matched up with Marc Staal and Dan Boyle instead. The Rangers used the Ryan McDonagh/Dan Girardi pairing against the Tyler Johnson line, which coach Alain Vigneault described as “their best line so far” when asked about the move yesterday. “Not to say that the Stamkos line is not a big threat also,” he explained, “but throughout their first series, Johnson’s line has been the more effective.”

It’s hard to argue with that, but you still get the sense that the Stamkos breakout could be coming.  With Lundqvist red hot and goals at a premium, he probably has to take over a game or two if the Lightning are going to have any chance to win this series.

9. It feels like we’re headed toward a tipping point on the NHL’s low-scoring games. Hockey’s dead-puck era began in 1995, with scoring rates settling in at about 5.5 total goals per game since the late ’90s.2 Save percentages are soaring, goaltenders are better than ever before (while getting bigger and bigger), and every team plays a structured defensive system. And goal scoring drops even further in the playoffs; this year has averaged about 4.9 per game, and 13 of the 16 playoff teams have averaged 2.5 or fewer goals per game.

Not everyone sees this as a problem — like your views on pop music, your opinion on how much scoring is the “right” amount tends to be based on whatever you grew up with — and it’s certainly true that there is such a thing as an exciting low-scoring game. But there’s also such a thing as a deathly boring low-scoring game, and a steady stream of defensive battles this spring seems to be renewing calls for the league to do something to give scoring a boost.

There’s a relatively easy solution — make the nets an inch or two bigger all around — but it’s one that plenty of hockey fans hate. So instead, we’ll probably get another offseason of half-measures (remember when slightly shallower nets were going to make a difference?) and calls for restrictions on equipment size, none of which will move the needle at all. Would four more weeks of 2-1 finals change that? We might find out.

10. Good news: The schedule starts making sense now. When the NHL announced its schedule for the third round, featuring a seemingly unnecessary two-day layoff before a pair of afternoon games to kick things off, more than a few hockey fans complained, including this one.

So in the interest of fairness, let’s take a minute to point out that the rest of the month looks pretty much perfect. You’ve got one game every night, with the two series alternating on every-second-day schedules. No afternoon games, no back-to-backs, and no weird gaps until (and if) we get to Game 7, at which point both series would get an extra day. The later start times are a bit of a pain, but that’s nit-picking. When the playoffs start, the NHL schedulemaker may be more inconsistent than Rick Nash. But for the next few weeks, he has done his job well.