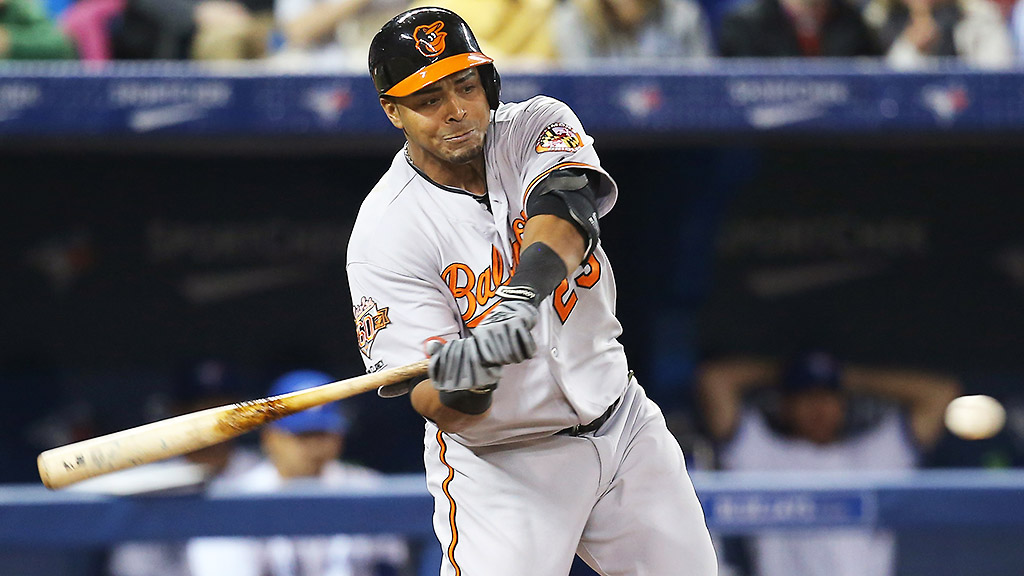 Nelson Cruz hit two home runs last night, and while I’m not ordinarily a huge Cruz fan, I can’t deny that he’s having an incredible season: Those two homers were his league-leading 18th and 19th, and he’s slugging an AL-best .663. About eight hours north, Melky Cabrera is hitting .314/.357/.498 while serving as a key cog for the first-place team in a jumbled AL East. Ryan Braun is in line to start the All-Star Game thanks to the fan vote. Business is business.

Meanwhile, Alex Rodriguez is home making kissy faces at himself in the mirror. Roger Clemens and Barry Bonds, perhaps the best pitcher and hitter of all time, can’t crack the Hall of Fame.

And I don’t get it. Why do we sometimes care so much? Using PEDs is cheating, right? Well, it’s also cheating if a pitcher puts pine tar on his neck when he’s on the mound, but when Michael Pineda returns from the injury that followed his suspension, we’ll all move on. If a pitcher has a reputation for doctoring the baseball, we think it’s almost cute. If an MVP gets caught with elevated testosterone levels or in the wrong sleazeball’s notebook, though, he receives eternal damnation. Why?

About a year ago, The Score’s Dustin Parkes wrote about how steroid panic is the remnant of a Cold War bogeyman, and he has a point. Just look at the training montage from Rocky IV: Who gets injected with an unidentified substance? Not Rocky Balboa, hero of America, capitalism, honor, and justice. That’s for sure. Maybe there’s something to that. Maybe it’s not just a coincidence that MLB handed out 12 50-game Biogenesis suspensions to 12 foreign-born players. Or maybe the kind of milquetoast bourgeois Americans who run and cover organized sports just have that familiar internal fear of anything stronger than nicotine, alcohol, or ibuprofen, the fear that brought us Reefer Madness. That drugs belong to an undesirable caste of society is a familiar refrain.

But I think it has even more to do with baseball’s obsession with numbers and history. That less-progressive members of baseball culture will talk about how they don’t care about stats in one breath and then talk about the 300-win club in the next would be a straw man if it weren’t true. If Braun hadn’t beaten out Matt Kemp for the MVP in 2011, his PED story would surely have ended differently. If Bonds and Mark McGwire hadn’t broken beloved home run records and if Clemens hadn’t won seven Cy Youngs or struck out 4,000 men, we’d view their transgressions differently as well. If Cabrera hadn’t won a batting title in 2012, the commissioner’s office wouldn’t have seen fit to rewrite history, as if Bud Selig hadn’t read 1984 or The Crucible.

We love our history, and we want our history to be pure, and if the yawning volcano of our collective cultural guilt demands a virgin, we’ll gladly cough up 12 names from a notebook in Miami and sacrifice the greatest baseball player of his generation.

This year, Selig will wrap up a tenure in which baseball reached unprecedented heights in terms of both quality and popularity, but he did so at the cost of unprecedented labor strife and billions in taxpayer dollars lost to publicly funded stadium deals. So before he goes, he wants us to know that his opposition to drug use is ironclad. Nobody looked the other way for 20 years while steroid use made baseball more popular than ever; we’ve always been at war with PEDs.

Yet even though that war has probably made permanent pariahs out of A-Rod and Bonds and others, I’m encouraged. Cruz, Cabrera, and Braun have assimilated anew, as have Jhonny Peralta, Antonio Bastardo, Francisco Cervelli, and others. And that means we might be moving on. No other major American sport has athletes who would benefit less from PEDs than baseball, and no other major American sport, to date, has wallowed in its drug problem more than baseball has. Maybe that’s changing. Maybe we’re ceasing to view PED use as a culture-threatening scourge. Maybe we’re instead starting to view PED use as a violation of professional ethics that brings codified consequences that we can accept like adults.

“None of us would like to have our whole life judged by our worst decision,” Orioles manager Buck Showalter said earlier this season. There are unforgivable crimes, and, like members of any other industry, baseball players, coaches, and owners commit them with alarming frequency. But cheating at baseball, and even lying about cheating at baseball, shouldn’t count among those crimes. Not when we forgive and forget real-world immoral or even criminal acts with real-world consequences and, most importantly, real-world victims. PED usage is an embarrassment, but it’s not a felony.

PEDs are part of our culture and our history, and nothing anyone can do will change that. And that’s OK. We can acknowledge that, understand that, and then learn to move on. Nelson Cruz has 19 home runs. Ryan Braun is getting a ton of All-Star votes. Jhonny Peralta signed a fat free-agent contract. The game is moving on with those players, and thankfully, we seem to be moving on as well.

Ibaka's Return Fuels More 'What If' Questions About James Harden

Westbrook Illustrated: How Russ Has Transformed Into a Shooting Star