Westbrook Illustrated: How Russ Has Transformed Into a Shooting Star 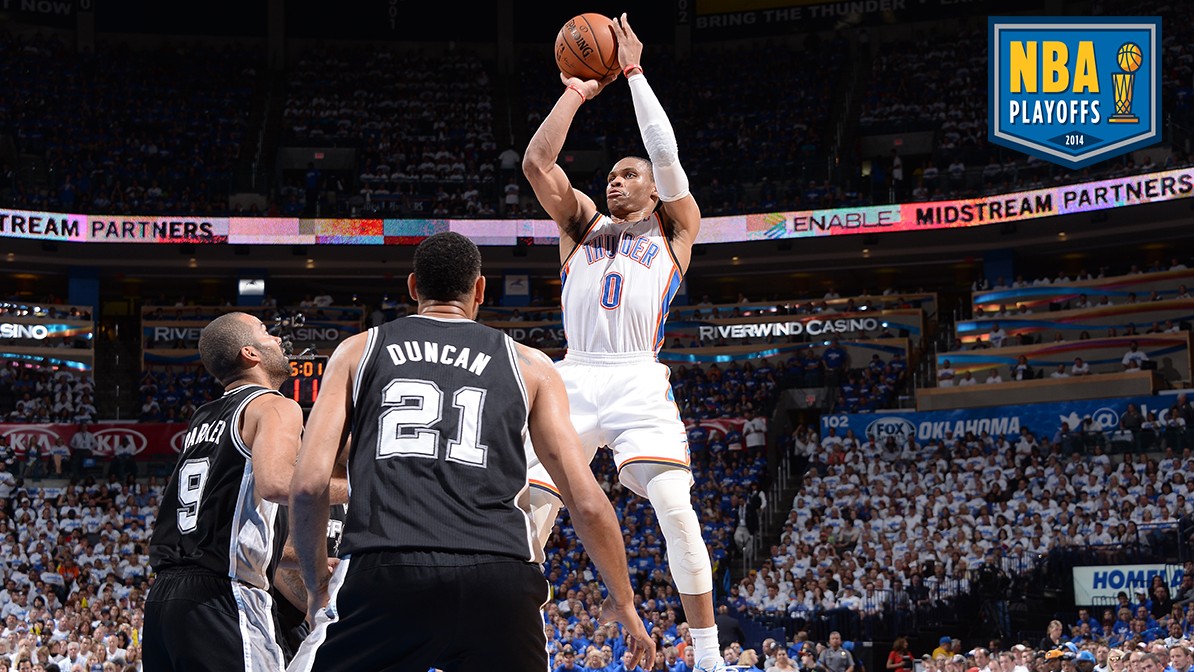 Everybody I know who loves basketball loves Russell Westbrook, but for many of us it’s complicated. We all loved him Tuesday night, but his career hasn’t been all Tuesday nights — the same things that make him so wonderful to watch can make him frustrating to root for.

The good news is that as he matures, so does his game, and the great things are showing up more often, while those maddening qualities seem to be diminishing. And to fully appreciate Westbrook these days, it’s helpful to know just how far he’s come since entering the league. So let’s take a look. 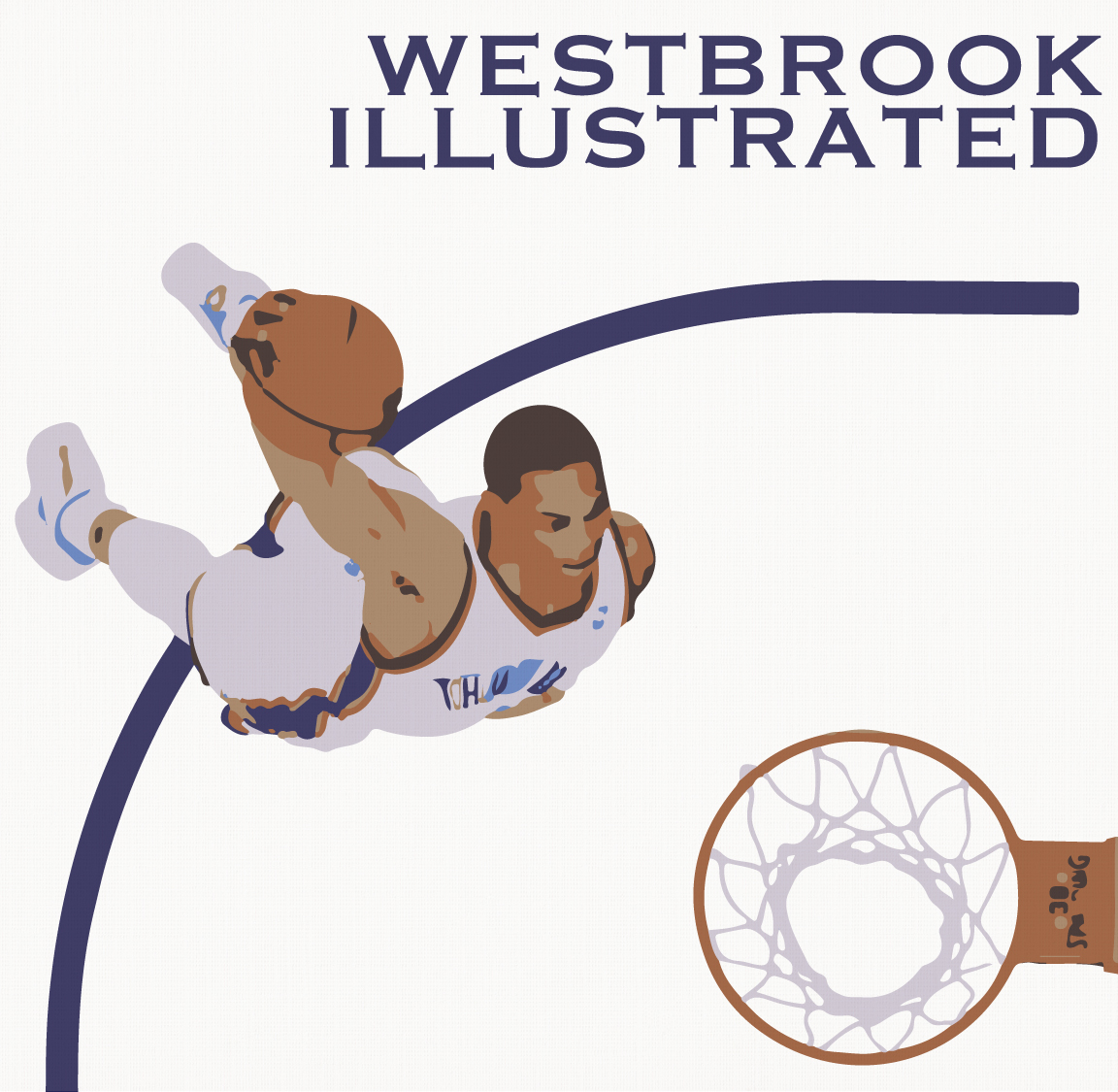 Let’s start with his big night during Game 4, which in many ways demonstrated that the dream of Westbrook can become real. He torched the Spurs, finishing with 40 points, 10 assists, five rebounds, and five steals. He made 12 of his 24 shots; how do you get 40 points on 12 made field goals? You get to the line a lot, something that few people in the world can do as well as he does. Tuesday, he was 14-of-14 from the line. 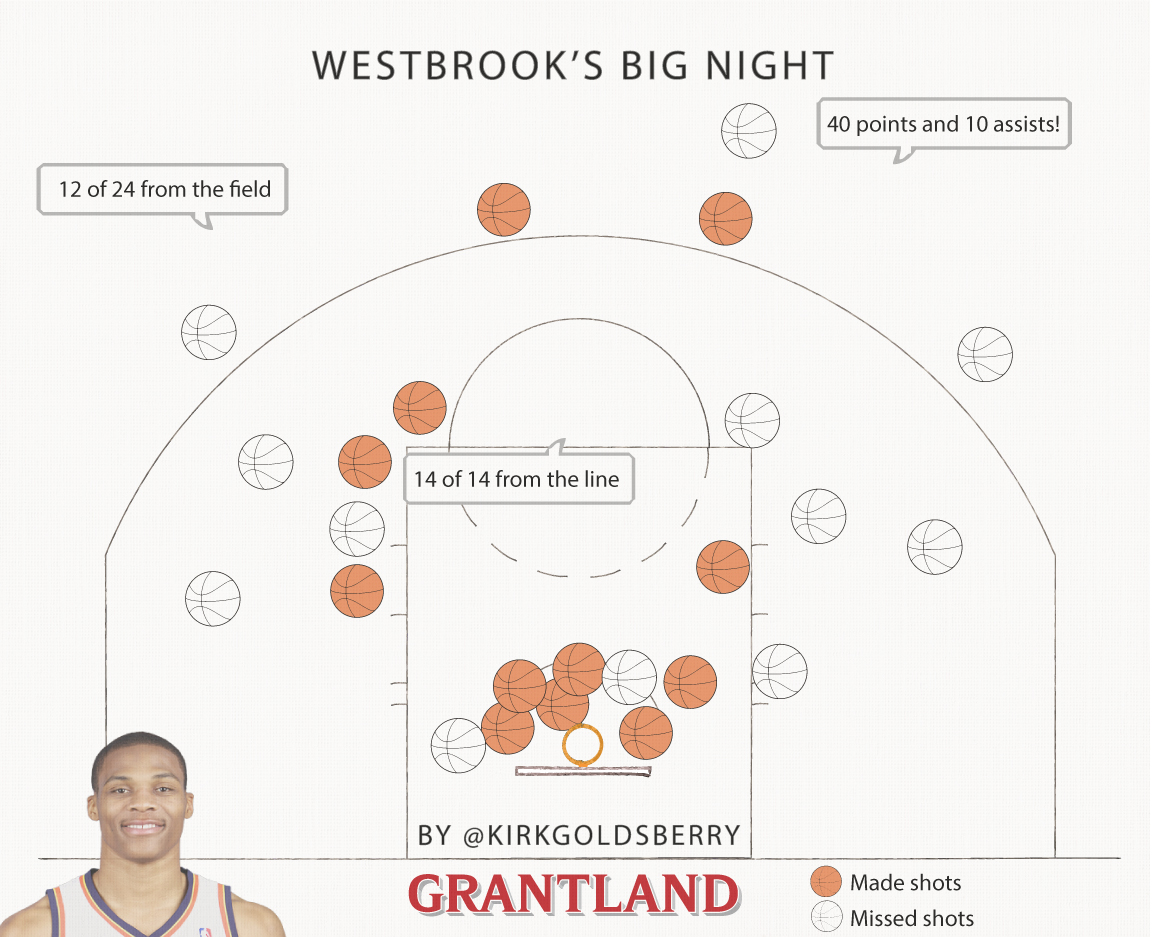 Since entering the league in 2008, Westbrook has always been a ferocious attack guard with a jump-shooting habit. He started 64 games in his rookie year and immediately became an impact player, scoring 15 points and dishing out five assists per game. But in a way, Westbrook’s fantastic Game 4 performance provides a glimpse into just how far he’s come as a player. Since entering the league in 2008, Westbrook has attempted more than 7,000 shots, from seemingly all over the floor. 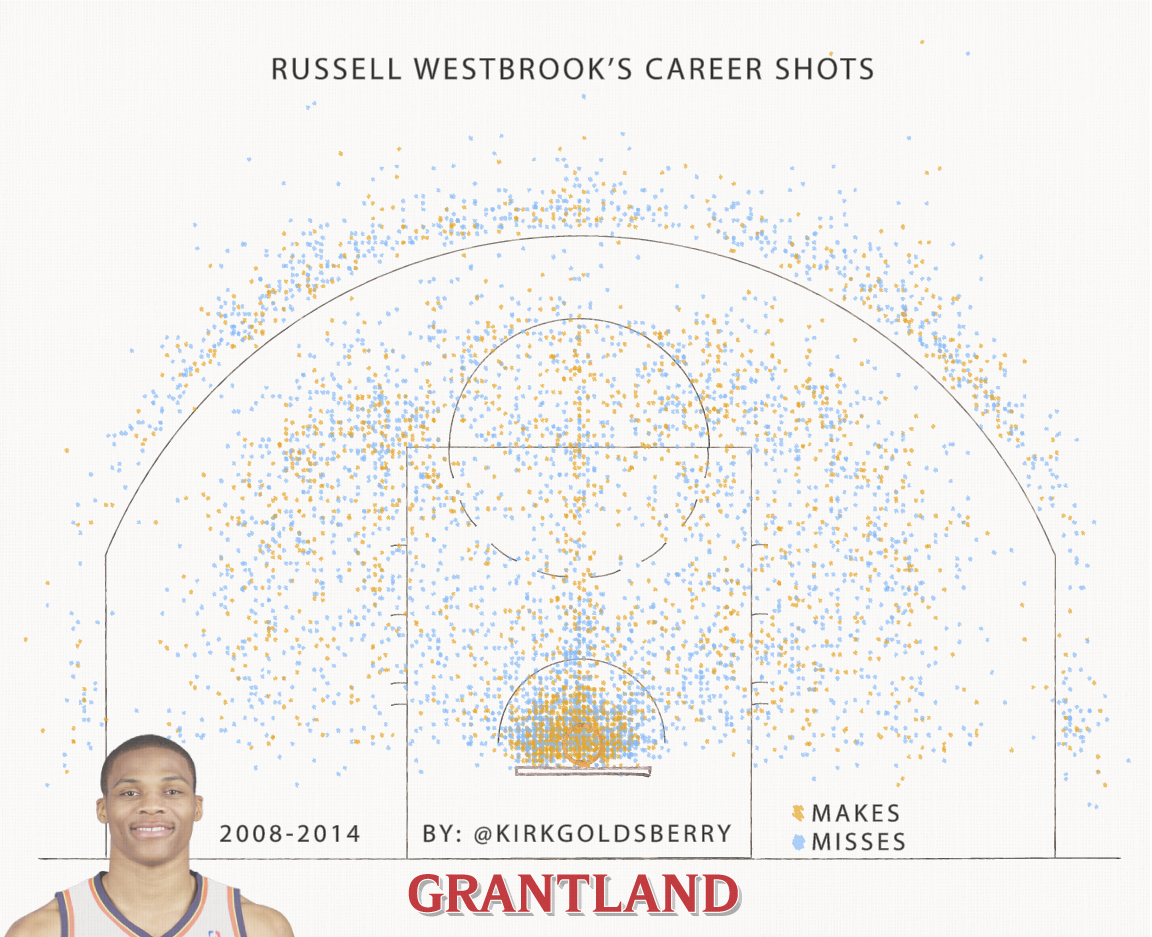 However, looking at it through another lens, one notices that he has settled on some favorite spots. Sure, Westbrook has shot from everywhere, but most of his field goal attempts come from three areas: near the rim, around the elbows, and above the break. 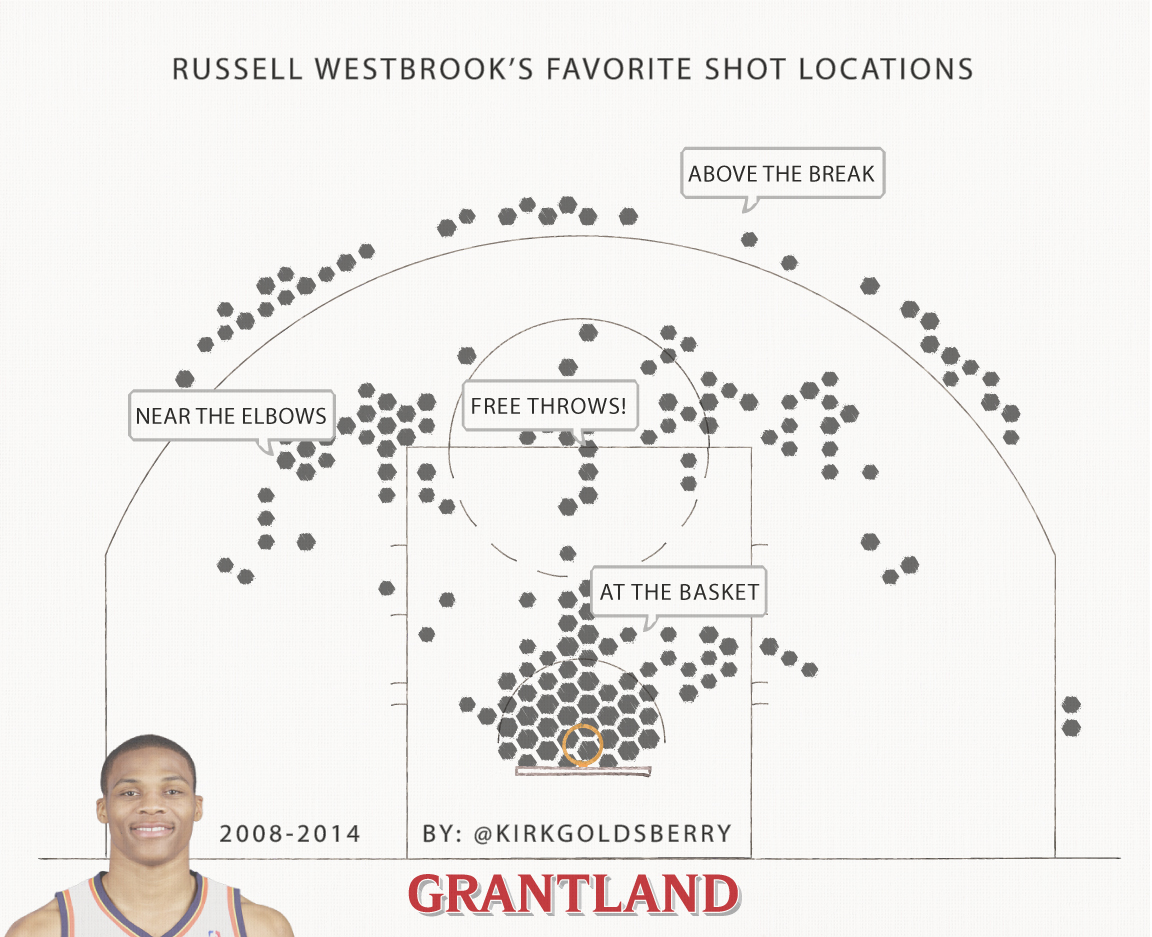 Westbrook’s game has leaned on a strong blend of rim attacks, jumpers, and free throws. In some ways, his scoring strategy has been stable; he’s almost always attempted about 40 percent of his field goals inside of 8 feet, and the remaining 60 percent have been jumpers. However, the distribution of those jump shots has shifted outward over time. In his early years, he loved pull-up midrange jumpers and shied away from 3-point shots. In his third season, only 7 percent of his shots came from beyond the arc.

However, in the last three seasons that behavior has changed, and those 3-point shots now account for 27 percent of his field goal attempts.

Westbrook’s game has changed; he’s exchanged many of those relatively inefficient midrange jumpers in favor of 3s. At the same time, he’s become a higher-percentage jump-shooter. As a result, he’s morphing into a more efficient scorer and, contrary to popular opinion, Westbrook has become an above-average midrange shooter, beating league averages despite creating most of his own midrange jumpers off the dribble. 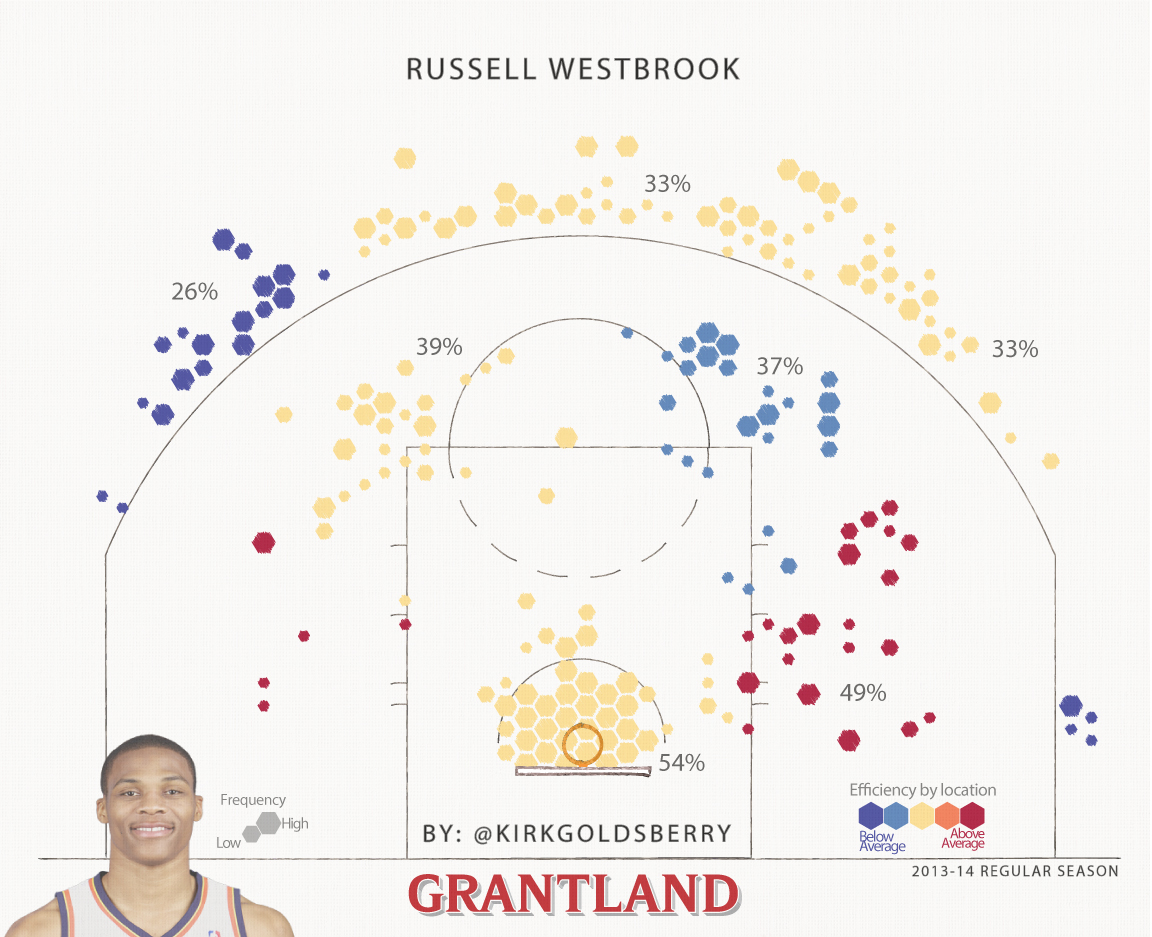 Unfortunately, as long as he plays on a title contender alongside one of the world’s best scorers, even those improved jumpers will continue to be frowned upon by those who insist each Westbrook shot introduces an opportunity cost to his team’s overall offensive portfolio. If Westbrook plays like he did in Game 4, the Spurs, and the rest of the NBA for that matter, have little chance. The combination of Westbrook at his best, Durant in almost any form, and a healthy Serge Ibaka is too much to bear for any opponent in the NBA.

Yet Westbrook’s essence necessarily involves that inconvenient stochastic truth; you can analyze him all you want, but you can never predict him. And while his best performances are truly magnificent basketball spectacles to behold, they’re not reliable, and anyone projecting the future of the Thunder based upon consistent performances akin to his Game 4 masterpiece is being either naive or wishful. Westbrook’s brilliance is always awesome, but never dependable; still, the future of the Western Conference certainly depends upon it.