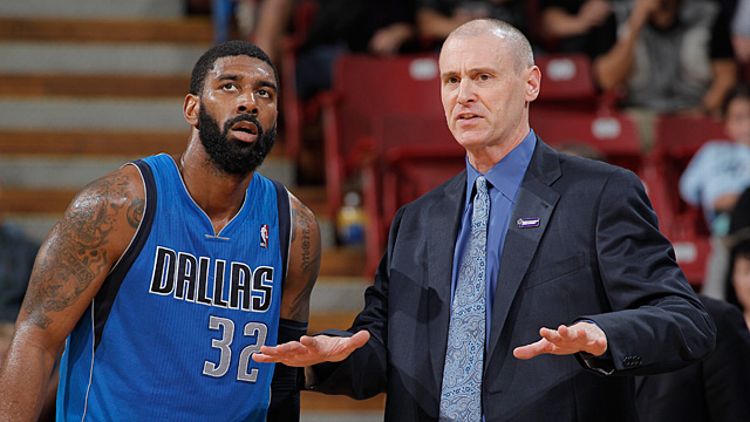 … who scored 35 points, with seven 3s in a Warriors victory over San Antonio. There was also …

… who did Russell Westbrook things against the Kings.

But ’tis the season to stop being nice about your teammates, your contract negotiations, your coach, the team’s front office, the city, the food, the travel, and whatever else is bothering you. We’re in the last week of school, and a bunch of guys have senioritis.

“I called that timeout just to get you out of the game!” This is apparently something Rick Carlisle yelled at O.J. Mayo during last night’s game between the Mavs and Grizzlies. The Mavs needed a win to have a shot at ending the season with a winning record. They lost. Mayo, who has been slumping through the second half of the season, averaging 11 points a game since the All-Star break, did not help very much. After the game, Carlisle said, “I just want to see him show up and compete. He didn’t compete tonight … And I tell you, with all the time we’ve put into helping him develop and bringing him along, in the biggest game of the year — an opportunity to be a winning team — for him to show up like he did tonight, I was shocked … Look, sometimes guys have bad nights, so make sure to put that in there, too.” OK, we’ll put it in there.

The Cavs lost to the Heat yesterday, making it 15 losses out of 17 for Cleveland. It’s been a pretty lousy second half of the season for Kyrie Irving, who entered and left the All-Star break as a newly minted NBA star. His team has sucked, he’s been injured, and upon his return, he immediately got drawn into a public debate about whether Byron Scott should be back as coach (Irving was, until today, noncommittal about Scott’s return). Whenever your franchise player has to put up tweets like these (in reference to Irving not participating in some postgame, season-ending fan appreciation after the Heat loss):

I want to personally apologize to all the Cavs fans for my actions yesterday, it was truly unfair to you guys, Im very appreciative for all

Of you guys, your love and passion for the organization and city is what pushes me to be great,

You, you got some issues.

How did your season go, buddy? “I did what I needed to do as a starter and handled my business … For some reason, they want to cut my legs from under me. I know I’m built for it. I did a great job of holding my composure and not letting it get to me to where I did something detrimental to my career. I showed a lot of character by sitting back while I was taken advantage of in a lot of ways. I’ve done everything asked of me in practice and made sure to show these people what time it is. It definitely hurts to sit on the bench, watching us lose night in and night out, knowing I can help and being lied to. It’s been a crazy year. I’m just glad I made it through.”

Is Wil Myers the Cure for the Anemic Rays Offense?