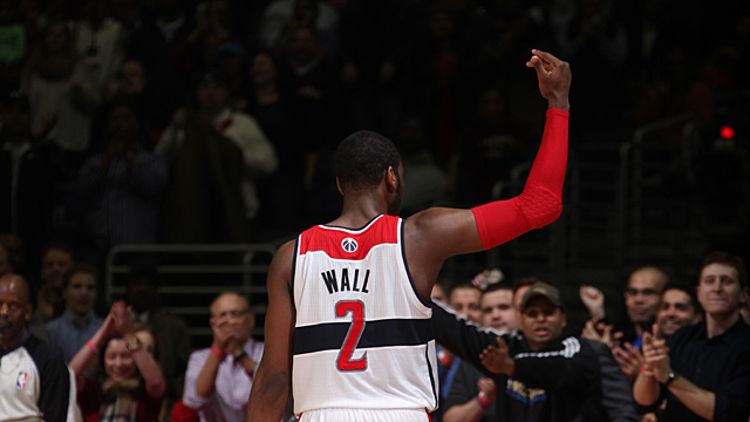 John Wall might be the best player in the NBA right now not named Kevin or LeBron. That should actually be an award: The M.V.P.N.N.K.L. Give that award to John Wall. Also, Ted Leonsis, fellow blogger, here’s a note: Pay John Wall. As someone who cheers for a team that just paid Jrue Holiday, that might pay a one-legged bowling enthusiast, that might pay Evan Turner, let me repeat: Pay John Wall. Check out Wall’s shot chart from last night: Do those midrange jumpers from the elbow give you pause? Well … he made ’em! This is a player who has galvanized your fan base; he is must-see TV. People will actively pay money to see him in person … does that change anything? Does the fact that his eFG percentage has jumped 14 points in March from the clip he was shooting at in January and February combined help at all? Does the fact that, according to Elias, only two other players have had 40-7-7 nights this season make you think differently? Would it matter that those two players are named Kobe and LeBron? Maybe? How about this revival sermon from Triangle amigo Joe House:

“This JimmyWa streak is the best thing that’s happened in DC pro-ball since the 2008 playoffs. It makes me so so so happy. Here’s what’s crazy: they are 21-16 since he came back from his bum knee, and have beat a slew of top-tier teams (including sweeping Denver). This is by far the best, most professional group he’s ever played with. Classic, classic, classic ‘small sample size,’ but this is exactly what Grunfeld had in mind for this season: surround Wall with pros and expect (hope for?) a third-year breakout, a la Russell Westbrook. Wall’s knee and Nene’s foot are what separates this team from middle of the pack Eastern Conference playoff squads. I spoke with Simmons earlier tonight … the only two teams they can’t beat in the whole league are Miami (duh) and San Antonio (Einstein-style).”

Coach Mark Jackson on GSW-LAL: “We are the better basketball team. They are in the rearview mirror. I have not checked it. And I will not.”

Without Greivis Vasquez or Eric Gordon, Brian Roberts filled in at point guard for the Hornets last night and dished out 18 assists, leading New Orleans to a home victory and ending Denver’s 15-game win streak. Pay Brian Roberts? Sure. Shout-out to Al-Farouq Aminu for the interior D, as well:

Seriously, who is Jeff Pendergraph? This is a real question. I saw that he had 12 points in the first half of the Pacers’ eventual win over the Hawks last night, and I was like, ” … ” Then I looked him up on YouTube. The best video I found was this clip before a Miami-Indy game: