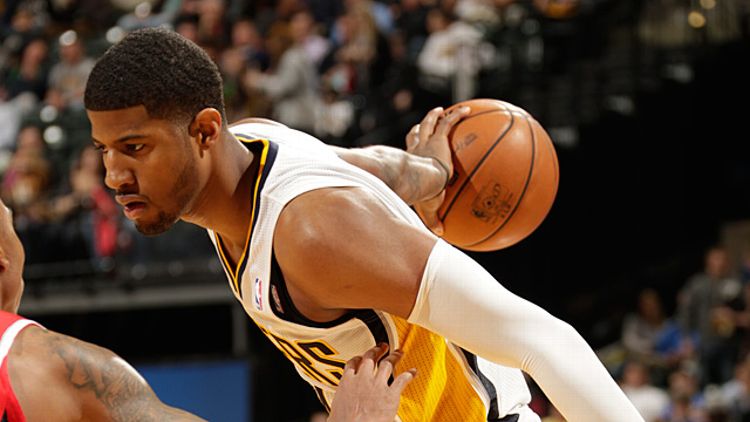 Danny Chau: Sure, it wasn’t a triple-double, but Paul George — with his 27 points on 11-for-21 shooting — was no slouch. After a dismal shooting performance in Game 1, George made a commitment to getting easy points around the basket, and he was unstoppable from 15 feet in. It was a night that inspired confidence in George’s already bright future. When he has games like these, when it all comes so effortlessly, it’s hard not to dream of a time when these outings from George become the norm.

Before tipoff, the Pacers held a little ceremony at center court to hand George his Most Improved Player award. Former MIP winner Danny Granger presented the trophy in street clothes. He managed a smile, but it was small and contained. I’m sure he was elated for George, but his expressions were muted, like he was preoccupied with the feeling of déjà vu. It’s been only four years since Granger won the award himself, when he was Indiana’s sole beacon of hope. The trophy changed hands and the symbolism was clear, though it’s been clear for some time. After years of carrying the mantle loosely as the de facto figurehead, Granger has handed it to someone who’s undeniably claiming it as his own.

2. When the Spurs Swag Out

3. How We Want to Remember Steve Nash

Chris Ryan: There was a point in the second half of last night’s Spurs-Lakers game when Steve Nash, who had been hobbling around the court for most of the evening with nerve damage in his back, a gimpy leg, and who knows what other maladies, went after a loose ball. No doubt still seeing the vapor trails from his multiple epidural shots, Nash went after the ball, as did the much more spry Cory Joseph. After a tussle for the ball, Joseph landed on Nash’s side. When Nash turned over, another Spurs player — Tony Parker, I think — landed on his other side. Nash got up, moving about as nimbly as you would expect a guy who needs an epidural shot to play basketball and just got caught in a Spurs sandwich to move. He made his way up the court, but he might have been shuffling off to The Best Exotic Marigold Hotel.

This feels like the last time we’re going to see Steve Nash play in an NBA playoff series. If that’s the case, I’m going to choose to remember him by his one moment of classic-Nash brilliance, rather than him dragging himself up the court in the wake of another Spurs fast break.

Brett Koremenos: As we headed toward the playoffs, I had to slightly prioritize which of the eight first-round battles were going to get the bulk of my attention. After all, you can’t fully analyze every detail of every game without slowly losing your sanity. Matchups destined to be quick, lopsided affairs, like Bucks-Heat, weren’t going to get the same level of scrutiny as all the rest because there’s only so much to say about one team smacking the other around the court for 48 minutes. Outside of the return of the prodigal son, Houston-OKC seemed to fall into that same category.

By inserting him into the starting lineup last night, Houston not only rediscovered the best version of themselves — four shooters surrounding Omer Asik — but they also unleashed their best point guard. Beverley is pretty much everything an even fully healthy Jeremy Lin isn’t. He’s a better defender, a better ball handler, a better, well … he’s just better. So it’s no coincidence that Game 2 was a much tighter affair when Lin spent the majority of the night watching Beverley put together a rather impressive stat line (16 points, 12 rebounds, six assists) in 41 Russell Westbrook–agitating minutes.

Even though the Rockets are down 0-2 as they return home, they’ve introduced a rather intriguing element into this series. The team still has virtually no shot at winning, mind you, but the injection of Beverley into a major role has taken the watchability of this matchup to a whole new level. And now it most certainly has my full attention.

5. Things That Happen When You Agitate Russell Westbrook

6. Robert Sacre Celebration of the Night