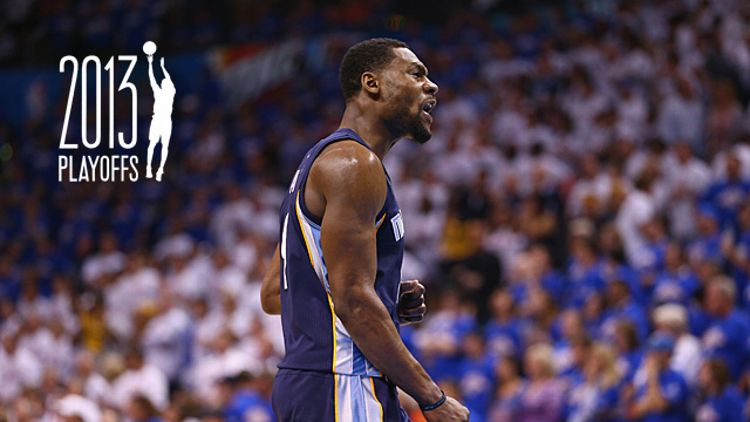 Chris Ryan: Aside from 8Ball & MJG, Big Star, and Three 6, these guys are now my favorite Memphis band. My favorite song by them is probably “We Don’t Care If We’re Home or On the Road,” but other favorites include “Is This a Playoff Beard or Did We All Collectively Run Out of Razors at the Same Time?,” “Tony Plays Like a Velociraptor (a.k.a. Clever Girl),” “Talk, Talk Zach,” “Mikey Ice,” “I Once Drafted Tony Wroten in a Keeper League” (whoops, that one’s actually my demo; not sure how this got here), “It’s a Trap (Where You Will Find Kevin Durant Because We’re Going to Make Reggie Jackson Beat Us Down the Stretch),” and that old chestnut, “If You’re Going to Play in the Post, You Should Wear a Catcher’s Mask (Marc’s Song).” Buy their album, This Should Take Us Six, on Unsmiling Lionel/Grindhouse Records, today.

netw3rk: This GIF right here is something of a microcosm of the Knicks’ postseason struggles between the ninth-circle demons of isolation and the somewhat less demonic, still iso-heavy but at least connected to the rest of the offense angels of ball movement. Pablo Prigioni practically begging J.R. Smith to give him the ball so Pablo can start the offense. Moments before, the Garden crowd chanted Pablo’s name in a weird mixture of straight-up praise for the Argentine’s WD-40-like effect on the Knicks’ offense and something approaching crowdsourcing. Mike Woodson, we like the way the team looks when Pablo plays; please play him more.

All postseason, up until Game 2 against Indiana, Carmelo Anthony had been locked in a vainglorious assault on the field goal attempts column, while shooting an awesome-for-a-baseball-player .318 percent. J.R. Smith has largely abandoned the aggressive drives to the rim that won him the Sixth Man of the Year award and is shooting a percentage that, if I wrote it here, might cause you to pee blood. Ray Felton has been excellent at getting into the lane, but lacks an eye for the pass and mostly looks for his own offense, averaging just under five assists, with an assist rate of 23 percent in the playoffs. The Knicks are the worst assisting team, by average and ratio, in the playoffs. Balls be gettin’ hogged.

Enter Pablo. In these playoffs, according to NBA.com, in 155 postseason minutes with Pablo on the court, the Knicks’ assist ratio goes north from 11.3 to 16.6; their OffRtg goes from 94.2 to 109.4; they give up about 13 fewer points per 100 possessions; and their True Shooting percentage goes from 47.9 percent to 55.5 percent. Translation: The Knicks pass, shoot, and defend better when Prigioni’s on the court. His postseason plus/minus of plus-9.4 leads the team; he’s a borderline savant on defending the inbounds; and his speaking voice is reminiscent of an Andy Kaufman character. In short: Play him, Woodson.

Danny Chau: Let’s say you’re Christina Aguilera. Let’s say all you want out of the playoffs is to feel the moment. There is no past and no future, only the possession at hand and all its game-defining potential. Let’s say this moment features an aging and ineffective veteran who’s suddenly and inexplicably unstoppable from the field. Let’s say it’s Derek Fisher, who, for a night, has converted all of his intangible veteran leadership into red hot, very tangible fire. Now, let’s stop with the hypotheticals because this actually happened last night. And I’m starting to think only Christina Aguilera could fully appreciate the glory of Derek Fisher: OKC’s Second-Leading Scorer.

I think I speak for most when I say I’m not Christina Aguilera. My Fisher viewing experience was a confluence of joy, bewilderment, and frustration. I enjoy the flashes of random in basketball as much as anybody, and I have no problems with cheering for a player defying the odds, but Fisher’s performance can’t be isolated from context. His 19-point outburst is a symptom of a troubling issue: If there’s a revolving door for OKC’s second options (and if Fisher has already become one of them), how soon do the options run out?

This is the Thunder’s first full playoff series without Russell Westbrook. The whole world is waiting to see what Kevin Durant looks like with the team on his shoulders, and so far he’s lived up to our expectations. But just ask a 24-year-old LeBron James how hard it is to keep excellence alive in the playoffs when you don’t know where your help is coming from on a nightly basis. It’s not going to get any easier for OKC’s supporting cast now that the series is shifting to Memphis. It’s been a close series, but it’s not too far-fetched to think Durant might see some slippage at some point in the next few games. Then what? Whatever happens, let’s hope it doesn’t come down to Derek Fisher as the last resort. After watching him drain a baseline fadeaway over Marc Gasol last night, I’m almost positive he’s all out of miracles for the year.

Brett Koremenos: While an exciting contest overall, last night’s Game 2 matchup between the Grizz and Thunder was not a shining moment for the head coaches. Both Scott Brooks and Lionel Hollins made several head-scratching decisions, but three of them really stood out for the lack of logic behind them.

1. The Keyon-Dooling-for-Marc-Gasol swap at the end of the third quarter
Hollins inexplicably chose to sub Dooling in for Gasol — who wasn’t in foul trouble and unlikely to gain a huge benefit from an extra half-minute of rest. It was hard to understand the reasoning behind it when it happened, but it looked even worse when Durant barreled down an unprotected lane en route to a 3-point play.

Though we typically only remember the crucial possessions that needlessly cost a team points when they occur at the very end of the game, it’s plays like this that go a long way in determining the outcome, especially in a very tight game. If it weren’t for Mike Conley’s brilliant final quarter, the three points given away at the end of the third by this confounding substitution could’ve came back to haunt Memphis.

2. The Iso-Prince offense
Hollins traditionally does a lot of the play calling for the Grizzlies, so there’s a good chance he may have been directly involved in the baffling decision to call post-ups and isolations for Tayshaun Prince during the fourth quarter. With Conley playing so well and the Gasol-Randolph duo punishing the Thunder inside, it made little or no sense to feed the struggling forward the ball that late in the game.

3. The play call for Perk
Kendrick Perkins catches quite a bit of heat for his many flaws, but it’s often unfair that he’s the one receiving criticism for it. The Thunder’s penultimate possession was a prime example of why Brooks, not Perkins, is largely responsible for the center being a detriment to his team at times.

Down five and badly needing a bucket, Brooks drew up a play that had Perkins not just handling the basketball, but being forced to pass, and make a decision on the move. It was a microcosm of the entire Brooks-Perkins relationship — the head coach putting his big man in a spot that more often than not leads to failure.

Perhaps the most stunning part wasn’t even what Perkins was asked to do on that particular play, but that he was even in the game. Brooks pulled out a superior offensive player, Reggie Jackson, just to get his limited big man on the floor. A head-scratching decision all around.