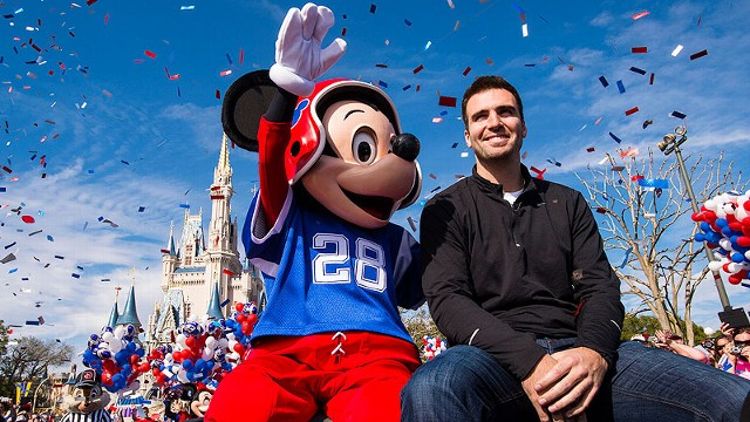 Every now and then, our boss, Bill Simmons, will forward some of his reader mail to me and fellow Triangle editor Chris Ryan. Most of the time, it’s to troll us about our favorite teams (Brian Urlacher’s pre-draft ascension was entirely legitimate, and I won’t hear otherwise), but occasionally, one of the notes has an idea so insane that it actually makes a lot of sense.

Following the NFL draft, Jonathan from Suitland, Maryland, sent an explanation of why it often sucks to root for the Eagles around draft time. His reasoning for this was a series of draft trades made during the 2009 and 2010 seasons. It started with a trade in April 2009, when the Bears traded Kyle Orton, the 18th pick in 2009, a third-rounder in 2009, and their first-round pick in 2010 to the Broncos in exchange for Jay Cutler and Denver’s 2009 fifth-round pick. Now, watch carefully. This gets confusing fast.

That 2009 third-rounder Denver got was eventually traded to Pittsburgh, which used it to draft Mike Wallace. A year later, Denver traded the no. 11 pick it got from Chicago to San Francisco for the 13th overall pick and the Niners’ fourth-rounder. At 11, San Francisco took Pro Bowl tackle Anthony Davis. The Broncos traded the 13th pick to Philadelphia for the 24th pick and two third-round picks. With that 13th pick, the Eagles took Brandon Graham (more on that in a bit). One of Denver’s new third-round picks turned into Eric Decker.

What Jonathan took away from all this was that somehow, every team involved here managed to come away with a star except the Eagles. What I took away from it was, “Holy shit, how often does this happen?” “This” being a crazy amount of sideways realities that could’ve resulted from the trades of any given draft. Aaron Hernandez could be a 49er. Or a Bronco. The Patriots could’ve had either Dez Bryant or Demaryius Thomas. Eric Decker could’ve been an Eagle.

Now, I know that potentially any team could’ve had Aaron Hernandez, considering each passed on him several times. But that ruins the fun. For our purposes, these alternate realities involve a player going to a team that at one point held the pick with which he was taken. Of course need, fit, and other terms of the like would’ve come into play, but again — fun.

We’ll call this one Ditka’s Curse. Everyone remembers that ESPN The Magazine cover, but what they don’t remember is that along with torpedoing his new franchise, Da Coach did plenty of damage to his old one with the Ricky Williams trade. To move up to no. 5 in 1999, New Orleans sent the 12th pick, picks in the third, fourth, fifth, sixth, and seventh rounds that same year, and their 2000 first- and third-round picks to Washington. The Redskins then traded their extra third-, fourth-, and fifth-round picks, a third-round pick in 2001, and the 12th pick to Chicago for no. 7.

Washington used that no. 7 pick to take Champ Bailey, whose Hall of Fame bust someone’s already made because they were bored and had time on their hands. The Bears used the 12th pick to take Cade McNown — something I’d managed to almost entirely forget until now. It would help if any of those middle-round picks turned into something. They didn’t, so it doesn’t.

2004: Steven Jackson goes 24th to the Broncos or Bengals

Imagining the possibilities from the 24th pick in 2004 staying with either of its first two owners is made difficult when we consider reality. Clinton Portis had just finished his second straight 1,500-yard season in Denver (both of which saw him average 5.5 yards per carry), so the Broncos were pretty set in the backfield. The 17th pick Denver got from the Bengals (in exchange for 24, Deltha O’Neal, and a fourth-rounder) ended up being D.J. Williams, who had a very good, if unspectacular, run for the Broncos. The situation that’s easier to envision is what would’ve happened if Jackson had wound up in Cincinnati.

The Bengals already had Rudi Johnson, but I think it’s fair to say Jackson’s professional ceiling sat a little higher than Rudi’s. In 2005, the Bengals were fourth in the NFL in scoring on their way to an 11-5 finish. Obviously, the biggest what-if of that season still has to deal with Carson Palmer’s knee, but picturing that Bengals offense with Steven Jackson — yikes. Also, going to Cincinnati would’ve saved Jackson from wasting a huge chunk of his career in St. Louis. As a species, I’m pretty sure that’s something we universally favor.

I can’t figure out whether I’m seeking out the trades that should make Bears fans miserable, or just that there are just more of them. In any case, here’s another.

As is the case with a lot of defensive backs, the widely held opinion of Eric Weddle hasn’t quite caught up with his production. This isn’t anyone’s fault. It’s hard to judge a player when he spends the majority of games off-camera. According to Pro Football Focus, Weddle was the 15th-highest graded player in the NFL last season — one spot ahead of Joe Staley and two spots ahead of Matt Ryan. The A.J. Smith era in San Diego didn’t bring about many draft-day gems, but Weddle is definitely a prize.

San Diego came into the pick thanks to two trades. The first is one that was criticized in Chicago at the time but in hindsight is actually the less problematic of the two. Following the 2006 season, in which the Bears went to the Super Bowl, Chicago traded starter Thomas Jones to the Jets in order to move up 26 spots in the second round. Two years earlier, the Bears had spent a top-five pick on Cedric Benson, and it had apparently become time to give him the workload associated with his draft position. It’s what the Bears ended up doing with that pick that’s more frustrating.

Chicago eventually traded the 37th pick to San Diego in exchange for the 62nd pick, a third-round pick, a fifth-round pick, and a third-round pick the next year. That’s a pretty decent haul. It’s also a haul that turned into Dan Bazuin, Garrett Wolfe, Kevin Payne, and Marcus Harrison. None of those players is still employed by an NFL team. Eric Weddle might be the best safety in football.

The Jared Allen trade in 2008 was a great one for Minnesota, but it also left some pretty intriguing possibilities. For Allen and a sixth-round pick, Minnesota sent the Chiefs a first-round pick, two third-round picks, and a sixth-rounder. Eventually, another trade led to Branden Albert landing in Kansas City and Gosder Cherilus winding up in Detroit, but that’s not the interesting part.

The sixth-round throwaway pick Kansas City included with Allen turned out to be Notre Dame center John Sullivan. Five years later, it’s Sullivan, and not Allen, who’s the league’s best player at his position. On the other side, one of the third-round picks sent to Kansas City was used to take Jamaal Charles. Theoretically, Minnesota’s stable of skill-position players could’ve included Adrian Peterson, Percy Harvin, and Charles. Luckily, none of that would’ve mattered if the alternate reality also included Christian Ponder.

Not enough Ravens fans were thanking the Jacksonville Jaguars for this year’s Super Bowl win. In 2008, Baltimore, fresh off a 5-11 finish, was the owner of the no. 8 pick in the draft. Jacksonville, which has been in need of a pass rusher since the franchise’s inception, packaged the 26th pick, two third-round picks, and a fourth-round pick to Baltimore for the right to move up and take Florida defensive end Derrick Harvey. Harvey was cut by the Bengals last August.

Baltimore packaged one of those third-round picks, a sixth-round pick, and the 26th pick and sent them to Houston for the 18th pick. That 18th pick was Joe Flacco, he of the Super Bowl MVP and $120 million contract. In what seems like a rarity in pro sports trades, the deal ended up being a good one for both sides, though. With the 26th pick, Houston took Virginia Tech offensive tackle Duane Brown. At the time, Brown was considered a project. Seven offensive tackles were taken before him in that year’s first round, and although a couple of them still remain among the league’s best (Ryan Clady, possibly Jake Long), Brown turned into the best of them. He’s 13th on that Pro Football Focus list of the best players in the NFL, three spots ahead of the second-best tackle (Joe Staley).

2010: Rob Gronkowski goes to the Bucs or Raiders

I’m also hesitant to lay this out because I’m worried what even the thought of a Gronk-less life would do to Patriots fans. Gronkowski eventually slipped to the second round because of concerns about his injured back, but it took more than him falling down draft boards to get to New England.

Tampa Bay owned the 42nd pick following a trade with Chicago, but the Bucs eventually shipped it, along with a fifth-round pick, to Oakland to move up three spots and take Illinois wide receiver Arrelious Benn. Benn was considered a big-time talent from the time he played in high school with Vontae Davis, but he never panned out in Tampa Bay and was traded to Philadelphia this offseason for some late-round fodder.

The next trade is particularly unfortunate when you consider that Gronkowski would’ve likely been the most popular player in the history of the Black Hole, but alas, Oakland dealt no. 42 to New England in order to move down two spots and pick up an extra sixth-round pick. The Raiders eventually got solid defensive lineman Lamarr Houston out of the deal, but solid defensive linemen don’t mean much next to the best tight end in the league.