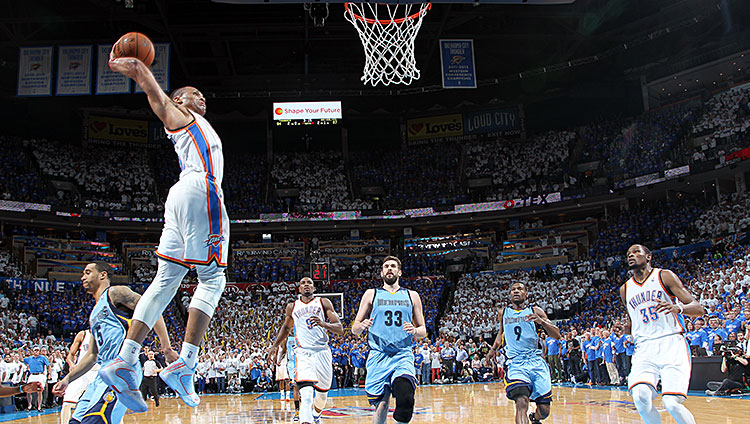 Chaos enveloped the entire possession. On each replay, there’s another potential disaster to point out. Maybe Tony Allen gets there more quickly, and his gamble pays off. Maybe Russell Westbrook rushes to the loose ball and throws it out of bounds. Maybe Kevin Durant isn’t able to reach so far behind his hip and the ball falls out of bounds. Maybe Durant falls out of bounds. Maybe Marc Gasol’s hands, which instinctively fly up as Durant launches the shot, actually catches the ball as it rises. That wouldn’t be a surprise; Durant is falling away at an impossible angle, and another player, one who isn’t the King of Limbs, surely would’ve either overshot the hoop or gotten blocked. So much could have gone wrong; so much did go wrong.

Watch it again. Watch Durant’s upper body after he reaches across himself to catch Westbrook’s pass. Watch as he finds balance in the most precarious position. Watch as he’s able to, for a split second, line up his body. It’s beautiful, and you can almost feel the hours and hours of strength and conditioning he’s put in to achieve the core strength to do that. You can almost feel the hours he’s spent studying Dirk Nowitzki’s ability to maintain equilibrium, even when the absurdity of his positioning seems to throw everything out of whack. “It’s a lot more than just trying to copy the one-legger,” Durant told ESPN’s Marc Stein a few weeks ago. He wasn’t just copying a move, he was trying to reach a higher state of readiness.

Our KD, who art falling down
Splashing is thy game
Thy finger guns
Thy foes be sonned
Shots fall as they do with Kevin
Give us this day a shot so cray
And forgive Perk his trespasses
As he made the basket for an extra five minutes
To end it not in regulation
But delivered us to OT, Amen

How Can I Not?

Tony Allen sat down at the podium for his postgame press conference, and the first thing that came out of his mouth was, “It ain’t about me. It’s about the Grizzlies.” The man is simply the physical embodiment of what the playoffs are all about. Yes, Durant scored 36 on his watch. But guess who slept like a baby last night, and guess who might be having recurring visions of a certain menace’s ball denial in his dreams?

When a reporter asked about the Grizzlies’ offense, Allen couldn’t conceal his snickers. “I don’t know much about the offense …” He trailed off, and got a couple of laughs. It was self-aware and a little self-deprecating when he maybe didn’t need to be, considering he made the most important offensive play of the game for the Grizzlies. With 26 seconds left in overtime, Allen caught the ball on a sharp cut to the middle of the lane, and immediately flipped it over to Zach Randolph (25 points on 50 percent shooting) for an easy basket that put the Grizzlies up for good.

Hell of a game, Tony. Hope your day is full of rest and the new Future album.

Before Kendrick Perkins Was the Savior, He Ruined Everything

I see you Beno!