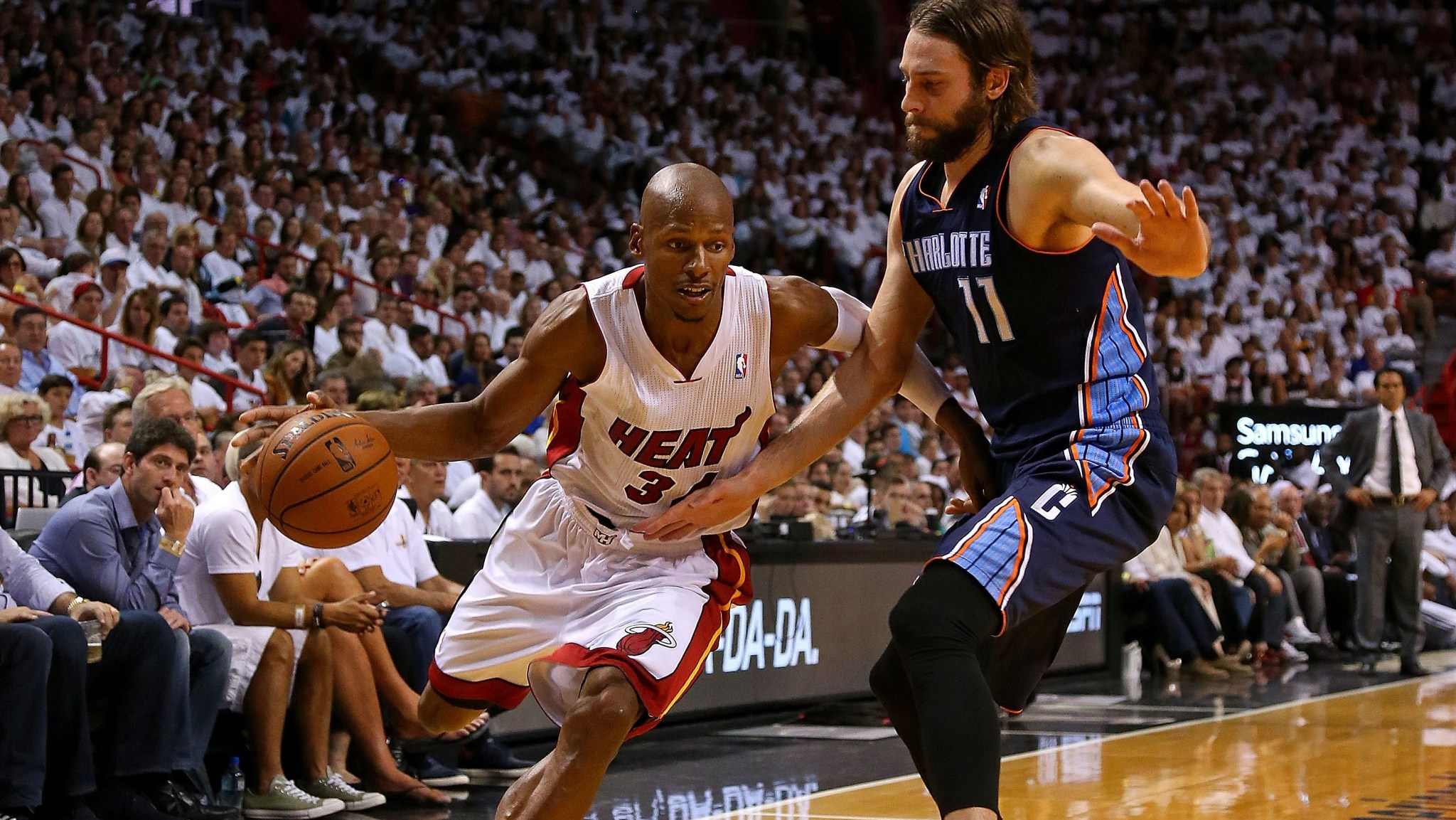 The NBA has never really gotten the first round of its playoff structure right. Those series were in a best-of-three format as recently as 1983, and then the NBA expanded the first round to a best-of-five approach the following year and kept that in place until 2003, when the league moved to best-of-seven for all playoff series. The reason is pretty obvious: More playoff games mean more revenue. Ask NBA fans and you’ll still hear a fair number wish for the best-of-five format; shorter series lend themselves to a greater likelihood of upsets and more competitive, intense games. For every exciting first-round series that requires the full seven games, there seems to be one where the extra game is a waste of time. The seven-game series between the Bulls and Nets last season was worth the effort, but did we really need to see the Heat beat the Bucks four straight times to know Miami was the team that should move on?

Well, what if there were a way to get the best of both worlds? Make the seven-game series available for competitive first-round series, but retain the five-game series for those that aren’t especially close? I think there might very well be a way to make the first round of the NBA playoffs better for everyone involved.

Keep the first round of the playoffs as a best-of-seven series unless one team wins the first three games of the series. If a team goes up 3-0, the series is treated as a best-of-five and ends.

• We’re eliminating mostly meaningless playoff games. Whether they’re demoralized or overmatched, no NBA team has ever come back from a 3-0 series deficit to win its series. They’re a combined 0-108. Across the major professional American sports, teams that have gone up 3-0 in a series have won 312 of 316 times, a 98.7 percent win rate. Once somebody goes up 3-0, the series is basically a done deal, even if doesn’t necessarily end in a sweep. At the 98.7 percent rate, we’ll see only about one comeback from 3-0 down in the NBA every 28 years.

• We’re giving teams a tangible reward for dominating. The three-game sweep offers an opportunity for truly excellent teams to get extra rest in the playoffs, which can be a real advantage. Research at Basketball Prospectus by Kevin Pelton (who is now with ESPN) found that every game a team didn’t have to play in a previous round was worth about 0.2 wins in a subsequent round. Ending a series at 3-0 — as opposed to 4-0, let alone 4-1, 4-2, or 4-3 — gives a team extra time to rest, scout, and prepare from the comforts of home for its next opponent.

• It turns Game 3 in a 2-0 series into a wildly exciting, strategically compelling affair. In the NBA, teams that are up 2-0 win Game 3 just 42.4 percent of the time, likely owing to many of those series coming when one team goes up 2-0 at home before playing Game 3 on the road against a desperate opponent. If a series starts 2-0 now, the desperation comes only from the team down 0-2. With the three-game sweep available, though, now both teams will be desperate to win that third game. It’s an interesting quandary: If you’re up 2-0, do you stretch your star players in Game 3 to try to win the series right then, knowing you can give them extra rest with a win? Or do you treat it like just another contest and assume you’ll still need your stars for another game or two? I know that I’m pitching this exclusively for Round 1 of the playoffs, but imagine Gregg Popovich handling that possibility when his Spurs were up 2-0 on the Thunder in the Western Conference finals in 2012.

And obviously, if you’re down 0-2, Game 3 becomes an elimination, backs-to-the-wall contest. If anything, a season-saving win might be just the tonic your team needs to propel itself back into the swing of things, and since your team is down 2-1 instead of 3-1, it’s easier to tie a series at that point.

• It’s easier to win a series in an upset. An underdog isn’t likely to sweep a superior team, but it’s certainly easier for that dog to do it in three games than it is in four. If we know that Team A has a 40 percent chance of beating Team B on any given day, Team A’s chances of a sweep — before a series begins — rise from 2.6 percent to 6.4 percent. The favorite’s chances of a sweep rise, too, but in all, with the three-game sweep available, that underdog’s chances of winning a series improves by about 0.35 percent.

• It might be too easy for a home team to go up 2-0. NBA series are all currently played in a 2-2-1-1-1 format, with the higher seed hosting the first two games of the series. That normally isn’t a problem, since in a best-of-seven series, each team gets a minimum of two home games before the series presumably ends. With the three-game sweep possibility, though, it’s easy to imagine a higher seed holding serve at home before forcing the opposing team into a must-win Game 3 during the latter’s first home game of the series. When the home team wins Game 1 of a series, it wins the second game 67.9 percent of the time (and 2-0 teams win Game 3 on the road 40.4 percent of the time). That might create too many three-game sweeps.

The obvious way to work on that is to eliminate the two-game playoff homestand and turn the playoffs into a series of alternating home and away games. That creates more travel, but there are no back-to-backs in the playoffs anyway, so the travel should be manageable. If the travel concerns are really so pressing that teams want to have two consecutive games at home, 1-1-2-2-1 could also be on the table.

To be honest, though, I think the 2-2-1-1-1 format would work fine with the three-game sweep. Wouldn’t it be fun to see a dominant team like the Spurs go up 2-0 at home and then have to travel to Dallas for a possible series-ending Game 3, knowing the Mavericks are going to do everything they can to keep the series alive in front of their home crowd? And won’t the pressure be higher for the lesser team to avoid a sweep in the first two games? The league would adapt to the new rule.

• Teams could get rusty with the longer breaks afforded them by the 3-0 sweep. If you believe in rust mattering, that is. I took a look at the idea that NBA teams suffer after long postseason layoffs two years ago and found there was no evidence of teams actually getting rusty. You know how it is: If a team has a long stretch off and loses its next game, it was rusty. If it has that same long break and wins its first game, it was well rested. It’s ex post facto nonsense.

• Miraculous comebacks from 3-0 down are fun. As a Red Sox fan, the memory of a 3-0 comeback happens to be near and dear to my heart. Had the Yankees been able to win by sweeping the third game of that 2004 ALCS, an incredible season would have ended with the Yankees winning by about 60 runs in Boston during a horrific Game 3. This rule would prevent a comeback like that from ever occurring.

That’s certainly true, but this rule will create other sorts of opportunities for miracles. We won’t get the once-every–28 years comeback from 3-0 down, but we’re more likely to get the sudden run where an underdog pulls off the three-game sweep of a higher seed.

• There will be a loss of league revenue from those missing playoff games. Unquestionably the biggest reason this change will almost surely never happen: Professional sports leagues like money. By possibly eliminating one or more playoff games in a series, the league will be forgoing television revenue for those contests, while the losing team will lose the arena revenue from a now-abandoned Game 4.

On the other hand, it’s also likely the NBA would put out a better playoff product with this rule. The first round is already oversaturated, given that there are actually midweek playoff games that air nationally on NBA TV. The disappearing games would often come from uncompetitive series where there’s going to be an obvious winner and attention has already been focused elsewhere. And when the players from likely Round 1 sweepers like the Heat come back onto the court, they’d be fresher and play better than they would had they suited up for four or five games in the opening round.

The financial concerns would probably dictate that you wouldn’t do this for every series; you wouldn’t want the Finals, for example, to end after three games. And I’m not sure it would work in the other sports with seven-game series, because some quirk of scheduling and/or a rainout could very well end up with a team facing an opponent’s lone ace pitcher twice in three games. (Then again, the division series is a best-of-five already …) I’m pretty confident, though, that if you took this slight rule change and applied it solely to the first round of the NBA playoffs, it would take something that’s already great and make it greater.