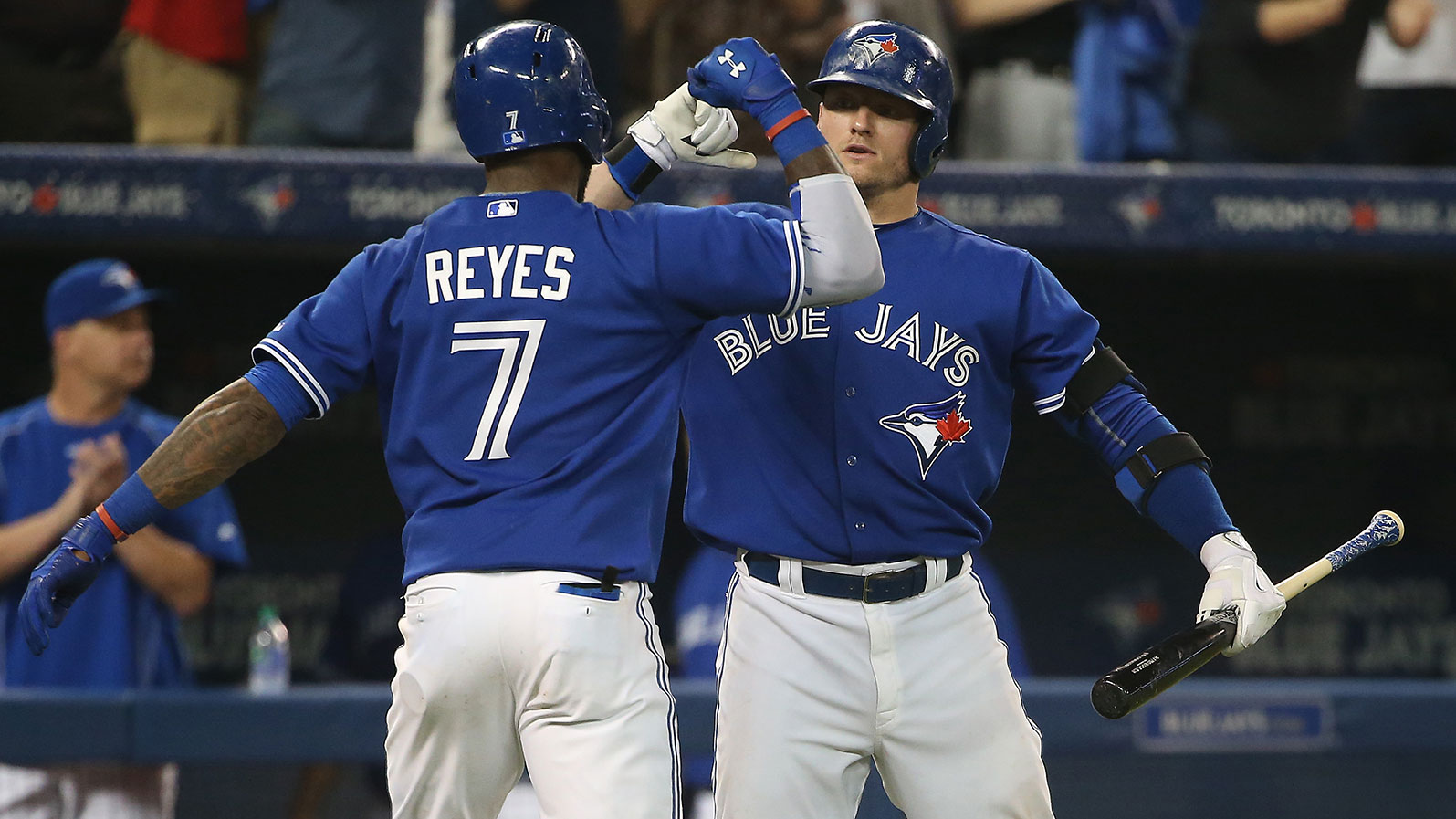 If you’re a fan of slugging baseball, the Blue Jays’ weekend sweep over the Red Sox was a joy to behold. Toronto tallied 31 runs in three games, bookending Saturday’s 11-inning squeaker with a pair of 13-run onslaughts. The series against Boston extended the Jays’ winning streak to 11 games, the longest in baseball this season and tied for the longest in franchise history. In those 11 games, Toronto scored a gobsmacking 88 runs.

While the Jays have cooled off since — they’ve lost their last two, scoring just five runs combined — the winning streak not only thrust them back into the thick of the AL East race, it put Toronto on pace to finish as one of the best offensive teams we’ve ever seen.

Just look at these numbers:

• They have one of the top 20 park-adjusted offenses since World War II.

Yet despite all of that mashing and bashing, the Jays sit just two games over .500, tied for third place in the AL East, two games back of the front-running Rays. For that they can thank a terrible pitching staff, consisting of a phalanx of mediocre veterans and a bunch of kids who’ve been occasionally good and often terrible. Add it all up and you have a team attempting to make history by riding a monster offense and Swiss-cheese pitching into the playoffs.

Through 66 games, the Jays have allowed 4.4 runs per game — the third-worst mark in the American League, behind Boston and Chicago. Whether or not you’re a devout follower of the “pitching wins championships” theory, being worse than everyone in the league except two last-place teams wouldn’t seem like a formula for October success — or even October participation.

Guess how many teams finished among the three worst run-prevention clubs in their league and still made the postseason? Just five, and two played during the PED era, while another played more than 100 years ago.1

Were it not for a much-improved defense, the run-prevention numbers would look even worse. According to Defensive Runs Saved, Toronto’s defense has been 28 runs better than league average this year.2 That’s a huge upgrade compared to last year’s D, which cost the team 22 more runs than the average AL club.

Three of the Jays’ worst defensive positions in 2014 were catcher, third base, and center field, and each has been significantly upgraded. Two of those upgrades were by design: After making them the centerpiece of their offseason overhaul, the Jays expected Russell Martin and Josh Donaldson to be strong glovemen as well as potent hitters, and both have come through. Donaldson, in particular, has been the AL’s best defensive third baseman per DRS. The other upgrade came by accident, as Kevin Pillar was thrust into everyday duty in center field following a rash of injuries. He’s been a huge improvement over Colby Rasmus’s 2014 performance and has become a fixture on highlight reels.

Take away the Jays’ strong D, and it gets real ugly. By park-adjusted Fielding Independent Pitching, Toronto is worst in the American League, ahead of only the Phillies and the surprisingly leaky Braves among all MLB teams. More specifically, the starters have been worse than anyone on a park-adjusted basis, in addition to a 4.64 ERA and 4.70 FIP.

One of the worst offenders has been R.A. Dickey. Credit the 40-year-old knuckleballer for eating copious innings since becoming a Blue Jay in 2013; only four pitchers have topped Dickey’s 522 innings pitched during that stretch. But after two seasons of respectable if unspectacular numbers, Dickey’s become an arsonist this year, posting a 5.29 ERA and 5.30 FIP while allowing 14 homers in 13 starts.

Aaron Sanchez hasn’t been much better. A flukishly high 80.4 percent strand rate has helped the rookie right-hander maintain a playable 3.55 ERA. But Sanchez has walked batters more often than any other AL pitcher and ranks among the league’s worst starters by fielding-independent metrics.

With Sanchez and fellow promising young arms Daniel Norris, Drew Hutchison, and Marcus Stroman, the Jays came into the spring with plenty of optimism surrounding the rotation. Then Stroman tore his ACL before the season began. Sanchez is now on the DL, Norris has struggled, and Hutchison has become one of the most volatile starters in baseball. Forget optimism; the team has no clue when it’s going to get a solid start.

Still, despite that highly suspect rotation, there are multiple reasons to believe the Jays will still be playing baseball come October.

Of course, it starts with that terrifying offense. Donaldson (.305/.361/.557) and Martin (.278/.361/.510) have been two of the team’s best hitters, combining on-base prowess with a total of 27 home runs. Per usual, Jose Bautista has been a walks and homers machine. Throw in surprising contributions from fill-in left fielder Chris Colabello (.342/.379/.480) and rookie second baseman Devon Travis (.271/.336/.504), and you have the most potent offense baseball has seen in years, one that’s produced especially dominant results against left-handed pitching.3

Regression might hit in places — Colabello carrying a league-leading, off-the-charts .444 batting average on balls in play isn’t going to last, for one. But that could be offset by another positive factor in Toronto’s favor: improving health. The Jays spent 61 days in first place last year before going into a tailspin induced mostly by injuries to Brett Lawrie, Edwin Encarnacion, Adam Lind, and others. This year, they’ve already endured Jose Reyes’s annual DL stint, plus shoulder injuries to Bautista and Encarnacion, the latter still affecting Edwing’s swing. Travis could return from the DL by this weekend, and outfielder Michael Saunders could follow soon afterward. In other words, this offense is pummeling the league, and it still has yet to reach full strength.

The Jays can also take comfort in the sluggish competition they face in the AL East. The Rays have MacGyver’d their way to first place despite a rash of pitching injuries and multiple lineup holes, but they still look like an undermanned team that’s destined to fall back. The Yankees and Orioles have played well lately, but both clubs have multiple weaknesses of their own. And while the Red Sox probably won’t play this poorly all year, they’re a mess right now. The prospect of no 90-game winners in the East, plus the added bite at the apple that comes with having two wild cards per league, means that a flawed team like the Jays can certainly sneak into the playoffs, if conditions are right.

So how can those conditions be tipped more toward their favor? No team stands to benefit more from aggressive trade-deadline shopping than the Blue Jays — and the area to improve is obvious.

When GM Alex Anthopoulos wanted to make moves at last year’s trade deadline, he got rebuffed by the corporate owners at Rogers Communications, who claimed the budget was tapped out. Rather than taking fliers on high-risk, moderate-reward pitchers over the winter, the Jays mostly stood pat outside of the Donaldson and Martin moves. As TSN 1050 reporter Scott MacArthur noted on this week’s podcast, that lack of offseason spending on pitchers could leave the Jays with something like $6 million to $10 million to spend on arms between now and the deadline.

They also have the ammunition to get it done. Even with Stroman out, a mere partial list of intriguing early-to-mid twenties pitching chips includes Sanchez, Norris, Miguel Castro, Roberto Osuna, 2012 sandwich-round pick Matt Smoral, 24-year-old Triple-A starter Matt Boyd (1.12 ERA in 13 minor league starts this year), and 22-year-old righty (and 2014 no. 9 overall pick) Jeff Hoffman. Throw in the Jays’ top three picks this year — all of whom are pitchers — and Toronto has a war chest of pitching talent it can leverage to reel in a top-flight starting pitcher like Johnny Cueto, a mid-rotation type like Scott Kazmir, Matt Garza, or Mike Leake, or a bullpen ace like Jonathan Papelbon or Aroldis Chapman.4

It’s been 22 years since Joe Carter touched ’em all. Given Toronto’s historically powerful offense, improving health, iffy in-division competition, and a trade market wide open to bold moves for quality pitchers, the opportunity to end the longest postseason drought in baseball is right there in front of them. One more arm would make it a lot easier to reach.

'The Jonah Keri Podcast': Scott MacArthur on the Blue Jays, and Justin Halpern on the Padres