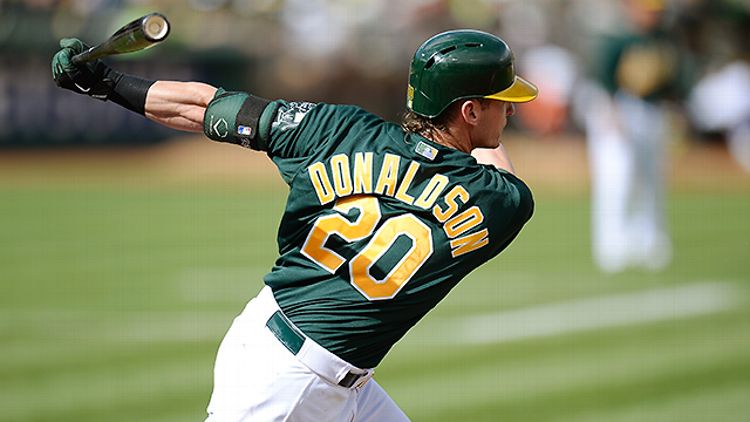 The first week of the MLB playoffs is upon us, and for the baseball fans who mostly just watch their favorite team, this means a torrent of new and exciting players to watch. If you’ve been following the Braves all season, for instance, you’ll recognize our must-watch shortstop selection, but you might not be intimately acquainted with the rest of the players on this list. (If you’ve been following one of the other four NL East teams all season, you might not be intimately acquainted with things like “happiness” and “optimism.”)

But fear not, because we’re here to help, assembling an aggregate starting lineup featuring the one player at each position who’s interesting, fun to watch, and poised to play a significant role in the coming postseason. And while a few of these guys are going to get MVP votes, you won’t find Miguel Cabrera, Yasiel Puig, or Clayton Kershaw on this list. They may be three of the most exciting players in the game, but if you need us to tell you about them at this point, you might just be beyond saving.

It may seem like Martin has been around forever, but he’s worth monitoring right now. The Pirates signed Canada’s greatest catcher to a two-year, $17 million contract — hilariously, the richest contract they’ve ever given to a free agent — hoping he’d be a stabilizing veteran presence on a young team. And he has been. But Martin’s only 30, and he’s flown under the radar despite starting for a playoff team in six of his eight major league seasons.

While Martin hit just .226 this year, perhaps no position player in the game derives less of his value from his batting average. In general, the offensive standards for catchers are unbelievably low; in particular, Martin drew walks in 11.5 percent of his plate appearances and hit 15 home runs, making him almost exactly a league-average hitter. And unlike most catchers, Martin can also get his on the bases, as his 89 career steals lead active catchers by a wide margin (only Miguel Olivo has even half as many). Throw in Martin’s defense, and both Baseball-Reference and FanGraphs calculate Martin as being worth four wins in 2013, which is roughly the same as Adam Jones and Chase Utley, both of whom are considered star players for their teams.

The Pirates have young stars like Andrew McCutchen and Gerrit Cole. They have a bunch of solid, underrated players like Neil Walker and Marlon Byrd. Those guys all warrant nods. But Martin is the kind of unheralded rock who deserves our attention this postseason.

About five years ago, the Dodgers brought up a bunch of young, good-looking position players and promptly went to the NLCS in consecutive years. As a result, Loney got lumped in with Martin, Matt Kemp, and Andre Ethier without actually being any good. If you want to understand positional adjustments, looking at Martin and Loney is a good place to start. They’re roughly similar offensive players: Loney hits for a better average and has a little more power, while Martin walks more, but they’re both about league-average hitters.

The difference is, it’s a lot easier to find a first baseman who can hit than it is to find a catcher who can hit, which explains why Martin’s been closer to All-Star level over the years, while Loney’s refusal to wear no. 1 (as one is the Loneyest number) is only the second most disappointing thing about his career.

Nevertheless, Loney has experienced a career renaissance in Tampa Bay, hitting .300/.349/.432 and posting a .355 batting average on the road (for whatever that’s worth) for a 91-win team. Suddenly, Loney is a key offensive player for a team with championship aspirations, and his influence will be as important to the Rays as his renaissance has been intriguing.

Kipnis is the most underrated player in baseball. I mean, if there were a guy who played an up-the-middle position, hit double-digit home runs, and stole 30 bases per year, you’d know about him, right? Particularly if he played for a playoff team? And definitely if he were the kind of scrappy, dirty-jersey-and-stubble-wearing, balls-out “throwback” player sportswriters usually fall over themselves trying to applaud, right? Sure, Kipnis made the All-Star Team, but few casual fans realize how good he really is. He was worth almost six wins, according to Baseball-Reference, and at just 26 years old, he’s going to be around for a while.

There’s something about this kind of player, the second baseman who does everything well and Plays The Game The Right Way but still doesn’t get the respect he deserves. It looks like Kipnis is the heir apparent to the Chase Utley/Ian Kinsler throne for the second baseman who’s not just great at his position, but who’s great in the game.

Simmons is the most exciting player in the game today, on any team or at any position. With a .248/.296/.396 slash line, he deserves to get some down-ballot MVP votes, and he will.

Some of the players on this list need to be sold a little bit, but if you’re not watching Simmons, you’re only hurting yourself.

Both FanGraphs’ and Baseball-Reference’s WAR put Donaldson in a dead heat with Cabrera for most valuable third baseman this year. That might be a fluke, fueled in part by Cabrera’s defense resting on the extremes of what the advanced metrics can measure — in other words, Cabrera’s glove is so bad, it broke math. Given the choice, I’d take Cabrera over Donaldson.

Of course, Cabrera is one of the best players in baseball, so saying that doesn’t diminish what Donaldson has achieved this year. A former top college catcher who came to Oakland in the Rich Harden trade in 2008, Donaldson is the first Oakland player since 2004 to post a .300 batting average. To that, he added 76 walks and 64 extra-base hits, plus the occasional bit of defensive panache. The A’s were a great story once again this season, and Donaldson was a big reason why.

A middle of the order doesn’t get much better than Cabrera and Prince Fielder, but for them to drive in runs, someone needs to be on base. Jackson is a traditional leadoff man, someone who uses his bat rather than his plate discipline to get on base, and he can steal a bag when he’s there. Jackson stole only eight bases in 2013, after averaging 20 in his first three seasons, but his speed is still a threat. And really, there’s no sense running into outs on the bases when Cabrera and Fielder are there to drive you home.

Detroit has the big bats and the stud arms, but despite all those stars, the Tigers won’t return to the World Series unless Jackson is setting the table. He’s more crucial than he seems.

The other side of the run-scorer/run-producer dynamic is Choo and Brandon Phillips. Phillips considers himself a run producer and middle-of-the-order bat, which is true in the sense that Dusty Baker hit Phillips cleanup 127 times this season. And while Phillips drove in 103 runs, that had more to do with another former Cleveland Indian, Choo, than with Phillips himself.

Phillips actually posted a slugging percentage that was below the NL average, despite playing in one of the league’s better hitters’ parks. But hitting behind Choo and Joey Votto, literally the two best on-base guys in the NL this year, kept the Reds from succumbing to Baker’s horrible lineup construction.

If the Reds make it out of the wild-card game, expect Choo to be on base constantly for as long as the Reds stick around.

For a long time, if a fast player with decent contact skills had a tough time getting on base, the orthodox thing to do was to get him to try to cut down on strikeouts and live and die with his speed and bat. Recently, several such players have gone the other direction, trading contact skills for power. Two younger players, Simmons and Carlos Gomez, have enjoyed breakout seasons, but the 33-year-old Crisp has quietly hit a career-high 22 homers and posted his best slugging percentage since 2005, and along the way, he’s broken a full-season 10 percent walk rate for the first time in his career.

Age hasn’t slowed down Crisp much, either, as the Los Angeles native with the Bake McBride haircut swiped 21 bases this season and played a solid center field. Yoenis Cespedes puts on the power displays, but Crisp is actually still the better player.

There’s not an unheralded DH worth talking about this year, so our no. 9 spot goes to a pitcher. Buchholz is one of those pitchers who struggles to put it all together at once; injuries have dogged him throughout his career, including limiting him to 16 starts this season. In 2010, he posted a 2.33 ERA and finished sixth in Cy Young voting, but he hadn’t returned to that form until this season. Part of that is injury-related, but mostly it’s because Buchholz wrestles with his peripherals like Rulon Gardner wrestled with Alexander Karelin.

Pitchers can generally control a few things: strikeouts, walks, and, to a certain extent, ground ball/fly ball rate. Between those stats and a pitcher’s eventual performance stand several things: how many fly balls carry out of the ballpark and how many die at the warning track, how many ground balls are hit at infielders and how many find holes for hits, and how many of those hits come with the bases empty or cluster together for big innings.

In 2010, Buchholz stranded 79 percent of his base runners, posted a .261 opponent BABIP, and saw about one in every 20 fly balls he allowed leave the yard. He was hurt in 2011, but when he came back the next year, the things he controlled — strikeouts, walks, and ground ball ratio — stayed about the same. He stranded only 69 percent of baserunners, however, and he allowed a .283 BABIP while giving up a home run once in every eight fly balls. His ERA nearly doubled. Those luck-based stats have once again been kind to Buchholz in 2013: When he pitched, he posted an 83.7 percent strand rate, a .254 BABIP, and saw 4.5 percent of the fly balls he allowed turn into home runs. But he also kicked up his K/9 ratio to nearly eight, which means he’s relying a little less on luck to get out of jams.

Buchholz’s continued success will be key for the Red Sox, because while the Rangers, Tigers, and Rays all have at least one pitcher they can start with the season on the line, Boston’s rotation is more deep than it is intimidating. If Buchholz can be that guy for the Red Sox, their chances of winning a third title in 10 years will look a lot better.