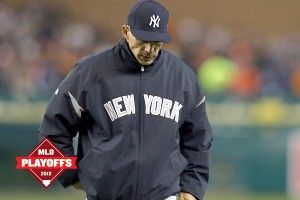 Thoughts on a nail-biting ALCS Game 3, now with 13 percent more Inquiries of Interest:

“I JUST HAD A GUT FEELING.”
If you ever want to gain some perspective on how the human mind works, try going for a drive with 3-year-old twins. On even the clearest light-traffic day, you must process thousands of pieces of external stimuli, then make split-second decisions accordingly. A rational adult mind solves this dilemma by ignoring 99 percent of what’s going on around him. You’re eyeing the guy tapping his brakes in front of you, the guy speeding toward your blind spot beside you, and the yellow light up ahead. Somewhere deep in your brain, you’ve noted how that one cloud looks a bit like a donkey riding a rocket ship. But your subconscious knows that if you fixate on cosmonaut donkeys, you won’t last long before getting into an accident. So your brain takes in the few pieces of information it needs right then, and effortlessly ignores everything else.

Three-year-olds don’t do this. To them, everything is new: the shape, color, and size of other cars on the road. The buildings flanking each side, the flower bed in the median, and the Lhasa Apso who’s about to spoil the bed of tulips unless its owner swoops in right away. They see and hear everything you do, too. You censor yourself by not swearing at the slowpoke ahead of you, only to have your post-toddlers imitate the exasperated “Psssshhhh” you threw at no one in particular in lieu of conjuring up F-bombs. The way our brains work is twisted, if you think about it: Takes a more advanced, adult mind to miss almost everything going on around you, and a less developed, more primitive mind to pick up on everything at once.

Managing a high-stakes baseball game can be like driving a car with two vocal 3-year-olds riding in the back. A novice might get rattled by 42,970 screaming fans or the chill of an autumn night game, to say nothing of the dozens of variables that might factor into any one decision. To brush away all those distractions, Yankees manager Joe Girardi carries a binder stuffed with statistical nuggets. It’s his way of keeping hard data close at hand when a passel of peeing pups might otherwise pilfer his perspicacity.

Six days ago, Girardi admitted that he chucked his binder in the trash, leaving a game-changing decision up to his gut. It was the ninth inning of ALDS Game 3 against the Orioles, and the skipper pinch-hit Raul Ibanez for Alex Rodriguez. This happened, then this happened, thus making one of the most talked-about moves in recent postseason memory also one of the most successful. It was after those two Ibanez homers that Girardi uttered the line about having a gut feeling. Thing is, it wasn’t all gut, not by a long shot. Ibanez had been a much better hitter all year long against right-handed pitching than A-Rod was, and the gap between the two widened as Rodriguez slumped down the stretch. The short porch in right field also figured to be more inviting for a lefty hitter like Ibanez than for a righty like A-Rod. Dig deep enough and you might’ve found a few other statistical pillars on which to build an Ibanez-over-Rodriguez case.

The ninth inning of Tuesday night’s 2-1 Yankees loss to Detroit, on the other hand, will go down as one of Girardi’s starkest examples of gut instinct over hard data. It just might not have seemed as obvious to Girardi because these weren’t gut moves … they were gut non-moves.

Justin Verlander shut down the Yankees for the first eight innings, before Eduardo Nunez parlayed a hard-fought at-bat into a solo home run to cut Detroit’s lead in half. Verlander then got Brett Gardner to ground out to the mound. After 132 pitches, Verlander’s night was done. With Jose Valverde no longer the Tigers’ closer, Jim Leyland turned to left-hander Phil Coke instead. There was some logic behind the move, with the next four batters due up going lefty-switch-lefty-lefty. But Coke’s entry into the game also created an opportunity for the Yankees. Right-handed batters hit .396/.446/.604 this season off Coke, for a 1.050 OPS; by way of comparison, major league leader Joey Votto posted a 1.041 OPS this year, Triple Crown winner Miguel Cabrera .999. Coke’s career splits aren’t nearly that dramatic, with righty hitters posting an .802 OPS against him, lefties .623.

Under normal circumstances, this wouldn’t be an easy situation to exploit. Players tend to fare significantly worse as pinch-hitters than when used as starters. Also, most teams tend to lack impact bats off the bench, let alone impact bats who happen to hold the specific advantage you’re seeking. As luck would have it, the Yankees were in an absolutely perfect position to capitalize. Nick Swisher was riding the pine, having gone just 4-for-26 in the postseason while playing shaky defense. Rodriguez was also sitting, suffering through a slump that had lasted for weeks and failing to tally a single hit against a right-hander all postseason. There’s a fine line that managers must straddle between honoring larger sample sizes (such as A-Rod’s .924 OPS vs. lefties even in a down year for him and Swisher putting up solid numbers from both sides of the plate this season) and weighing recent results. Generally speaking, you don’t want to get too worked up over, say, 26 at-bats. But you do want to take all factors into account, be it a player’s fatigue, his swing being a little out of whack, or a simple case of shaken confidence.

Still, after weighing all of that, the tangible and intangible considerations, everything that might go into a binder and every instinct the manager might have … Girardi still made the wrong choice. There were two points during the ninth in which Girardi should have summoned a pinch-hitter. When Coke entered the game, Ichiro was the scheduled hitter. Pinch-hitting for him wouldn’t have been a knock on Ichiro, who’d collected two hits to that point in the game to go with four other hits in the first two games of the ALCS and a .322 average in 67 regular-season games with the Yanks. It would have been a straight percentages play, banking on Coke making hitters look like a rich man’s Miggy Cabrera and on A-Rod and Swisher being better than your typical hitters against left-handers. Throw in the fact that Leyland couldn’t yank Coke from the game until the lefty had faced at least one batter, and Girardi had a chance to get a very favorable matchup. He declined, and Ichiro grounded out.

Girardi would get another chance to deploy his bench three batters later. Mark Teixiera singled and Robinson Cano did the same (breaking an 0-for-29 megaslump), bringing Ibanez to the plate with two on and two outs. Ibanez did hit his game-winning homer in that ALDS Game 3 off a lefty, Brian Matusz. He’d also hit .197 with no homers in 65 plate appearances against southpaws this season, with an ugly .639 OPS from 2009 through 2011 facing lefties. You could argue that the Tigers would have countered with a right-hander like Joaquin Benoit or Octavio Dotel if Girardi subbed in A-Rod for Ibanez. But this ignores Benoit’s very even splits, and the Yankees being able to counter any conceivable move with Swisher the switch-hitter. Girardi leaving in Ibanez with the game on the line came down to pixie dust worship: Ibanez had been on fire, producing a series of huge hits for the Yankees over the past couple weeks. But he still might be the worst Yankee hitter on the roster against left-handers, and Coke offered a gigantic split ripe for exploiting. Never happened. Ibanez worked the count to 3-2, then Coke struck him out on a wicked slider to end the game.

There’s no guarantee that using A-Rod or Swisher at some point would have salvaged the game for the Yankees. But the bottom line is that the Bombers are now one game from being ousted from the playoffs. And for one night at least, their manager didn’t give them their best chance to win.

KOBE BRYANT IS THE BEST. JUST ASK KOBE BRYANT.
When we last left the Black Mamba, he was ecstatic over the Yankees’ Game 3 win over Baltimore last round and the good things the win meant for his friend A-Rod. Wait, did I say he was ecstatic? I meant he was a cynical jerk about it. When asked how he felt about the Yankees pinch-hitting Ibanez for A-Rod in the ninth inning of that game, Kobe offered this: “I don’t like that. That’s not good for the chemistry of the team. I’m going to have to call A-Rod.”

Apparently Kobe’s powwow with his buddy didn’t have much short-term effect, as A-Rod continued to slump thereafter, culminating in his getting benched Tuesday night. To Kobe, there was only one explanation: “He’s one of the best ever to play. The difference is, sometimes he forgets he’s the best. I don’t.” Seems crazy to portray A-Rod as anywhere near the best in his sport at this late stage of his career. Apparently denial is a transmittable disease.

JUSTIN VERLANDER, FINDING ANOTHER WAY
Though he pitched eight shutout innings and nearly went the distance (before getting sidetracked by Eduardo Nunez’s home run), Verlander wasn’t quite his usual self Tuesday. He ran up deep counts against multiple hitters, struck out just three in 8⅓ innings, and induced 14 fly outs versus just eight ground outs. Normally under such circumstances you might attribute those results to luck, specifically the good fortune to not get burned on balls in play. But Verlander repeatedly induced weak contact by Yankees batters. He also walked none and never pitched under much duress, such that he could still peek into the high-90s late in the game and may well have been able to finish what he started if not for Leyland’s eventual prudence.

If you’re still looking for something that might explain Verlander’s success on a night in which strikeouts were scarce, we offer this.

DO THE YANKEES MISS DEREK JETER?
They miss his bat, yes. Jeter hit .316/.362/.429 in 159 games this year and very likely would have offered at least some help to an offense that’s been completely handcuffed. Nunez’s ninth-inning homer was certainly impressive, and Jeter’s a huge defensive liability at this stage of his career. Still, the easy answer is also the correct answer: The Yankees would be better off with him in the lineup, and their chances of winning the World Series dropped when Jeter suffered his season-ending injury.

Would Jeter have made a difference in the clubhouse, especially since he missed Game 3 to see specialists instead? It’s possible. But there’s just no way to argue the case definitively, or to claim that Girardi’s lost the clubhouse, or that a lack of mystique and aura is the reason the Yankees are losing. Not at a time when if they tried to hit the panic button they’d miss it by two feet.