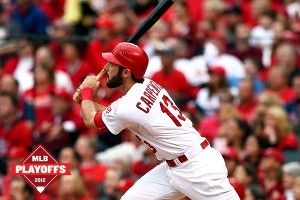 MIKE MATHENY IS LEARNING ON THE JOB
The Cardinals’ first-year manager certainly wasn’t Mattingly-esque in his bunting this year, but the Cardinals did sacrifice more than all but five other teams, a bit odd for an offensive powerhouse that scored more runs than any National League team except the Brewers.

He’ll make La Russa’s extra-tinkery moves on occasion, too. Facing what he had to know would be one of the highest-leverage situations of the game, Matheny tapped 22-year-old righty Trevor Rosenthal to pitch with two on and two outs in the sixth, leading by a single run. Rosenthal got Angel Pagan to ground out and end the inning. But rather than bring out a perfectly fresh Rosenthal to start the seventh, Matheny hewed to his rigid seventh-eighth-ninth formula, calling in no. 2 setup man Edward Mujica because that’s what he always does when he has a lead. Mujica allowed three sharply hit balls, two of them going for hits. That brought Matheny back out for another pitching change, this time for righty Mitchell Boggs. Not content to do only that, Matheny also made a double-switch, inserting light-hitting outfielder Shane Robinson into the pitcher’s spot and pulling Allen Craig, one of the team’s two best hitters (albeit one in a playoff slump), from the game. Matheny would end up double-switching again an inning later, knocking Robinson out of the game and rendering the whole exercise even more pointless. Burning through three pitchers to get four outs also limited Matheny’s options for when the game resumed after a three-and-a-half-hour rain delay.

Still, the Cardinals skipper could have used, say, right-hander Fernando Salas to start the eighth, saving the fire-breathing Motte for the ninth. Instead he tapped Motte, the Cardinals’ best reliever, to go longer than any other closer had for a save in years. The bearded one retired all six batters he faced, needing just 19 pitches to get through those two innings. And like that, Motte became the first Cardinals reliever to record a six-out postseason save since Steve Kline.

MATT CARPENTER IS THE NEW DAVID FREESE
When Carlos Beltran exited the game after the first inning with a strained left knee, you might have expected a huge letdown. All Beltran had done coming into Game 3 was hit .378/.489/.838 with 14 home runs in 30 games, making him the best hitter in playoff history with that many games played. In his stead, the Cardinals subbed in a rookie and 13th-round draft pick with five career postseason at-bats. Matched against one of the best pitchers on the planet in Matt Cain, St. Louis sub Matt Carpenter worked the count to 2-2 … then cranked a two-run homer over the right-field wall, driving in what would prove to be the winning run and earning his first career playoff curtain call.

The 26-year-old Texas native hit a robust .294/.365/.463 in 340 plate appearances this season, subbing for Lance Berkman and other injured players and continually finding ways to make himself useful. Carpenter is just the latest in a long line of recent Cardinals to have shot up the minor league ranks and found success in the majors, despite modest pedigrees and zero attention as prospects. Twenty-second-round-pick Jaime Garcia was a rotation mainstay before getting hurt in the NLDS, while Motte was a 19th-rounder. Shutdown setup man Mitchell Boggs was a fifth-round pick; 2011 playoff beast and current cleanup hitter Allen Craig got tabbed in the eighth, 2011 World Series hero David Freese in the ninth. Most of those players were drafted by Jeff Luhnow, who was one of the game’s most analytically inclined scouting directors before taking the job as Astros general manager. Farm director John Vuch helped oversee the young Cardinals’ minor league development, and Tony La Russa and Mike Matheny have offered opportunities in the big leagues, with both managers showing no fear of thrusting young, unproven players into big spots.

What the Cardinals lack in Bryce Harper–level no. 1 picks they’ve made up for by striking gold again and again in the later rounds, pulling off shrewd trades and well-timed signings to round out the roster. The postgame reports on Beltran weren’t good, meaning we could see Carpenter start Game 4. When you’re missing a player who’s topped Babe Ruth for postseason heroics, you know you’re going to miss something.

HUNTER PENCE IS STRUGGLING, AND IT’S MESSING WITH THE GIANTS’ OFFENSE
The Praying Mantis needs to shed his exoskeleton made of outs, or the Giants might not be long for these playoffs. The Giants right fielder went 0-for-4 Wednesday night, stranding three runners and dropping his 2012 playoff line to .161/.188/.161. Pence’s struggles have prompted pitchers to be extra-cautious with Buster Posey, resulting in six walks in eight games for the Giants’ cleanup hitter.

Pence was hardly alone in failing to come through in big spots for Game 3. The Giants went 0-for-7 with runners in scoring position, with Pence and Pablo Sandoval adding to the out-making by both hitting into double plays. As the great McCovey Chronicles writer Grant Brisbee noted, the Giants became just the 10th team to put 14 runners on in a playoff game and score one run or fewer.

BRUCE BOCHY MADE A TOUGH TIME EVEN TOUGHER
With one out and runners on first and third, Bochy order Matt Cain to lay down a sacrifice bunt. The idea was to stay out of a double play, and also to try to get two runners into scoring position rather than one for Pagan. Even with a pitcher this was a bad idea. Research by analyst Tom Tango shows that going from runners on first and third and one out to second and third with two outs slices, on average, about 0.6 runs off a team’s expectancy for a given inning. And that assumes a successful sacrifice. Cain could have popped up his bunt attempt, struck out (Bochy still had him bunting with two strikes), or even bunted into a double play; an error by the defense was also possible, though not as likely as Cain botching his sacrifice try in some way.

These are broad numbers, of course, and the decision does make more sense with a pitcher than a position player, at least (still not enough to justify the bunt, though). But Cain’s a better hitter than your average pitcher, too, hitting a decent .176/.197/.243 this year in 84 plate appearances, with a home run and two doubles on the ledger. Cain’s fourth-inning bunt did nothing except bring the Giants one out closer to another scoreless inning. When Cain singled sharply with two outs in the sixth, you had to wonder: Where was this swing when the Giants really needed it?