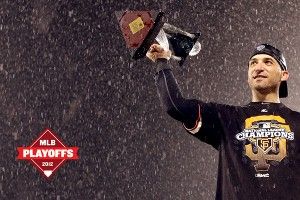 In 2012, Marco Scutaro escaped from the Colorado Rockies. All they found of him was a North Face fleece, an empty bottle of Fat Tire, and an old Dante Bichette jersey, damn near worn down to the nub. I remember thinking it would take a man 600 games to tunnel to a better team. Old Marco did it in fewer than 100. Oh, Marco loved the city. I imagine it appealed to his microbrew-loving nature. Still, there’d be a 14-2 loss here, a devastated pitching staff there. Getting out of playing for the Rockies this season was a study of pressure and time. That’s all it takes, really: pressure and time. That, and another team’s big goddamn need for a second baseman. Like I said, in Coors Field a man will do most anything to keep his mind occupied. Turns out Marco’s favorite hobby was totin’ his World Series dreams out into LoDo, a handful at a time. I guess after Guthrie was killed, Marco decided he’d been here just about long enough. Marco did like he was told, rebuffed those trade questions as if he were feeling fine. The rest of the league simply didn’t notice. Neither did I … I mean, seriously, how often do you really look at a man’s blues? Marco crawled to freedom, away from a 98-loss season of shit-smelling foulness I can’t even imagine, or maybe I just don’t want to. Ninety-eight losses … that’s more than eight months’ worth for the San Francisco Giants, who are now just four games shy of another championship.

Marco Scutaro — who crawled through a river of shit and came out clean on the other side.

Aggressive and adept at making the right bullpen moves throughout the postseason, Bochy managed no differently when staked to a huge lead. With the Giants up 7-0 in the sixth, two outs and two on, the Giants manager yanked Matt Cain from the game. The big righty had thrown 102 pitches, but he’s known for his durability, and Daniel Descalso didn’t exactly pose a massive threat. Nonetheless, Bochy weighed his options, decided tough left-hander Jeremy Affeldt made a tougher matchup for the lefty-swinging Descalso, and made the call to the bullpen. Affeldt got Descalso to pop out in short order, and that was that.

Bochy didn’t stop there. After Affeldt breezed through a mostly uneventful seventh, Bochy tapped Santiago Casilla to start the eighth, with an 8-0 lead. Casilla did allow a pair of singles, but still had two outs with Descalso coming up again. Yet again, Bochy played matchups, summoning Javier Lopez to face the apparently terrifying Cardinals second baseman. Matheny countered with banjo-hitting catcher Tony Cruz. Cruz struck out looking, and that was that.

Bringing in closer Sergio Romo with two outs, two on, a biblical rainstorm in progress, and a 9-0 lead in the ninth was excessive. But you can’t deny that Bochy managed to win.

If Matheny was trying to win after falling behind 2-0 in the third inning, he had a funny way of showing it. Starter Kyle Lohse had struggled to that point, throwing too many fat pitches, including a hanging slider down the middle that Matt Cain lined sharply to center to cash the Giants’ second run in the second. So when Lohse loaded the bases with nobody out in the third, Matheny pulled his starter a little quicker than he might’ve were this a regular-season game. Problem was, Matheny didn’t go to his dominant closer Jason Motte. Or his highly effective setup man Mitchell Boggs. Or even his flame-throwing right-hander Trevor Rosenthal. He chose Joe Kelly, a reasonably effective right-hander who’s still generally considered the no. 6 or no. 7 option in the Cardinals pen.

There’s a good chance that managers would do better to put their best arms in the highest-leverage situations whether it’s April or October, and not be so rigid about who saves games, who pitches the eighth, or who pitches the seventh. But at least you can kind of understand relievers’ desire to know their role over the course of the season. The playoffs should be different. In the postseason, you need to have everyone ready to pitch at any moment, never more so than in a Game 7.

The Cardinals still had a chance to keep things close and escape a big jam when Matheny brought in Kelly to face Hunter Pence with the game more or less on the line. Some crazy stuff happened after the pitching change, much of it not Kelly’s fault. Still, when the Cardinals finally ended the inning down 7-0, no one could rightly claim that Matheny had made the best choice given the circumstances. When Motte came in to start the eighth with the Cardinals down 8-0 and the game long since lost, Matheny’s third-inning gaffe looked that much sillier.

YET AGAIN, THE GIANTS CAUGHT THE BALL, AND THE CARDINALS DIDN’T

St. Louis’s leaky defense had already become a running theme in this series, and it bit the Cardinals in the ass again in Game 7. The crushing blow was a potential double-play ball hit by Pence that got misplayed into a three-run back-breaker. You could argue that Pete Kozma had little chance on a ball that hit Pence’s bat not once, not twice, but thrice on its way toward short, generating so much spin that Kozma broke the wrong way and looked awful as the ball skidded by him into the outfield, then ate up Jon Jay in center for good measure. But the defense kept on bumbling from there, led by Kozma. Slow chopper up the middle where the only play’s to first? Kozma went home instead, and all runners were safe. Another double-play opportunity? Kozma’s flip to Descalso from point-blank range sailed high, forcing Descalso into an awkward throw to first and leading to another run. His Game 7 debacle put a bow on an ugly final three games of the series for Kozma, the rookie who’d come up with a string of huge hits down the stretch as the sub for injured starting shortstop Rafael Furcal.

Meanwhile the Giants got two nimble plays from Brandon Belt at first, multiple running catches by Gregor Blanco in left, a pair of difficult-but-seamless-looking plays on short hops by Scutaro, and a great leaping catch by Brandon Crawford at short that saved two runs and may well have been the biggest play of the game, all things considered. The Giants should have a big defensive edge against the Tigers in the World Series, too, by the way.

THE GIANTS OUTPLAYED THE CARDINALS …

… but the clinching factor was the Giants outlucking the Cardinals, too. During the regular season, St. Louis ranked among the better-hitting teams in baseball with runners in scoring position, racking up a line of .264/.353/.422 in those spots. Meanwhile the Giants were middle-of-the-pack, hitting .259/.336/.386 with RISP. That’s aside from the fact that on an individual basis, the vast majority of players don’t perform significantly better over the long haul in high-leverage situations vs. low-leverage ones. In other words, clutch hitters, by and large, don’t exist. (“Unclutch” hitters are also exceedingly rare — probably because if you’re truly a big choker, you probably won’t make it to the big leagues in the first place.)

In winning the final three games of the NLCS and overcoming a 3-1 deficit, the Giants didn’t hit any better with runners in scoring position than they had during the season, managing an 8-for-32 line (.250). But the Cardinals couldn’t get anything at all to fall in for them when they needed it most, partly due to strong San Francisco defense, but mostly due to an ugly run of ill fortune. When you go 1-for-21 with RISP over the course of three games, there’s a pretty good chance you’re going to lose all three of those games.

All of which means that after a decade of lockup, the NLCS MVP, and the Giants’ own Andy Dufresne, finally gets his shot at a World Series.