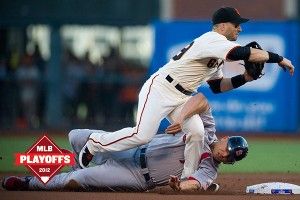 The San Francisco Giants have their hands full: They might have just lost their starting second baseman, and after Game 3 of the NLCS, their starting rotation becomes a total mystery. But that doesn’t matter today, because they are heading back to St. Louis with the series tied. For that they can thank a pitcher who should be the biggest story in baseball … if a half-dozen even wilder stories hadn’t cropped up, and if he were doing what he’s doing for the first time, not the second.

Ryan Vogelsong allowed just one run and six base runners over seven innings Monday, pacing the Giants to a 7-1 rout of the Cardinals. It was the kind of pitching performance you might call Madduxian, if every pitcher throwing below 95 mph and showing a bit of command weren’t already getting Greg Maddux comparisons.

Vogelsong tallied just five swinging strikes in the 106 pitches he threw over seven innings. But he mixed pitches expertly, inducing weak Cardinals contact all game long. There’s Vogelsong throwing breaking stuff to Daniel Descalso, then firing a 92-mph fastball that looked like 97, up and away, right by him for strike three. There’s Vogelsong throwing a nasty two-seam fastball to Allen Craig, striking out the Cardinals slugger on a pitch that started middle-in and ended inside, off the plate, and past Craig. Outside corner to Skip Schumaker for a strikeout, in on the fists to Matt Holliday for a popout. When it was over, the pitcher who disappeared from the majors for five seasons became the first Giants starter to make it through six innings this postseason, which was enough to give the Giants their first home win of these playoffs.

What makes Vogelsong’s performance all the more impressive is the path he took to get to this point. Saddled with injuries but mostly just subpar performances, he disappeared from the majors following a 2006 partial season in which he tossed 38 innings and posted a 6.39 ERA. His last game of that season was June 22, 2006, and his next major league game was on April 18, 2011, a span of four years and 300 days. Somehow he returned better than ever, delivering a 2.71 ERA and 3.67 FIP while throwing 179 2/3 supremely unlikely innings. He found similar results this year, with 189 2/3 innings pitched, a 3.37 ERA, and 3.70 FIP.

Elias Sports Bureau searched for any player who went at least four years and 300 days between major league games played and then went on to pitch in a postseason game at some point after that nearly five-year absence. It turns out what Vogelsong has done is nearly unprecedented. Mike Cuellar went five years and 57 days between major league appearances, then posted a 1.50 ERA in three starts during the 1969 playoffs; Vogelsong’s 1.50 ERA in two postseason starts this year has matched that mark.

That kind of pitching performance is great, but the Giants had other problems to address. The latest statistical research confirms that teams tend to win more games when they score more runs; the Giants scoring more runs on Monday than they had in their previous three playoff home games this year combined probably helped a bit, too. In homering to start the Giants’ half of the first, Angel Pagan joined Jimmy Rollins as the only players in MLB history to hit two leadoff home runs in a single postseason. But San Francisco broke the game open in the fourth, tallying four runs thanks to errors by Chris Carpenter and Matt Holliday and a two-run single by Marco Scutaro. That Scutaro managed two hits, let alone managed to stay in the game, is a minor miracle given how hard Matt Holliday drilled him on a first-inning takeout slide. Holliday said afterwards he made no attempt to injure Scutaro, while Matt Cain and Bruce Bochy complained that the slide was illegal — a rolling dive over and through second base. Still, if you had to bet, Scutaro missing a game or at least showing up gimpy for Game 3 looks much more likely than any kind of disciplinary action against Holliday. If, like me, you love Giants fans playing an improvised version of Marco Polo with Scutaro’s name, you’re rooting for him to come back ASAP.

Staff ace Matt Cain gives the Giants a good chance to take the series lead, going up against Kyle Lohse on Wednesday. But the Giants look like they might lose one of the most effective members of their bullpen, with Tim Lincecum a good bet to start Game 4 in place of Barry Zito. There’s talk of Zito potentially sliding into the Game 5 spot, taking the place of talented but suddenly erratic lefty Madison Bumgarner.

The safest bet might be that Lincecum’s absence won’t hurt the bullpen all that much: Jeremy Affeldt and Sergio Romo ceded just one base runner in their two combined innings of work Monday, running Giants relievers’ streak to just two runs allowed in their past 21⅔ innings pitched, one run in 15⅓ frames sans Lincecum. I was skeptical of the Giants’ chances against the Reds last series in small part because San Francisco’s bullpen collectively put up a fairly ordinary season, with a couple of solid 2011 contributors taking small steps back and injured Brian Wilson reduced to using teammates’ heads as musical instruments. But the combination of aggressive and shrewd bullpen usage by Bochy, Lincecum’s contributions, and the rest of the Wilson-less crew faring well has turned a unit that might’ve been expected to produce mediocre results into one that’s been integral to the Giants’ postseason success to date this year.

Meanwhile, the ALCS returns for Game 3 tonight. Detroit’s biggest surprise so far this series has been Jhonny Peralta’s stellar defense, which saved multiple runs in big spots in the first two games. That kind of performance might not be sustainable for Peralta or a Detroit D that ranked 27th in the majors by one measure this year.

For the Yankees, a Robinson Cano revival alone could turn the series, which they now trail 2-0. New York’s best player during the regular season is now an 0-for-26 wreck, his deep slump caused by a litany of factors both hitter- and pitcher-related. Regression to the mean is going to happen, but two more poor showings and that regression might not appear until next spring. One player not expected to start at any point in the playoffs, let alone hit, was Brett Gardner. But after missing most of the year with an elbow injury, Gardner now stands a chance of starting against Justin Verlander in Game 3, possibly replacing 4-for-26 Nick Swisher or 3-for-26 Curtis Granderson.

One area where the Yankees appear less willing to gamble is with CC Sabathia. Fellow Yanks starter Hiroki Kuroda dominated for 7⅔ innings while pitching Game 2 on short rest Sunday, raising the possibility that CC Sabathia could go on three days’ rest against Verlander. Instead it will be Phil Hughes, who struck out eight batters and yielded just one run in 6⅔ in his one ALDS start against the Orioles. That’s a performance he will need to at least duplicate for New York to have any chance of bringing this series back to the Bronx.