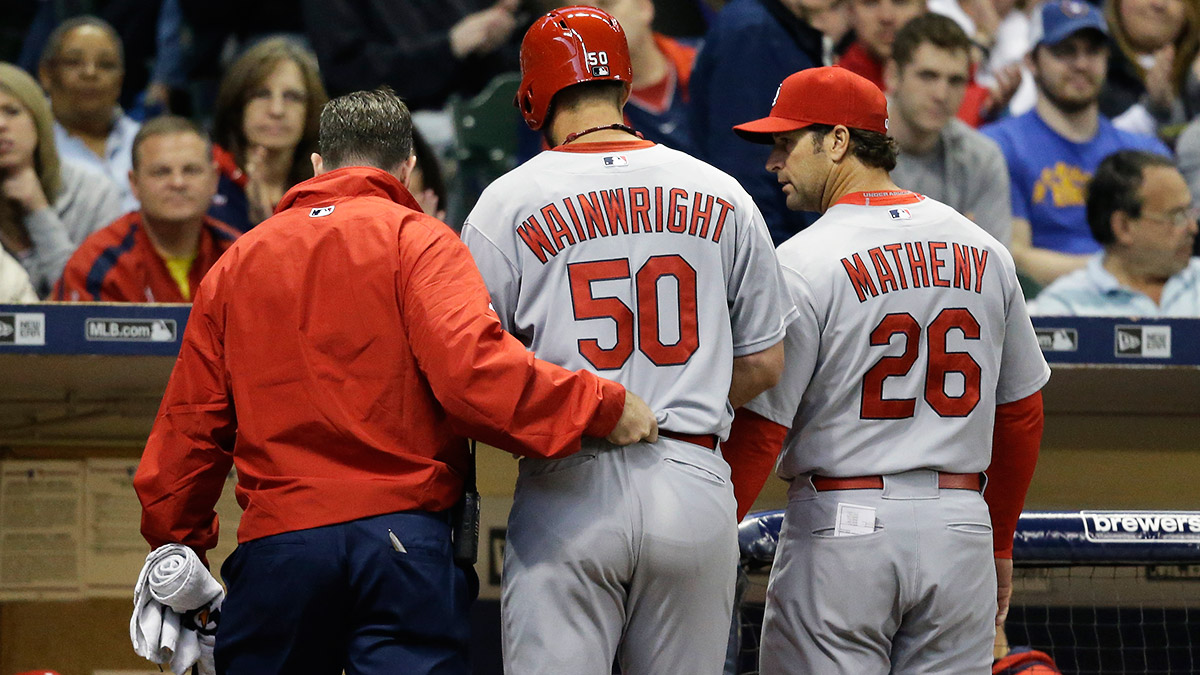 In the wake of a serious injury to Adam Wainwright and a minor injury to and impassioned plea from Max Scherzer, we’re having what seems like the traditional biennial debate about instituting the designated hitter in the National League. I used to love this argument, because I’m one of those wacky archconservative baseball aesthetes who likes watching pitchers hit, and because I enjoy arguing in favor of helpless causes like this one.

But as of this moment, I’m done. Public opinion — insofar as this is an issue that generates public opinion among anyone but dorks like you and me who care way too much about baseball — has swung so far in favor of the DH that its adoption in the NL seems inevitable. To be against the DH is to be against progress. Yesterday, NBC’s Craig Calcaterra offered as persuasive and exhaustive an argument in favor of the universal DH as I’ve seen. Thankfully, he doesn’t fall for the player-safety canard, because after all, this is a biennial debate since a pitcher of consequence only suffers a substantial injury on offense — such as Wainwright being out for the season, as opposed to Scherzer, who’s only expected to miss one start — every couple of years. Pitchers injure themselves by getting out of trucks, riding in taxicabs, and tripping over their pets. And, with alarming frequency, by pitching. But despite what recent events might lead you to believe, pitchers rarely get hurt at the plate. Calcaterra also correctly decries the slippery-slope argument that baseball will one day end up like football, with separate squads for offense and defense.

“No,” writes Calcaterra, “the NL rule should be scrapped because pitchers can’t hit a lick, there is no rational basis for not having the DH in both leagues and, as such, the risks to NL pitchers while batting, however small, are unacceptable.”

OK. Maybe I’ll bite on this one more time.

Calcaterra goes on to say that anti-DH arguments are inherently irrational, that pitchers batting cause baseball to be played at a suboptimal level, and that attempts to justify it are based on tradition and aesthetics. He jumps on one argument that’s couched in religious rhetoric, which is where you go when you have strong feelings that you can’t justify universally through empirics or logic. I concede all of this.

But I don’t concede that irrational means invalid in this case.

First of all, sports fandom is like a religion. It’s a cultural identifier, a tradition passed down through the generations, in which devoutness is a virtue. There are vestments and incantations and regularly scheduled gatherings. There’s a sense not only of belonging to a team, a sect, but of moral superiority in that belonging. There’s the feeling that I don’t root for this team only because my parents did, or because it came into my life at the perfect time — that my team, my belonging, is somehow better than yours. Of course such a belief is based on faith, and not on logic. It’s through faith, or fandom, that we’re redeemed in eternal life, or in enjoying a World Series victory. (If you’re a Mariners fan, both of those things are only going to happen after you die.)

Sports fandom has its own theodicy (How do we justify buying tickets if the owner is a crook, or if a star player is a bad person?), its own eschatology (What happens if the team moves to a different city?), its own pushy, evangelizing devout (Boston fans). So while I’m not going to be weighed down by any hyperventilating Internet rando’s overenthusiastic phrasing, it’s easy to see why people get so worked up about this.

Still, the main issue here is whether aesthetic arguments are invalid.

Sports are fundamentally entertainment. Entertainment, whether it’s sports, film, literature, visual art, music, or something else, does one of two things. First, its beauty can move the consumer to what James Joyce called “aesthetic arrest,” in which the work itself is so remarkable it demands to be awed. Second, it can elicit an emotional response of some kind. Aesthetic. Emotional. These are the terms in which we consume entertainment, such as baseball, and they are proudly, exactly not rational.

We talk about liking one sport over another in aesthetic terms. It’s why, when fans of one sport snark on another, it’s about baseball being too slow or soccer being too low-scoring.

From an aesthetic standpoint, I love the man-bites-dog quality that comes with a pitcher batting. And it’s not just that I like laughing at Bartolo Colon — it brings me extra joy when a pitcher gets a hit. Last year, NL pitchers hit .125/.156/.156, while the league as a whole hit .249/.312/.383. Now, you can look at that .125 batting average and .156 OBP and say that position players are about twice as likely to get a hit or get on base as pitchers, and that pitchers are overwhelmingly likely to make an out. But position players are, too. If a position player bats eight times, he’ll get two hits; if a pitcher bats eight times, he’ll get one. For any given spot in the lineup, that’s about the difference of a hit every other game, and I’m happy to swallow the extra out in order to see the pitcher reach base. A position player reaching base is routine; a pitcher reaching base is cause for celebration.

Is that a rational argument for putting pitchers through the admittedly trivial risk of playing offense? No. It’s an aesthetic one. But look around. Alex Torres is the only pitcher willing to wear the Natalie Portman–in–Garden State padded hat on the mound. We allow ice hockey players to fight, and to wear less than a full face mask. We allow tackle football. Each of those represents a greater compromise of player safety in the name of aesthetics.

Baseball is, perhaps, unique among the major team sports in that there is an optimal way to play the game, and that we know what it is. It’s the side effect of the game being so quantifiable and having so few moving parts. In football, particularly college football, you can win with the Air Raid offense or with the triple option. In basketball, you can win with the Grinnell offense or the pack-line defense. There are different tactical roads to success. In baseball, pitchers have to generate swings and misses, and the defense has to position itself where the ball is likely to be hit, then run like hell when it is. Hitters have to avoid making outs and try to hit the ball as hard as they can. There’s not much of a tactical difference between last year’s throwback Royals and the Moneyball A’s — they were both trying to accomplish the same things, but they had different strengths.

Because we know optimal tactics, optimality has become a kind of goal in and of itself. The most effective strategy isn’t always the most entertaining, and valuing optimality over all else is an aesthetic choice. There’s an argument for the DH in that it makes it less risky for a team to sign an older player at the left end of the defensive spectrum, because he can DH later in his career. Why is that a rational good? Why is Billy Butler, from a rational standpoint, a player we should like to watch more than Ben Revere? I like to watch younger players who can run and don’t strike out much and play good defense. That’s an aesthetic choice, but so is liking players who don’t do those things. And in a zero-sum enterprise with little impact on the real world, an enterprise whose primary goal is to elicit aesthetic and emotional responses from those who consume it, valuing optimality above all else is an aesthetic choice too.

From an aesthetic standpoint, I love college baseball. I love it because it’s suboptimal: Pitchers don’t throw as hard, batters don’t hit the ball as far, the defense is absolutely terrible, and managers call for far too many bunts. And college teams use the DH.

But the bad defense allows for a little bit of unpredictability. Not every ground ball is fielded cleanly. Not every popup is routine. You never know what you’re going to get. The lower quality of play allows different kinds of players to exist, players you’d never see in the majors. Players like Thomas Eshelman, the ultimate control pitcher, whose stuff probably wouldn’t let him pound the strike zone the way he does if he pitched in the pros. Or Kade Scivicque, a catcher who’s hitting .380/.415/.567. Or Nick Sinay, a tiny center fielder with unbelievable speed, a pedestrian hit tool, and absolutely no power, who has a .488 OBP because he’s mastered the push bunt and gets hit by more than three times as many pitches, per game, as anyone in major league history.

I like college baseball because I like the flawed and the extraordinary over the perfect and the routine. That’s an aesthetic, irrational choice, but because baseball is a form of entertainment, so is the converse.

And if you think I’m crazy for liking all of this stuff, that’s fine. I might be. My opinion of the DH is almost certainly the result of growing up in a National League media market before MLB.TV, so DH-free ball was all I ever knew as a kid. But if you feel differently, there’s a league for you. I don’t mind that the two leagues are different. In fact, I wish they were more so — that we still had no interleague play, and more restrictive rules on trades and waiver claims between the two leagues. Walling off one league from another creates divergent evolutionary paths, allows us to peek into an alternative timeline. We get this in sports where difference in culture dictates a different style of play. To a certain extent this is true in baseball — the Japanese play baseball differently than Americans do. But it’s not as extreme as in other sports. We see the difference during international hockey, on the big ice with no trapezoid, and basketball, where goaltending rules are different and they call traveling.

Not only do divergent evolutionary paths allow us each to choose a form of the game that suits our individual preferences, but when those paths cross back over once again, the results can be revolutionary. When Fred Shero brought Soviet passing tactics to the NHL, when Mike D’Antoni brought European offensive concepts to the NBA, when the shotgun spread came to the NFL — all of those moments revolutionized their respective sports. Would walling off one league from the other have similar results in baseball? We’ll never know.

All of these are aesthetic arguments — or rather, they would be if I expected them to persuade anyone. We all have our irrational commitments, biases, and traditions that we cling to with religious fervor. But what we want out of baseball isn’t, and shouldn’t be, entirely rational. I don’t want the DH to spread to the National League because I like watching pitchers hit, and so do millions of other baseball fans. And while that’s an aesthetic taste, there’s no rational reason for it to change.