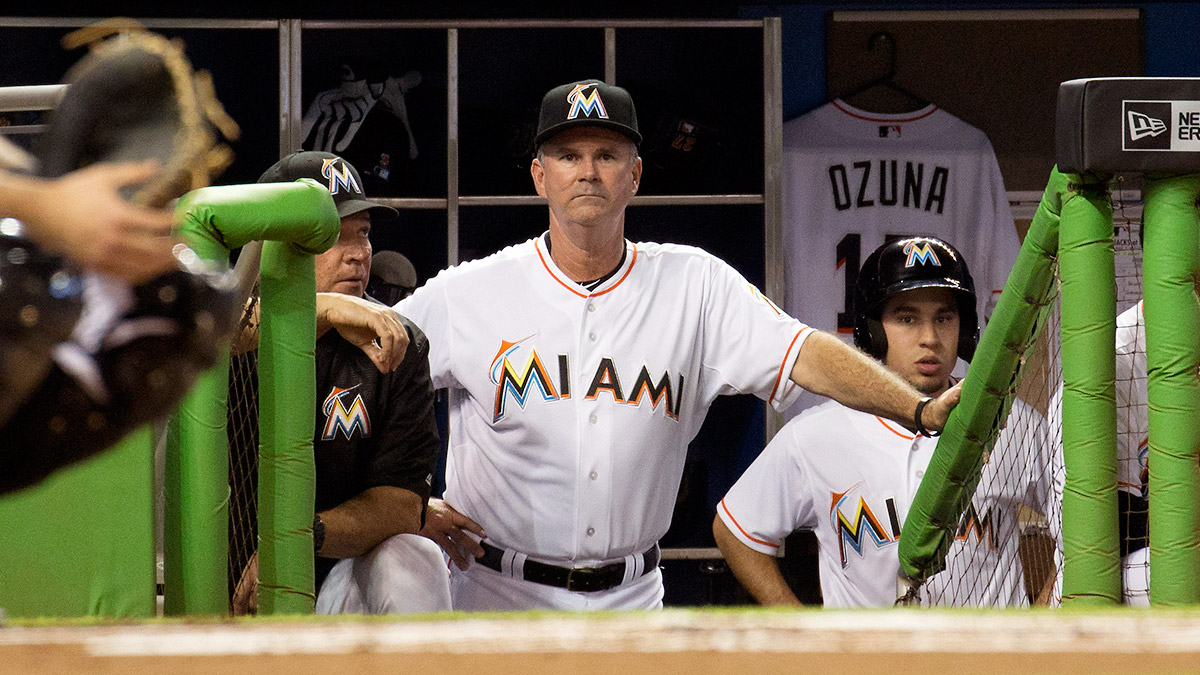 Among the 30 cabals of oligarchs who sit in charge of Major League Baseball’s various franchises, like dogs on piles of clean laundry, Miami’s front office probably isn’t the worst equipped to win. But it might be the most bizarre.

When I picked the Marlins to win the World Series this year, I knew that the wretches who work in the shadow of the Idol to the Dinger Gods would have to navigate the weirdness that comes with being chorus members in owner Jeffrey Loria and president David Samson’s community theater adaptation of the music video for “Frontier Psychiatrist.”

The latest chapter of weirdness involves firing manager Mike Redmond and moving general manager Dan Jennings into Redmond’s role, a personnel move the likes of which we haven’t seen in a generation. In one hell of an initiation, Jennings strapped on a big league uniform for the first time in last night’s agonizing 13-inning loss to Arizona, and a day later, the baseball world is still scratching its collective head.

I’m sympathetic to some arguments in favor of hiring, or rather, reassigning Jennings, who’s been part of the Marlins’ front office for nearly 13 years. The first is that the money line about his inexperience as someone who’d only ever managed a high school team also applied to Walt Weiss when the Rockies hired him to manage in 2012. Weiss hasn’t found much success in Colorado, though Earl Weaver probably couldn’t win with this Rockies roster. Other managers, like Mike Matheny, have done better with little managerial experience and more talented rosters, so the experience itself might be less important than the quality of the man and the quality of the players he commands. At any rate, we’ve seen several ex-players, including Craig Counsell, whom the Brewers hired last month, ascend to the manager’s role with little or no coaching experience.

Of course, Jennings has also raised eyebrows for his lack of playing experience — some college and a preseason trial for the Yankees’ Class-A team — but he doesn’t have a whole lot less professional playing mileage than, say, Joe Maddon, who never made it past A-ball. And besides, nothing about being a field manager requires having been good at baseball in the past; being able to relate to one’s players is probably a plus, but they let you work at NASA even if you haven’t been to space.

That said, being able to find outliers who share one or two of the several characteristics that would ordinarily disqualify Jennings for this job isn’t really a compelling reason for him to be the Marlins’ manager.

Even if you buy the idea that Loria didn’t want to go hire someone from outside the organization — a sentiment that gets ickier and tougher to believe the more times you remind yourself that Marlins Stadium will cost taxpayers $2.4 billion — third base coach Brett Butler, who’s been in that dugout for more than a year and has extensive minor league managerial experience, would have been the most qualified internal candidate.

What’s more, Jennings represents the second naked runaround of MLB’s minority hiring practices in as many managerial searches, following the Brewers’ recent decision to replace Ron Roenicke with Counsell. That’s not to say that the Marlins — who, to their credit, have a black Cuban American president of baseball ops and have had three Latino mangers in the past six years — needed to hire someone other than a white guy. The purpose of the so-called Selig Rule, as Jack Moore explained at Vice, isn’t to enforce quotas, but to create opportunities for nonwhite candidates to become connected to the kind of professional networks that could one day result in a person of color being the reflex choice for a managerial or GM vacancy. Ignoring the rule would be less annoying, by the way, if Major League Baseball didn’t hold itself up so gleefully as the institution that solved racism back in 1947. On April 15, MLB put on its annual ostentatious daylong celebration of how great it was for letting Jackie Robinson play, and in the 34 days since, there have been more (according to industry consensus) unqualified white men hired to manage MLB teams than there are black managers total.

It speaks volumes about the absolute clown-shoes nature of the Jennings decision that the Selig Rule issue isn’t even the worst thing about it. If the Marlins, who spent the offseason making the kind of moves a team makes when it wants to contend, thought the club was in a bad enough spot to warrant firing the manager, they’re likely going to have to make some tough player personnel decisions as well. And that means that this is a good time to have a GM in place.

Moving Jennings to the dugout makes the Marlins weaker in two key spots, and even if he’s supposed to straddle the line and be the front office’s envoy to the clubhouse, this is a weird time to try out that approach. Over in the NBA, we just saw the Los Angeles Clippers completely undone by Doc Rivers having built his team the way a sports radio caller might, and while the NBA has its own complexities and challenges, its 15-man active roster, two-round draft, and one-level minor league system present a fraction of the sheer number of players and staff a baseball GM has to keep track of. Loria and Samson are either ignorant of these difficulties, or they saw Hedo Turkoglu getting minutes in a conference semifinal in 2015 and thought, Yeah, we ought to get ourselves one of those.

And that’s the real problem with what the Marlins are doing: It doesn’t look like they thought at all. This was obvious to the thousands of analysts and fans who were shocked by the move, not least among them Jennings’s own mother. This decision wasn’t the result of careful consideration and deliberation; it was, to quote Samson, the result of an “epiphany.”

In an increasingly intellectual and scientific business, government by epiphany sure is a bold strategy.

If nothing else, the Marlins’ gleeful flight by the seat of their collective pants gave Mark Mulder a chance to drop a phenomenal bon mot.

#Marlins president said "this happened organically". I guess it's true, if you throw the word organic on anything people will buy it.

According to Ken Rosenthal, Jennings himself might not even think this is a good idea, and is doing this primarily out of loyalty to Loria. And when we consider that motivation, then zoom back and look at Loria’s entire CV as owner of the Marlins, this move starts to make more sense. What would this bad guy from an Adam Sandler movie of a major league owner, whose conduct has been as unpopular and destructive as it’s been cynical and amoral, value more than competence? Loyalty.

Sometimes the unexpected and unconventional work out. But poor Dan Jennings, who’s going to wind up as the face of the most foolish front-office shakeup in recent major league history, isn’t the new market inefficiency. This is less innovative than irresponsible. Less unconventional than half-cocked. Jeffrey Loria has salted his fields before, but this time, it’s about ego, not greed. And more importantly, this time he didn’t give his team a chance to win something first.

'The Jonah Keri Podcast': Twins Reliever Glen Perkins on Life As a Closer