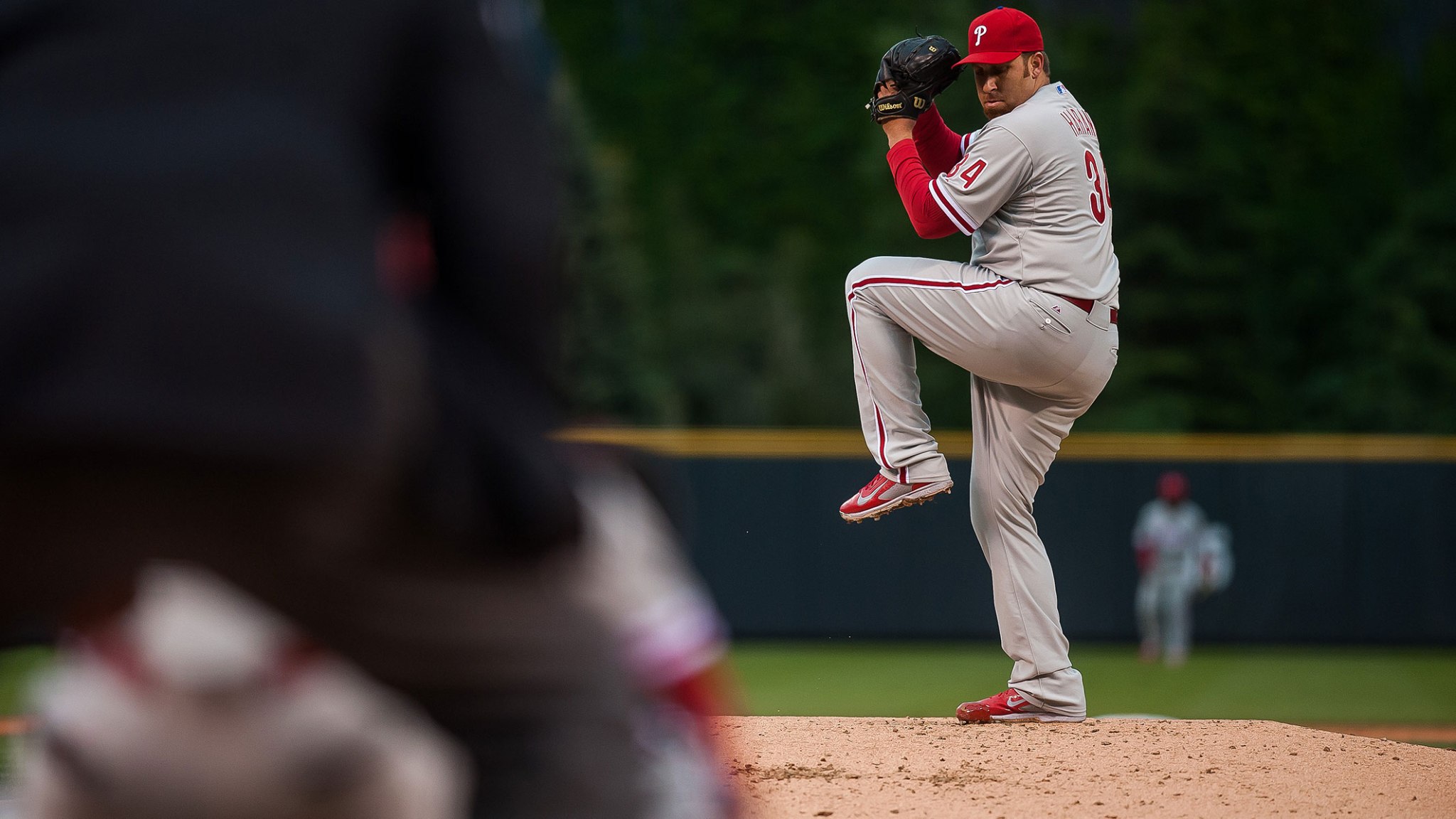 The National League ERA leaderboard features a few surprises — Shelby Miller has been a terror since refining his repertoire, A.J. Burnett’s been both great and buoyed by a shift-friendly defense — but neither one matches the shock of seeing the guy who’s fifth on the list. Yes, right behind Zack Greinke and Max Scherzer, it’s 37-year-old Aaron Harang and his 1.82 ERA.

Now in his 14th season, Harang has seen it all in the big leagues. He’s played alongside Hall of Famers like Barry Larkin, taken the mound for unforgettable teams like the 2002 A’s, and pitched for a total of eight different clubs.1 Yet somehow, he’s found his greatest success this season, playing for a fourth-place Phillies squad that’s also the worst defensive team in the majors by a mile.2

All of that raises a question: What the hell is going on?

The immediate answer is that he’s got a new pitch. According to Brooks Baseball, Harang didn’t start throwing a cutter until last year, but now he fires it once out of every nine pitches. It hasn’t been close to his best pitch this season — opponents are batting .280 against it in 2015, the second-highest mark in his six-pitch repertoire — but Harang says it’s all about the uncertainty his new offering creates and not necessarily the immediate results the cutter produces.

“Now when the ball comes out of my hand, they don’t know if it’s going to ride, sink, or cut in on their hands,” Harang said. “The more you can make the hitter think about it, the better.”

At an early age, the San Diego–born Harang learned that pitching is about more than just throwing a ball. His father, a local high school coach, was an eager teacher, but Harang received something very different than the instruction you might expect for a future major leaguer. Rather than push his son to keep throwing, Harang’s dad made sure Aaron’s arm wasn’t being overworked. If a Little League coach tried to make Aaron throw too many pitches, Dad was there. If the coach wanted to see a curveball, Dad made sure it was a karate-chop version that could still generate movement without the big wrist pronation that can cause stress on young arms. When elite traveling teams came calling during Aaron’s teen years, Dad would be in the stands, ready to pounce on any coach who tried to tax his son’s still-vulnerable arm by making Aaron try to light up a radar gun.

Harang took those early lessons about pitching selectively and intelligently to heart. Experts like Dr. Glenn Fleisig of the American Sports Medicine Institute have argued that warm-weather kids could be at greater risk of pitching injuries because they get year-round sunshine and never have to stop playing, so rather than pitch year-round, the 6-foot-7 right-hander took up basketball in the fall. Now, it’s quite possible that Harang’s 260-pound frame and/or sheer luck have allowed him to stay healthy — no pitching injury has kept him out for more than a month — but Harang credits all those years of pitching moderation for his longevity, too.

“Even now, when the season ends, I don’t do anything at all for at least a couple of weeks,” Harang said. “And I won’t pick up a ball until around mid-December.”

The first step of Harang’s long journey through pro baseball came in 1999, when the Texas Rangers drafted the San Diego State product with a sixth-round pick. Despite some promising low-minors numbers, the Rangers soon shipped him to Oakland in a three-player deal that included Randy Velarde. Harang made his major league debut for the A’s in 2002 and soon became the eventual fifth starter behind the holy trinity of Tim Hudson, Mark Mulder, and Barry Zito. This was the Oakland squad that shook off the loss of veteran stars Jason Giambi, Johnny Damon, and Jason Isringhausen to win 103 games and the AL West title, inspiring a book and movie you might’ve heard of in the process.

“That was just crazy,” Harang said. “We would be down four or five runs, and just kept coming back. Then, to be in the middle of that [20-game] winning streak was just incredible. It just seemed to be a different guy doing it for us every night.”

The following year, Harang was dealt to Cincinnati at the trade deadline as part of a four-player move for Jose Guillen. That Reds team was rebuilding, and joining a 69-win club gave Harang a chance to become a more prominent member of the rotation than he was in Oakland. By 2005, he was striking out more than three batters for every one walk and logging 211.2 innings in a season. In 2006, Harang led the National League in wins, starts, batters faced, complete games, and strikeouts. In 2007, he finished fourth in Cy Young voting, going 16-6 with flashy advanced stats to back him up.

Those were the glory years, but as Harang entered his 30s, his fastball began to lose some zip, and his results started to slip. He joined his hometown San Diego Padres after the 2010 season, but it didn’t last, and Harang began a stint where he played for four different teams over a three-year span. After finishing the 2013 campaign with a 5.40 ERA, at 35, you might’ve figured that his career was done — but that long-term health continued to pay off.

When the Braves suffered two major, late-spring pitching injuries in 2014, most able-bodied pitchers were already spoken for, so they reached out to Harang and offered him a scant one-year, $1 million contract. Making 33 starts and posting a 3.57 ERA that was better than league average, Harang paid the Braves back and then some. The biggest change in his results was a greatly reduced home-run rate: He allowed 26 bombs in 143.1 innings in 2013, but just 15 in 204.1 frames last year. That newfound long-ball stinginess earned him another one-year deal, this time with Philly for five times the dollar amount.

This year, he’s walking fewer than two batters per nine innings, a career-low mark. He has given up hits on just 25.1 percent of balls in play, also the lowest mark of his career and 53 points below his career number, and a number likely to regress toward the mean. But what really stands out is Harang continuing last year’s low-homer success, and building on it: He has ceded just two round-trippers in 59.1 innings, the second-lowest home-run rate for any NL starter.

Harang isn’t a numbers zealot by any means, but he knows full well that a 2.6 percent home run per fly ball rate isn’t usually sustainable for human beings not named Mariano Rivera. On the other hand, he also believes in that diverse and befuddling repertoire he’s taken 30 years to hone. Harang is labeled as a fly-ball pitcher, but he says much of that comes from his intentional attempts to induce weak contact, which is how you get one of the highest infield pop-out rates in the league, and less hard contact than at any point in 12 years.

I mention to Harang that his 2015 looks suspiciously like the 2014 season turned in by Chris Young, another ultra-tall right-hander who lacks overwhelming stuff, strikes out fewer batters than league average, and keeps getting hitters out by making them hit the ball into the air. Harang smiles: “C.Y.’s my offseason training partner. Sounds about right.”

Last year, the Phillies signed veteran right-hander Roberto Hernandez and then flipped him for prospects in August. Harang is pitching significantly better this year than Hernandez did in 2014, so don’t be surprised if much-maligned Phillies GM Ruben Amaro cashes in on Harang’s unlikely success too.

In the meantime, the battle of pitching guile vs. Father Time continues apace. Harang says his fastball is probably about average velocity by today’s lightning-fast standards. When I suggest that a 90-mph fastball rate is decidedly below average, Harang smiles again.

“Good! That just gives me another opportunity to look different to hitters,” he said. “I know I can dial it up to 93 or drop it down to 86. You learn which pitches to pair with other pitches, in which counts, against which hitters. You can learn a lot if you do this for long enough.”