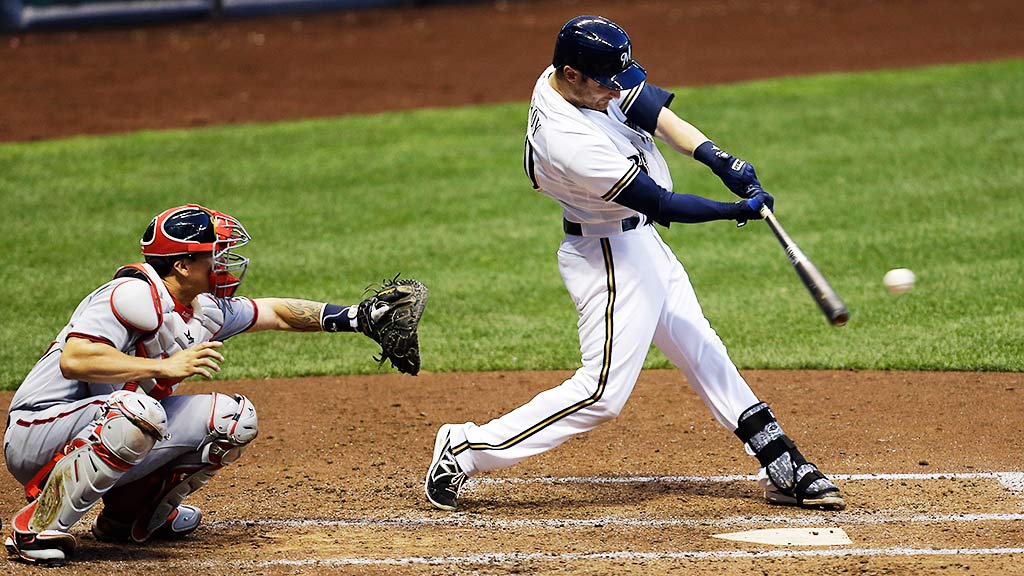 Some star players take off immediately. Others gradually improve over time. Milwaukee catcher Jonathan Lucroy hasn’t done either; he’s riding a multi-stage rocket to the moon.

I can only imagine what it’s like to be a Brewers fan, watching that career trajectory unfold. Lucroy was a third-round pick out of Louisiana-Lafayette, but he was never a top-100 prospect or a projected future star. When he came up in 2010, he was a decent platoon alternative to George Kottaras, which is fine. When he took over full-time catching duties in 2011, he hit .265/.313/.391, which wasn’t great, but also wasn’t a bad return on a then 25-year-old, cost-controlled player who could already handle the game’s hardest position competently. Plus, that 2011 team had Ryan Braun, Prince Fielder, Rickie Weeks, and Corey Hart; other people could handle the hitting.

Near the end of that season, Baseball Prospectus’s Mike Fast released an article on how a catcher’s receiving skills could impact the way an umpire called balls and strikes. Far from being a marginal skill, good pitch framing proved to be something that could make a catcher worth a few dozen runs per year, and Lucroy quickly emerged as one of the best framers in the game.

That was pretty cool, particularly when Lucroy started hitting: In 2012 and 2013, he combined to hit .295/.350/.477 in 926 plate appearances. He gained national attention as a member of Team USA in the 2013 World Baseball Classic, and he became something of an indie darling in fantasy baseball circles, well known by all but particularly beloved by fans for whom Buster Posey was just too mainstream. He became Anna Kendrick in a facemask and shin guards.

Now, at age 28, Lucroy is suddenly mounting a campaign of conquest and destruction in the National League. He’s been by far the best player on a team that includes the guy who won the MVP three years ago (Braun) and a guy who could have won the MVP last year (Carlos Gomez).

Watching Lucroy’s evolution from platoon guy to competent starter to good player with a cool skill to whatever Lucroy is now must be dizzying for Brewers fans. It’s like walking along the beach with a metal detector and finding a set of keys, then discovering that those keys go to a Maserati that has a lamp in the glove box with a genie inside who insists on granting you three wishes.

Lucroy is currently hitting .334/.403/.515 with an NL-leading 28 doubles. His 156 wRC+ would be third among major league first basemen, fourth among corner outfielders, and second among DHs. Only he’s a catcher, and a very good defensive catcher to boot. That makes it harder for Lucroy to stack up counting numbers, since catchers only play about 80 percent as much as other position players do. It’s also not hard to argue that it’s harder for a player to hit if he’s squatting a couple hundred times a game and taking foul balls off the mask, as Lucroy does, than if he’s spending defensive innings freeloading, as, say, David Ortiz does. And Lucroy once again sits near the top of the pitch framing leaderboard, currently in a practical dead heat with Miguel Montero with a little more than 16 runs saved above average.

So to recap: Lucroy plays the toughest position in baseball as well as anyone, and despite that, he ranks among the league leaders at all positions in offensive production. Among the top 30 hitters in baseball in wRC+, only Lucroy, Gomez, Troy Tulowitzki, Mike Trout, and maybe Andrew McCutchen (whose reputation as a defender has always been polarized) combine that kind of two-way production at an up-the-middle spot. Right now, I’d still have Tulo ahead of Lucroy on my theoretical MVP ballot, but that gap is getting smaller every week.

Not too long ago, the Brewers released a video for Lucroy’s All-Star campaign in the style of a political ad pitting Lucroy against Yadier Molina.

It was funny and playful, and it calls attention to the great season Lucroy is having. I love everything about it, including how offended St. Louis manager Mike Matheny and various Cardinal fans got. Lucroy inspired something that was decried as classless by the Best Fans in Baseball and greeted with multiple paragraphs of “Gee, I dunno” from Mike Matheny, in which he literally used the phrase “Cardinal Way.” That’s how I know Lucroy is bringing joy and happiness to the world.