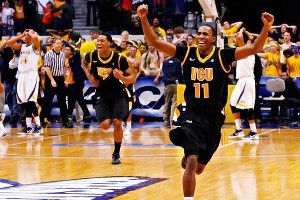 Before we begin, can we take a moment to recognize the greatness of last night’s championship games? You had Saint Mary’s sneaking by the Zags in what’s become the best rivalry in the west, Loyola taking down Fairfield in a fourth-wheel type game that became pretty compelling, Davidson using double OT to beat DIKEMBE MUTOMBO’S NEPHEW!!! (and Western North Carolina), and VCU ending Drexel’s 19-game winning streak with stellar defense and a heroic second-half stand to make the Dance.

That was Monday of Championship Week, mind you. A mere appetizer of what’s to come. God, I love this time of year. If I could find a way to capture the endorphins and serotonin from March and take it slow-drip style over the rest of the year, I’d be in a permanent blissful daze. Instead, I spend one month in hyper-bliss, a dangerous and wonderful state where only the true college basketball fan may exist. Join me, my brothers and sisters! We dance ’til April!

So, for today’s mid-major primer, I had to decide among last night’s four victors. I already covered Saint Mary’s, Michael Kruse did Davidson, and Loyola, bless their hearts, will probably not make much of a dent come the Madness. Boom, easy choice. Let’s find out more about these Rams, Q&A style.

Q: Geography: Where is VCU? Is it some kind of school for Violent Children? Is it safe to let them play in the tournament?
A: No. You’re thinking of VCC, and they play in D-II. VCU is Virginia Commonwealth, located in Richmond, Virginia.

It sounds like a private school, but keep in mind that Virginia is one of four states in the U.S. designated as “commonwealths” (Kentucky, Pennsylvania, and Massachusetts are the others), so “Virginia Commonwealth” is essentially the same thing as “Virginia State.”

I know what you’re thinking — why isn’t Penn State “Penn Commonwealth”? No idea, but they might want to consider it for rebranding purposes at this point, am I right?

Q: This is the crew with Shaka Smart that made the Final Four last year, right?
A: You got it. I used to think Shaka Smart was the coolest coaching name in the business (he was named after the Zulu warrior), until I came across the name of Drexel’s coach last night:

Are you serious? Are you even serious, world? That is the most egregiously fantastic thing since humans invented names. The impact of a name like that cannot be measured. I went to bed last night, thought the words “Bruiser Flint” to myself, and woke up with my ass kicked. I got pulled over for running a red light earlier this morning, said “Bruiser Flint” to the cop at my window, and he paid me the $300 fine. That’s how real Bruiser Flint is.

But anyway, Shaka Smart is the second-hottest young coach in the game, after Butler’s mega-hot Brad Stevens (remind me to use a different word than “hot” next time), and the only one of the two who will have his team in the Big Dance this season. This is his third year with the Rams. In 2010, he led them to the championship of the CBI, which is the only college basketball tournament held in a third-world country (rotating schedule, in Yugoslavia this year). Last year, of course, they made the excellent Final Four run, beating Kansas in the Elite Eight before losing to Butler.

He inherited a strong program from Anthony Grant (whose 2007 VCU team upset Duke in the first round) and Jeff Capel, but he’s brought the Rams to new heights.

Q: What’s the hallmark of this VCU team?
A: If you watched last night’s win over Drexel, you already know the answer: frantic, swarming defense.

Guard Darius Theus came away with five steals to go along with 16 points and five assists, and his performance was par for the course. In fact, VCU leads the nation in defensive turnover percentage and steal percentage. One of the Ram reserves, freshman Briante Weber is tops in the country in individual steal percentage. They love to hassle and harass opponents, employing a full-court press and a smothering perimeter defense. We saw how that played in last year’s tournament, and the ’11 Rams weren’t nearly as aggressive as this year’s group.

Playing in front of a home crowd last night, VCU managed to run up a 16-point lead on Drexel, which proved to be enough, barely, to hold them at bay in the second half. With such a ferocious defense, those types of runs come frequently for the Rams. On the other hand, they’re not a great shooting team (235th in effective field goal percentage in D-I, and 260th from inside the arc), so when the turnovers aren’t happening, as we saw in the second half, things can swing in the other direction. Very early in the season, they played two strong defensive teams in Seton Hall and Alabama, and lost both games.

The Rams are also prone to conceding offensive boards, a tendency that plagued them in three losses this season and could be especially damaging in the tournament. At the same time, last year’s team was 321st in defensive rebounding percentage, and it didn’t hurt them. When the steals and turnovers are coming, Smart and the Rams will gladly sacrifice a few second chances.

Q: Who else should we look out for besides Theus?
A: Bradford Burgess is the lone senior on a team that lost four of them last year, and he’s the leading scorer with 13.3 per game. At 6-foot-6, he’s a combo guard who also grabs 4.9 boards per game and shoots 3s at a 36.6 percent mark.

Juvonte Reddic is one of two true big men in the starting five, averaging 10.6 points and 6.8 boards. Obviously, if he gets in foul trouble, the situation starts to look bleak for VCU. They have some back-up underneath with 7-foot sophomore D.J. Haley, but while Haley starts (this is a flagrant guess, but I bet Smart has him in at the beginning mostly for the tip-off), he rarely plays even 20 minutes.

Then there’s Troy Daniels, the 6-foot-4 junior who qualifies as the team’s sharpshooter. He hits 38.5 percent from deep, and 84.3 percent from the line, while averaging 10 points per game and contributing 1.2 steals. Finally, 6-foot-2 sophomore Rob Brandenberg comes off the bench but plays most of the game, averaging nine points and one steal per game.

Q: Can VCU make another run deep into the tournament?
A: It’s so tricky with this crew, because they can get hot and cold in a hurry. We saw both sides of the coin last night; after roaring out to a 35-19 at the half, the Rams managed just 10 points in 11 minutes to start the second half. You have to think that if Drexel hadn’t had such a disastrous beginning, and if the game didn’t take place in Richmond, it would have come out on top. VCU won’t be able to afford those lapses at a neutral site, so my advice is to be cautious before you pick them to make the second weekend. So much will depend on the matchup. Against a team who can crash the offensive glass and avoid turnovers, they could be in trouble.

Q: Would VCU-Wisconsin be the most fascinating first-round game of the tournament?
A: Yes. God, yes. Ram versus the Badger is the new good versus evil. Or something.

Q: Won’t the implacable Bruiser Flint be out for revenge after last night’s loss?
A: Oh man, I didn’t even think of that. Shutter your windows. Don’t speak the name VCU, or he’ll know. HE’LL KNOW! It’s already too late for me … I … I can see him in my parking lot … oh mercy … save yourselves. Pick against VCU! And my buried treasure is in the apartment building across from —

From the Grantland Archives: Bill Barnwell on Peyton Manning