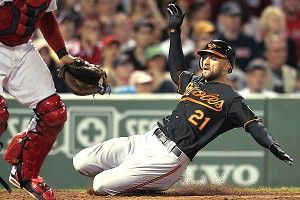 Dan Duquette doesn’t deserve the bum rap he gets in some baseball circles. Anyone who pulls off not one, but two heists of Pedro Martinez deserves acclaim. Moreover, Duquette oversaw many of the young players who formed the core of that could-have-been-historic 1994 Expos club, and also made multiple shrewd non-Pedro deals in Montreal. Yes, he was the guy who came before Theo Epstein broke Boston’s 86-year futility streak. But Duquette found gold on the scrap heap numerous times, and did a good job at different times of identifying good, young talent. Plus, you know, Pedro. Still, Duquette acknowledged that a decade away from Major League Baseball proved a challenge when he had to jump back in.

The challenge now is to convince his boss to be patient while Duquette, scouting director Gary Rajsich, and the rest of Baltimore’s brass tries to upgrade the farm system and shove the O’s back toward contention. Few owners have shown an itchier trigger finger than Peter Angelos in firing GMs, managers, and other key staff. Perhaps that’s inevitable after a once-model franchise spirals into a decade-and-a-half of disaster. But you can’t make chicken salad out of Oriole poop. Whether it’s Duquette, or the next guy, or the guy after that … someone will need some real time and latitude to make this turnaround work, especially in baseball’s (perennially) toughest division.

Time to find out what the Orioles have here. Can Markakis approach the .389 wOBA he posted four years ago — or was that a career year for an otherwise merely average outfielder? Will Jones fulfill his potential in this, the year he turns 27 — or is a player with a career walk rate below 5 percent doomed to a career of offensive mediocrity? Can Wieters take the next step toward superstardom — or will the Orioles have to settle for a five-win player as their best guy? Can Endy Chavez shock the world and hit .301 again — or will he return to his customary role, picking up his teammates’ dry cleaning?

Seriously, as much as people bitch and moan about the Orioles’ pitching woes, this team needs a serious influx of young position-player talent too. Top shortstop prospect Manny Machado can’t get here soon enough (despite Hardy being one of the Orioles’ best players).

As if the Orioles haven’t had enough trouble keeping their pitchers healthy and productive, they’ve also decided to make matters much worse by fielding one of the most atrocious team defenses in baseball. Mark Reynolds hit 37 homers last year and was still somehow a replacement-level player; that’s a pretty good sign he should never ever ever ever play the field, unless your team’s goal is to tank every season and try to hoard high draft picks. At any rate, Chen and Wada offer fairly low-cost and low-risk options while the O’s pray for Britton and wait for Dylan Bundy to save the day four or five or six years from now. If Baseball Prospectus or someone else revives a game where lousy performances x ample playing time = great success, Arrieta could be a sweet first-round pick.

BREAKOUT PICK
Wieters. The 2007 first-round pick enters his fourth major league season coming off career highs in virtually every offensive category. History tells us that a pullback is the most likely outcome after that kind of breakout. But there may well be more to come. Wieters has slashed his strikeout rate to 15.2 percent last year from 22.3 percent in his rookie season; yet he hit just .262 in 2011, thanks partly to a below-average .276 batting average on balls in play. He hiked his line-drive rate from 2010 levels and also posted a career-best .188 isolated slugging (slugging percentage minus batting average). When Wieters broke in, the line on him was: possible 30-homer hitter. This might be the year he fulfills that promise.

IF EVERYTHING BREAKS RIGHT
Their pitchers stop getting hurt. Seriously, you could argue that no team in baseball has worse odds to make the playoffs than the O’s. What matters now is making sure Britton’s minor spring training stays minor, and that other young arms in the organization don’t suffer the kinds of setbacks (mostly in health, though also in performance) that have derailed the development paths of Chris Tillman, Brian Matusz, and others. Asked in The Extra 2% how to overcome the huge advantages held by the Yankees and Red Sox, former Orioles GM Andy MacPhail said elite free-agent starting pitchers never come to AL East teams who aren’t New York or Boston, making it mandatory for rivals to build their own formidable pitching staffs. Simply managing a season without setbacks would be the Orioles’ biggest move in that direction in years.

IF EVERYTHING GOES WRONG
Kinda tough for things to go worse than a 14-year streak without so much as a .500 season, no? How about another lost season leading to a mid-season Adam Jones trade, followed by the players acquired in that deal turning into the Ghost of Fernando Lunar?