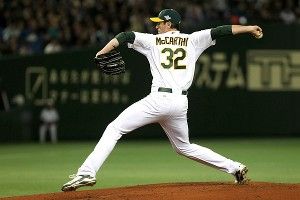 They might not win much, might not score many runs, might not get much national attention. But the Oakland A’s are going to be interesting this year. For that, they can thank Yoenis Cespedes.

Stick your small sample sizes in your ear: In the seven plate appearances of his major league career, Cespedes whacked a 390-foot double on a pitch at his shins, crushed a long homer to left-center (granted, on a big, fat, hanging slider from crappy reliever Shawn Kelley) and waved at approximately eleventy pitches in the dirt (granted, most of those while facing Felix Hernandez). The subject of the most incredible training video ever made (yes, we’re going to keep posting and re-posting this thing until every man, woman, and child in the galaxy has watched it) is physically gifted, incredibly raw, and being given free rein by the A’s to let Yoenis be Yoenis. On a team where the current 3-4-5 hitters are the legendary Coco Crisp, Seth Smith, and Kurt Suzuki, Cespedes is a delightful wild card who could become the only true star on an otherwise anonymous team, or a spectacular failure. Either way, he’s worth watching.

Say this for the A’s: They’re not afraid to make changes. Smith, Reddick, Allen, Sogard, and of course Cespedes are all new faces in the lineup. In the case of third base, this was a function of injury rather than design. But you’d still rather see a rebuilding team see what young guys like Sogard and Josh Donaldson can do than, say, give Juan Uribe more money than you or I will ever make if we live 900 lifetimes.

The deep sleeper here is Allen. Maybe it’s just the usual obsessive stumping you get from statheads and their pet causes, but Allen has shown impressive power at multiple minor league stops, some of them hitter’s havens, some of them not. Yet no team has been willing to grant Allen an extended look at regular playing time, until now. Entering his age-26 season, the conditions could be ripe for some unexpected production. Again, when you’re unlikely to contend, better to see what the young guys can do than to waste money and playing time on known mediocrities.

Games against the anemic Mariners probably shouldn’t count, so it might be a while before we know if McCarthy can replicate his excellent opening game performance or if Bartolo Colon’s good for eight dominant innings a bunch more times. But this staff might yet have some upside, even after the offseason trades of Trevor Cahill and Gio Gonzalez: McCarthy remains underrated even after leading the AL in FIP last year; Colon’s amazing comeback was well-documented last year; projection systems like Tommy Milone’s microscopic walk rates; and Jarrod Parker, while not officially the fifth starter yet, is the best candidate to win the job and one of the most highly regarded pitching prospects in the game.

The bullpen’s something of a question mark with relief ace Andrew Bailey gone and several new faces cycling in, though Fautino De Los Santos could be dominant if he can show improved command to go with his big strikeout rates. Ditto for the defense, which already ranked among baseball’s worst last year and lost ace defenders David DeJesus (over the offseason) and Mark Ellis (last summer). Cespedes has the tools to run down balls in the gap and gun down base runners, it’ll just be a question of whether he can turn those tools into plus defensive skills.

BREAKOUT PICK
Cespedes. There’s probably some law against making someone who’s both an established star in Cuba and a major league rookie a breakout pick. Consider that law broken. Watch out for Parker, too: He could be the team’s second-best pitcher by Memorial Day.

IF EVERYTHING BREAKS RIGHT
Big years for rookies Cespedes, Parker, and Brad Peacock, a successful Suzuki trade opens the door for Derek Norris to become a poor man’s Mickey Tettleton, continued strides for Weeks and McCarthy, and a lot more good vibes than you’d expect from a team that’s a long shot to finish above .500, let alone battle elite division mates Texas and L.A.

IF EVERYTHING GOES WRONG
The A’s plan to move to San Jose gets pushed back further, pushing their supposed window for contention back even more and triggering another set of go-for-it-in-four-years trades. There’s logic to picking a timeline and trying to build a team to contend once you’ve reached the logical point in that timeline to do so. But at a certain point, wait till next year (or maybe even wait till 2015) starts to get a little depressing.

This Is Where We Get You Addicted to MLB Prop Bets