Break Up the Fish! 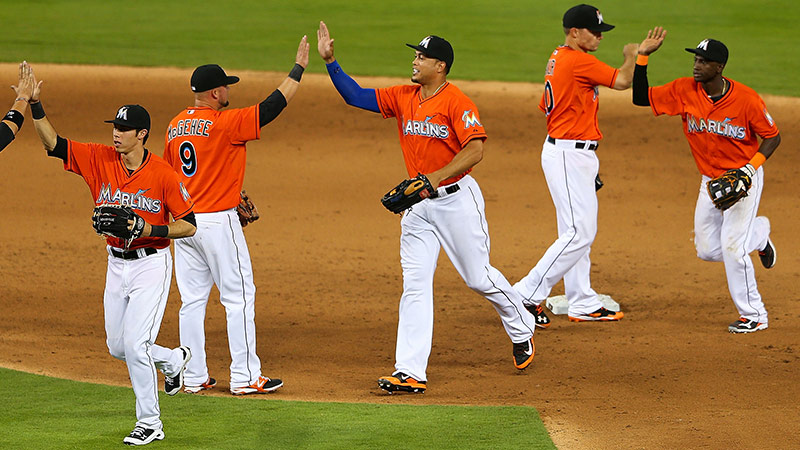 I take it all back: all the 2012 snarking about the ridiculous uniforms and the science-fiction dystopia stadium; all the 2013 hand-wringing about gutting the team to save the owner, who’s basically Rachel Phelps in Roger Ailes’s body, a few extra bucks as he scammed Miami-Dade County out of hundreds of millions; all the ridicule over batting Placido Polanco cleanup and drawing crowds so small they’d put a bad MLS team out of business. I’ll even retract the usual caveats about small sample sizes and not drawing conclusions of any kind until May.

Because I’m on the Miami Marlins bandwagon.

Taking three out of four at home against a terrible Colorado Rockies team may not be much to brag about, but when the Marlins win, they do so with panache. Consider the opener, when 21-year-old ace Jose Fernandez lazily held the Rockies to one run over six innings on 94 pitches, walking none and striking out nine. That one run came on a Carlos Gonzalez solo shot, which Gonzalez took a good long while to admire, and which Fernandez shrugged off and smiled about instead of getting all huffy over, as has become the norm when players (including Fernandez) celebrate home runs at the plate. Fernandez is great because he really knows how to pitch, but also because he understands that baseball is more fun with bat flips than without. Gonzalez doing the Barry Bonds stare isn’t going to hurt Fernandez’s feelings. Nothing is, because Fernandez is awesome, and the 10-1 win he helped author was the most lopsided game of Opening Day.

And consider the second game, in which Nathan Eovaldi failed to pitch quite as well as Fernandez, but still managed a plenty good outing, with two runs on six hits over six innings, a walk, and six strikeouts. He also duplicated Fernandez’s feat of being the hardest-throwing starting pitcher of the night: Fernandez’s average fastball velocity was 96.3 mph, while Eovaldi’s was 95.9. And though Eovaldi didn’t have Fernandez’s run support — The Mighty Giancarlo Stanton and Christian Yelich, perhaps the only two above-average hitters on the team, went a combined 0-for-7 — he still led his team to a 4-3 victory.

Even in defeat, the Marlins looked inexorable. Henderson Alvarez spotted the Rockies six runs in three-plus innings on Wednesday, but the Marlins clawed back to 6-4 to make the bottom of the ninth one of the most exciting innings of the young season. To attempt the save, Colorado brought in LaTroy Hawkins, who’s older than any three Marlins hitters put together. Adeiny Hechavarria, who’s a better hitter than you or me, but only barely (and whose name I learned to spell before Zack Greinke’s, so great is my love for this team), led off with a single.

Two batters later, Yelich, who’d be the most exciting under-25 outfielder on about 25 teams in baseball, embarked on one of those at-bats. When a prospect as hyped as Yelich reaches the majors and you start seeing him in HD every night, you notice things you missed in YouTube highlights and Keith Law top 100 mug shots. For instance, we couldn’t appreciate how thick Gerrit Cole is, or how Yordano Ventura bends his back just so until they reached the majors. With Yelich, the surprise is just how skinny he is. He’s an easy 6-foot-3, but he looks like a middle schooler who grew seven inches over summer vacation without putting on any weight and has a mom who’s mad that she has to buy him new pants every three months.

Being skinny didn’t stop Yelich from battling Hawkins — who made his major league debut when Yelich was 3 years old — for 11 pitches, one of which was a wild pitch that allowed Hechavarria to advance to second. On the 11th pitch, Yelich grounded to second, moving Hechavarria again. Derek Dietrich, whoever that is, walked to set up the confrontation we all wanted to see: The Mighty Giancarlo Stanton, with two outs in the bottom of the ninth and the tying run on first base. Hawkins was starting to tire after taking 26 pitches to record two outs, and he went away-away-away before stealing a 3-0 gimmie strike on a pitch that, well, wasn’t a strike.

In a just world, the game would’ve ended on the next pitch, which Stanton beat the shit out of. There’s not a more delicate way to say it, because when TMGS connects, he hits the ball unimaginably hard. His home runs get out quickly, go farther, and stay in the air longer than normal people’s home runs. His line drives travel faster and land deeper in the outfield than normal people’s line drives; what he does to the baseball is like what 2006-07 Ryan Howard did to the baseball. Stanton makes life dangerous for infielders.

But this 3-1 pitch went foul, and while Stanton eventually drove in Hechavarria, the rally died with Garrett Jones, as rallies are wont to do. For the third game of the season between two bad teams in a less-than-half-full ballpark, though, this was incredible drama.

In Game 4, TMGS and the Marlins were redeemed.

Once again, they spotted Colorado a lead before storming back — this time from three runs down — to get Hechavarria on base against an increasingly battered Rockies bullpen. Yelich drove in Hechavarria to tie the game, and The Mighty Giancarlo Stanton singled Yelich in to put the Marlins up for good.

Stanton wasn’t able to wave Wednesday night’s ninth-inning blast fair, because the ball was traveling too quickly for him to get his Carlton Fisk on before it landed. But if he had, the most (deservedly) ridiculed franchise in baseball would be the league’s only 4-0 team. I’m sure it’ll settle for 3-1.

Look, I don’t believe in Jeffrey Loria. I don’t believe in overreacting to four-game samples just because they come in the opening week and there’s no preceding data to water them down. I don’t believe that three players can metaphysically lift their teammates to performances ordinarily outside their modest capabilities, as it seems that Stanton, Yelich, and Fernandez are doing.

But whatever. Sports are supposed to be fun, and right now, it’s fun to believe in the Miami Marlins.

Calvin Pryor Is About to Make Receivers Disappear Completely