Calvin Pryor Is About to Make Receivers Disappear Completely 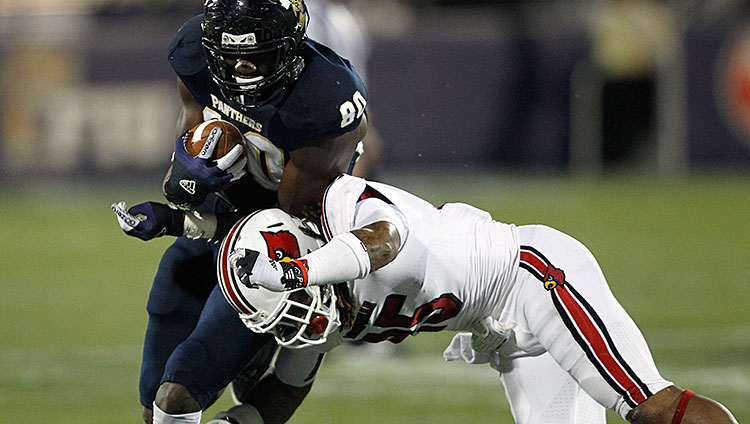 A few years ago, I heard a theory about hitting that I’ve parroted ever since. The idea was that the traits we ascribe to football’s biggest hitters — especially size and speed — are overstated. They’re necessary (force is, after all, mass times acceleration), but neither is the most important factor. See, when someone is about to deliver a hit, the natural instinct is to hold back just a tiny bit, if only for self-preservation. The best hitters aren’t the ones who get there the fastest. They’re the ones who never slow down. And Louisville’s Calvin Pryor does not slow down.

Pryor is the consensus no. 2 safety in this draft, right behind Alabama’s Ha Ha Clinton-Dix. Dix is the ground coverer, the free safety archetype with endless range that any team looking for its version of Earl Thomas could reach for as high as the top 10. Pryor isn’t that guy. He has great hands, but he carries a similar “stiff in coverage” label that a lot of in-the-box hitters have had to deal with. Pryor may not keep the back end airtight like Clinton-Dix can, but that’s not what he’s going for. He’s looking to make people disappear.

Here’s the start to the “Weaknesses” section in the CBS Sports draft evaluation of Pryor:

“Almost too physical in an era in which heavy hitters often draw penalty flags. Drops his shoulder into defenders but some of his hits could be interpreted as leading with the crown of his helmet.”

The worst thing they can say about Calvin Pryor is that he hits too hard.

It’s a legitimate concern these days. Pryor might as well get Roger Goodell’s Chase QuickPay info now. He’s going to need it.

But it’s not because he’s dirty. Most of the ridiculous hits in that clip are perfectly legal. The problem is just how violent they are, and with Pryor, I kind of love it. The goal for a lot of teams is going to be finding the next Earl Thomas, but when I watch Pryor, I can’t help but think about the hit Kam Chancellor put on Demaryius Thomas in the Super Bowl. As the league has rightly cracked down on helmet-to-helmet hits, finding a tone-setting enforcer for the middle of the field who can dole out his punishment while playing by the rules has become a major factor.

That video inspired about five different audible reactions from me. These guys — Brian Dawkins, Steve Atwater, the guys looking to turn people into smudge marks on the face of the earth — are always fun. I get the appeal of great cover safeties these days, but I also know any receiver playing against Pryor is going to be thinking about it all week. One way to keep someone from catching the ball is to make him not want it at all.

Break Up the Fish!

How to Fix the Pacers