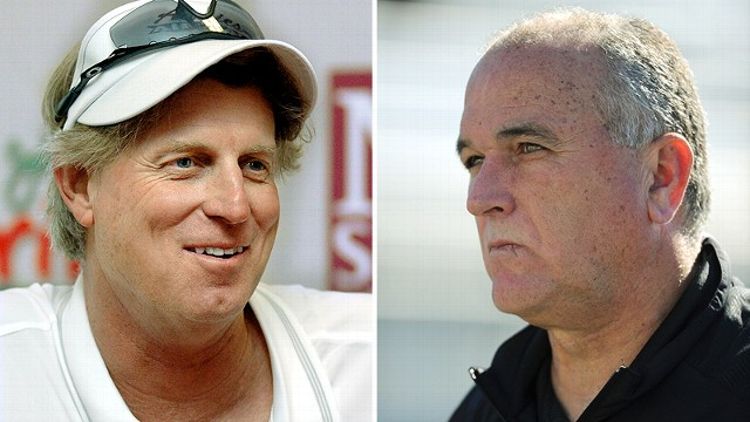 As dawn rolled in on a Saturday in August, Hal Mumme jogged toward the practice field at Southern Methodist, sweat beaded below his visor, a towel draped around his neck. He slowed his pace to nod at a couple of high school coaches by the field’s entrance, men who had traversed Texas to make sense of the fuss at SMU. After greeting some staff members, Mumme wandered around midfield as players stretched, eventually settling alongside June Jones. Aside from a red ball cap, the Mustangs’ head coach wore black from head to toe, apparently immune to the Dallas sun. The two stood there, talking and chuckling, probably deciding whether they would throw the ball 80 percent of the time this season, or if they’d strive for something more ambitious.

In March, Jones hired Mumme to coordinate the Mustangs’ passing game. Usually the appointment of a 61-year-old offensive assistant in the American Athletic Conference wouldn’t be cause to take notice, but in the middle of this practice field stood two of the more influential offensive minds of the past quarter-century — Jones, the popularizer of Mouse Davis’s Run-and-Shoot, and Mumme, the founder of the increasingly ubiquitous Air Raid. Between them, they’d overseen some of the most prolific college quarterback careers of all time. Because the hire came just before spring practices, this opening summer session was, in many respects, the staff’s first chance to enact this alliance, to guide the offense through an updated playbook.

SMU will open its season tonight against Texas Tech as an underdog, as it’ll be on most weekends this fall. But sharing the sideline will be a pair of coaches who’ve come to relish the role as football outsiders, and just as the rest of college football has started to adopt the standard-smashing methods, they’ll be trying to invent something new all over again.

Some people become innovators because they are, at their core, iconoclasts, ever ready to defy convention. Others, though, do it because they believe in an idea. Jones and Mummes are not eccentrics. They were only mavericks to the drudging coaches bent on calling for isos and counters on third-and-4.

Mumme gained an affinity for pass-heavy schemes as a receiver at Thomas Jefferson High School in Dallas, but it was an incident away from the field that solidified his view of the game. He was a young offensive coordinator at UTEP when his 6-month-old daughter was hospitalized for spinal meningitis. She survived the episode, but not without a scare. “Pressure is when you’re watching your daughter for 10 days in the hospital, watching to see if she’s going to be able to make it,” Mumme said. The gravity of that crisis put football’s tense moments in perspective. Mumme wanted to play football like a game.

After leaving UTEP, Mumme coached Copperas Cove High School in central Texas, where he assembled the earliest iteration of the Air Raid, pulling from LaVell Edwards’s BYU system and the option routes employed by Davis and Jones. The Air Raid didn’t try to match bigger athletes at their game. It used a variance of route depths spread across the field to challenge defenses horizontally as much as vertically. Against more talented teams, space was the equalizer, and down-and-out programs gravitated toward Mumme’s brand of offense.

He brought the Air Raid to Iowa Wesleyan, where he picked up a fervid assistant named Mike Leach, whom he later took to Valdosta State. In 1996, Mumme was finally given his chance to bring the Air Raid to a major college program, when he was hired as the head coach at Kentucky. In Lexington, he and his system turned quarterback Tim Couch into the first pick of the 1999 NFL draft. In 2002, Mumme left Kentucky amid a series of allegations that several Wildcats players had received illegal benefits, and although Mumme was never sanctioned individually, Kentucky was banned from postseason play that year and lost 19 recruits. Mumme landed at Southeastern Louisiana, a school that had last played football in 1985 and lacked basic equipment, let alone recruits. By Mumme’s second year, the Lions led Division I-AA in total offense. After the season, Mumme was hired as the head coach at New Mexico State.

Jones’s background is not so different. He played college football at Portland State for Davis, who rolled out an offense with four-receiver sets and downfield option routes that gave receivers flexibility to redirect their paths based on the coverage they faced. Jones followed Davis to the USFL, became his quarterbacks coach when Davis coordinated the offense for the Lions, and would eventually rise all the way to the top of the NFL coaching ladder, as head coach for Atlanta Falcons. When things failed to work out in the NFL, Jones eventually made his way back to the college game, taking the head coaching job at Hawaii in 1999. Like Mumme, his offense developed a reputation as a resurrection tool appealing to teams desperate enough for an edge.

When Jones hired Mumme in March (a year after Mumme finished his most recent head coaching stint at McMurry), it was his third attempt to do so over the course of their long friendship. In the early 1980s, Jones and Mumme gravitated toward each other at coaches meetings. As Jones tells it, they were the only coaches in the room who wanted to talk about passing offenses or the four-receiver formations. As the coaches moved from job to job, they were rarely far apart. When Jones coached for the USFL’s Houston Gamblers, Mumme sent his staff from Copperas Cove to learn the virtues of the Run-and-Shoot. More than a decade later, when Jones coached the Falcons and Mumme led nearby Valdosta State, Jones welcomed Mumme’s coaches again. “You could look down in that whole state of Georgia and say, ‘All right, let’s pick out the teams throwing the ball,’” Mumme said. “There’d only be two. It was the Atlanta Falcons and Valdosta State. You couldn’t find anybody else. I mean, at any level. You could go anywhere — high schools, junior colleges. It didn’t make a difference.”

Whenever Jones’s Hawaii team faced Mumme and New Mexico State, the coaches wagered bragging rights on who would go the longest without running the ball. Mumme admitted that he lost every year. “The first couple of years, I really didn’t have many players at New Mexico State and they were pretty good,” he said. “Our best player was a running back, so I flinched first.” The wager was a reflection of their shared utopian vision. “I’ve said, ‘Before I’m done coaching, I’m going to throw it on every play,’” Jones divulged. “And Hal’s said that same thing. So we were going to do it against each other, but then of course we didn’t stick to it.”

Midway through SMU’s opening practice, as big-ass dragonflies swarmed low and the smoldering sun beat down, Mumme stood in the back corner of the end zone and made a circle with his arms. This spot, he explained to quarterbacks and receivers, was where he wanted them to complete a pass that, in Air Raid terms, could be called Y-Corner. He then led receivers through mesh routes, the longtime Air Raid concept that requires two players to run toward each other, as if destined to collide, only to cross so closely that they could slap hands and create a “rub,” football’s legal equivalent to a basketball pick. Eventually, Jones took the role of lead instructor and coached the offense through plays that relied on his prized option routes.

When it came to the offense’s terminology, the decision was made to stick with the terms of the incumbent Run-and-Shoot. “In June’s offense, historically, and in the Air Raid, historically, the two things are the same — the numerals gave you the line protection and then the nomenclature gave you the routes,” Mumme says. “So in that respect, it’s just a matter of changing the numbers to fit the protection here.” Jones explained the translation process in terms of Mumme’s famed “Mesh” play. “What he called ‘Mesh’ now is called ‘590 Mesh,’” Jones says.

The offense did adopt some of Mumme’s terms, but how they come up shows a difference in technique rather than objective. The staff shifted the offense’s short crossing routes from the “under” of the Run-and-Shoot to the “shallow” of the Air Raid. An “under” requires the receiver to get a few steps upfield before crossing, to “set the DB outside and break across his face,” explained Garrett Gilbert, the Mustangs’ starting quarterback. A “shallow” allows the receiver to get inside leverage and immediately cross while building depth on the route. It may seem inconsequential, but the shift showcases the exchange of ideas encouraged among SMU’s coaches and players.

The company line at SMU since Mumme joined the staff has been that the offense would change by 15 or 20 percent, a typical offseason revamp of Jones’s playbook. And maybe it would have been that much, if Jones and Mumme weren’t having so much damn fun. Even familiar plays feel new now that the Mustangs have abandoned huddling in favor of the Air Raid’s faster pace. During an end-of-practice scrimmage, quarterbacks rushed to the line as Mumme sent in play calls through a series of shoulder pats, key turns, and finger wiggles. If Jones wanted to merely “tweak” his offense, he could have hired any of the capable, subservient assistants in college football. He didn’t.

With three minutes left in the third quarter of a game between Texas A&M and Louisiana Tech last October — a game that featured two Air Raid coaches, Kevin Sumlin and Sonny Dykes — the game’s television broadcast displayed a graphic that outlined the Air Raid coaching tree. “Hal Mumme is kind of the founding father,” said Kelly Stouffer, the game’s color analyst. “What these guys do permeates what you see in college football on a Saturday anywhere in the country.” Those lines set off a flurry of phone messages among Mumme’s progeny, the feedback a mix of genuine praise and goading quips about him being the godfather of college football’s new normal. The following Monday, Mumme asked his offensive coordinator, Mason Miller, if he was already old enough to deserve the “founding father” tag. He was, Miller said, and this led Mumme, as Miller remembered it, to give his situation a reflective pause: “I guess that’s cool.”

It is fitting that at the zenith of the Air Raid’s popularity, when at least 10 FBS teams and countless small colleges and high schools will employ the scheme this fall, Mumme decided to join forces with Jones in an effort to concoct an offense never before seen. Mumme and Jones may say they never set to make football history, but these days, the founder of the Air Raid is no longer on the fringe. He is the convention. Aligning with Jones represented a chance to be what’s next, again. Who knows, maybe they will pass the ball on every down.

Twenty minutes after the Mustangs’ first summer practice, Mumme could be found across the road from the practice field, jogging under the refuge of tree-lined Mockingbird Lane. “It’s a young man’s game,” he said. “You’ve gotta stay up with it.”

Paul Glavic (@PaulGlavic) is a freelance writer based in Cleveland.

Why Does Arsenal Need New Players When Emmanuel Frimpong Is Sitting Right There?