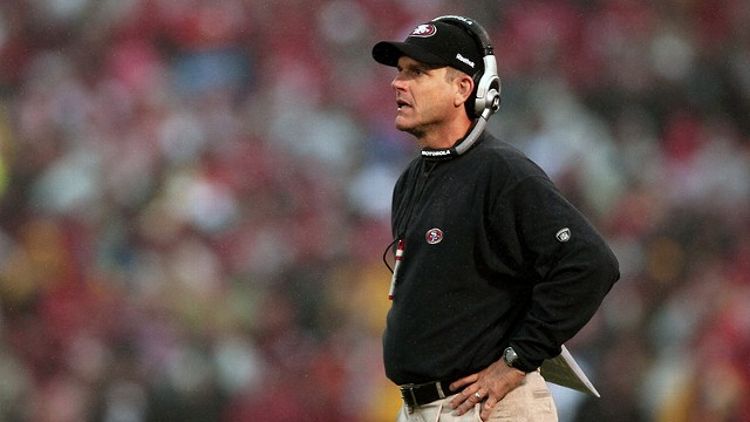 There is the victory you enjoy in private, at the end of a hard-fought day, with the family or close friends, feelings of ambient, total satisfaction in the chest and a cold beer in hand. And then there is the victory experienced in public: the gratuitous bat-flip and slow trot, the penalty for excessive celebration you’ll gladly take, kissing your badge to taunt the opposing fans. Generally, this second type of celebration is not permitted to NFL coaches; a fist-pump and a smile are about as swaggy as it gets. Which is why a good press conference can make for such great theater, the delicate and unlikely battlefield where these hypercompetitive leaders of hypercompetitive men might begin to work through some those accruing aggressions.

Of the various potential storylines that came to an end Sunday, the off-the-field one I feel most deprived of is hearing Jim Harbaugh and Bill Belichick talk about each other to the media. To watch these two deal with journalists is to watch men who seem to have no respect whatsoever for the profession, yet have no desire to grant them the satisfaction of being direct about it. They are masters of the subliminal diss, gently condescending and straight-faced in giving yes-or-no answers to yes-or-no questions or reporting that Tom Brady is probable. A clip of a coach melting down or awkwardly stymieing his rage makes for entertaining viewing. But watching a nasty, cerebral coach bully a questioner, dissect the breakdowns in logic, or patiently stonewall questions with a name-rank-serial number flatness — these are different feats of rhetoric.

On Monday, Harbaugh stepped to the podium for his last mandatory press conference until next season. He looked like the game had just ended minutes before, rather than the previous night. His tone was weary, grave. When asked early on what his “message” to the team had been in their final meeting: “Several. Basically, as Sir Andrew Barton said, ‘Fight on, my men.’ Sir Andrew said, ‘Hurt but not slain, lay down and bleed awhile, then we’ll rise and fight again.’” Asked when they would, per Harbaugh’s go-to 16th-century Scottish privateer, “rise and fight again,” he affected a wistful, middle-distance tone: “Soon, soon.”

Shout out to the dog-eared copy of Bartlett’s, perhaps, but Harbaugh has rarely shied from random allusions all year, weaving Ernest Hemingway into his postgame interview Sunday (“This team is not defeated by any stretch of the imagination. Man can be destroyed but not defeated as long as there’s hope”) and demonstrating an impressive grasp of the various stages of Jedi career advancement earlier this season: “[Long snapper Brian Jennings]’s not a Padawan learner. He’s not an apprentice. He’s a full-fledged Jedi Knight.”

Like Belichick, Harbaugh is someone who seems to appreciate the possibility of irony. It’s a useful trait for keeping oneself entertained, and it can call attention to the utter absurdity of the moment. Harbaugh grew stronger as the session dragged on, taking to questions like a brutally petty grammar-school teacher parsing the difference between “can” and “may.” “How serious was wide receiver Ted Ginn’s injury that kept him out?” someone asked. “Enough to keep him out,” Harbaugh replied. When presented with the question whether the Niners overachieved, underachieved, or got “exactly what it deserved,” he ignored the prompt completely. “Like I said, I think it was an incredible season.” The diligently rephrased follow-up fared no better. “It was an amazing season. I think the team did a tremendous job. Incredible.”

The best moment came at the very end, when he momentarily vacated his strategy of being as withholding as possible. The final question from the press pool was about a nonfootball matter: “How did you spend your time after the game? What did you do last night?”

“Is it just California that everybody just wants to know how you feel? Care about what you thought, what you did, how you felt, how your pinky feels? Is that just a California thing? Back where I come from, nobody really cares.” You could almost hear the italics and air quotes.

The follow-up was tentative and wobbly. Harbaugh was reminded that he had gone to high school in California, making him at least part touchy-feely, right? “You demand an answer to this question?” Harbaugh mocked. “I’m requesting it,” the reporter replied. “I would never demand from you. Share with us what you did last night if you feel comfortable doing it.”

“A Midwestern thing,” he joked.

Behind a podium, fulfilling an obligation that someone else mandated, you have a few options. You can play dumb (often unconvincingly). You can boast and preen, all in the name of deflecting attention away from your players. You might hate this part of the job and stand there with your arms folded, sulking and surly. You can look like you’ve stepped out of a daguerreotype and be the strict, humorless, old-school disciplinarian, answering questions with an earnest, professional formality. Or — you can treat it as a different kind of game. After all, you can’t slap a fellow coach on the back too hard or “forget” to shake his hand; you can’t trip a player sprinting down the sidelines, run up the score, or boo your fans back. The press pool: These are the only combatants you can beat up on without impunity.

The last question about Harbaugh’s home life unanswered, someone heaved up one last duck: “Where will you watch the Super Bowl?”