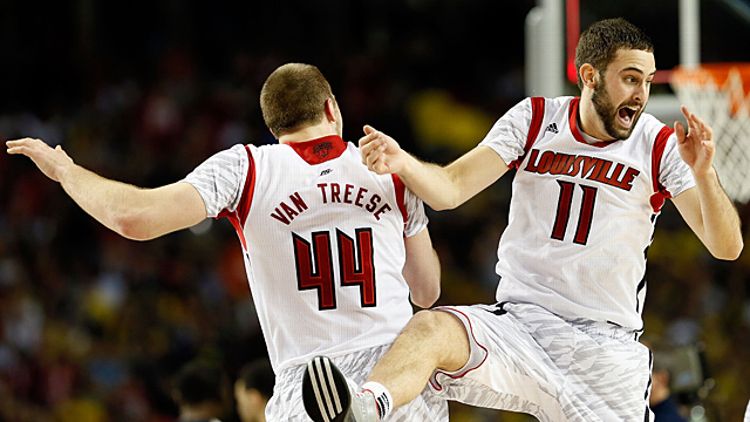 When Kevin Ware went down with a broken leg in Louisville’s Elite Eight win over Duke, most of his teammates reacted with varying degrees of shock. There was, of course, the immediate cringing; it was a gruesome injury, and the grimaces and recoils only made sense. Soon, others were crying. But after turning his head with everyone else at the sight of the snapped bone, Luke Hancock was the one who came to Ware’s side and gripped his hand. He said a prayer, guided him through the initial trauma, and stayed with him on the floor while the medical staff worked. It was because of Hancock, at least in part, that Ware overcame his initial horror and encouraged his teammates to keep playing, to win the game.

In the days leading up to Louisville’s Final Four game against Wichita State, the question Hancock faced over and over was why he’d done it. Why did he have the presence of mind to react the way he did?

When he answered the question Friday in the Georgia Dome’s media center, he probably could have recited a response from memory. He’d been the centerpiece of hundreds of stories for that one act, and was destined to be featured in a hundred more. Which is why it surprised me that his answer, simple as it was, still moved me.

If I had read the words rather than heard them, I would’ve skipped right past. But there’s something about Hancock’s delivery — I keep groping for words like serene, gracious, candid — that give an impression of sincerity. With his beard and his speech pattern, he’s a dead ringer for Richie Tenenbaum, Luke Wilson’s troubled character in The Royal Tenenbaums. And somehow, the very basic idea that he didn’t want to see another person alone in a time of need still felt powerful to me a week later. Maybe I’m just a sucker for human empathy, but a sneaky tear or two pooled in my eyes. Actually witnessing the injury didn’t reach me on anything more than a gut level, but Hancock’s words did.

Is it too much to compare what Hancock did in that moment to the way he played against Wichita State in the second half when he rescued his team’s season? One was pure sports, and one was a drama that transcended the game, but the narrative was the same: The team was in turmoil, and Hancock was the one who emerged to make things a little better. And although the stakes were very different, the result was the same: Hancock saved Louisville.

I came into Atlanta thinking that no team had a chance to beat the Cardinals, but especially not Wichita State. Watching the Shockers struggle to maintain their composure against the Ohio State press in the waning moments of the Elite Eight win told me everything I thought I needed to know. If they couldn’t withstand the Buckeye desperation, how could they possibly survive against Louisville (who had the best pressure defense in the country) on an even bigger stage?

But then some strange things happened. The referees took it upon themselves to call an extremely tight game, which made Gorgui Dieng, Russ Smith, and Peyton Siva tentative on defense. (Pitino: “Well, I’ll tell you, it affected us not in terms of foul trouble. It affected us in the fact that guys were afraid to foul, and their pressure relented until we obviously had to try to win the game. So they were all trying to play very cautious, didn’t get after people.”) The Georgia Dome also happened; Louisville isn’t a great shooting team anyway, and the Dome arrangement exacerbated the problem. Most importantly, Wichita State’s defense happened. By using his big, athletic defenders to stop penetration, and double the ball handler inside, Shockers coach Gregg Marshall accomplished what nobody else has been able to do since at least mid-January: He kept Russ Smith and Peyton Siva out of the lane, and he turned Louisville into a jump-shooting team.

At halftime, 13 of Louisville’s 20 field goal attempts were 3s. That’s 65 percent for a team that normally shoots 30.1 percent of its shots from beyond the arc. Watching Louisville’s strange passivity reminded me of a quote from Russ Smith’s Friday interview that struck me, at the time, as odd. Someone had asked him the predictable question about how disappointing it would be if Louisville didn’t win the title, and I expected Smith to respond with the predictable answer (“very disappointing, we came here with one goal in mind, etc.”). But Smith, who’s soft-spoken just like Hancock, threw me for a loop:

“No, not really,” he said. “It’s an honor to get here to the Final Four, the last four teams remaining. To come up short would be frustrating … I wouldn’t call [the season] a disappointment, I would just say the better team won.”

At the time, I thought his honesty was great. I didn’t think for a second that it would make him play with any less intensity, so why not admit that it’s a huge accomplishment just to be in Atlanta? But watching him and Siva settle for jumpers, I started to wonder if they were being too passive. Another Smith quote, this one from after the game, shed even more light on his mind-set at the time:

“I feel like when [the lead] went to 12, I looked at it, and the time kept going down, people kept getting fouled,” he said. “It was like, man. I was actually waiting for our run.”

The key word: Waiting. Smith wasn’t even having a terrible game the way Siva was (0-5 in the first half, 1-9 in the game), but he wasn’t exactly ready to turn the tide when Louisville’s deficit grew to 12 with 13:36 remaining. At that point, the cause seemed pretty hopeless, and there was a definite leadership vacuum waiting to be filled for the title favorites. As Pitino said afterward, four of his starters had the worst nights of their season. His best players were slipping at the biggest moment.

With Wichita State’s lead at 12, Luke Hancock drove into the lane, kicked it out to a walk-on junior named Tim Henderson, and watched as Henderson’s 3 went down. (The Henderson story is a gem all by itself. As Pat Forde noted, he went through the month of February and most of March without a basket, and many Louisville detractors thought Pitino kept him on the team because his uncle is the CEO of Yum Brands, the company that sponsors Louisville’s arena.) Henderson hit another 3 on the next possession on a feed from Russ Smith. Then Hancock drove again, converting a layup, and repeated the act a minute later. Suddenly, with 10 minutes left, the Wichita lead was down to 50-45. And it had come in the strangest way possible. Sports Illustrated’s Luke Winn put everyone’s collective cluelessness best:

But Hancock wasn’t done. With 6:30 left, he gave Louisville its first lead of the second half with another 3. And another, with 2:06 left, to push the lead to five. And a layup on the next possession to keep the lead at five. And a free throw with nine seconds left to push it to three, and then, after missing his next foul shot, the crucial (and controversial) tie-up with Ron Baker that sealed the game for good. Whatever you thought of that call — the consensus is “not much” — it was Hancock being in the right place yet again. He finished with 20 points, a season high in games that didn’t go to five overtimes, with four boards, two assists, and two steals.

“If you watch Luke in practice, you wouldn’t be surprised,” Smith added. “I’m so happy for him, man. I’m thankful that I have a guy like that on our team, you know, a leader, a guy who can step up in the big situations, a guy who can keep the team together.”

Even bigger than the points was that he inspired his teammates. Suddenly, Siva and Smith turned up the aggression, forcing six turnovers in the last seven minutes when they had managed just four in the 33 minutes before. The famous Louisville stress came down hard on Wichita, and the Shockers, at last, broke beneath it.

For his part, Hancock downplayed the similarities between his reaction when Ware went down and his play in the second half against Wichita. (“Poise in Kevin’s situation is totally different than poise in a game.”) But Pitino wouldn’t shy away. To him, the Ware reaction was just another sign of the leader Hancock has become. And he’s no stranger to injury himself. Hancock separated his shoulder last May, and Pitino recalled how trainer Fred Hina said he’d never seen so much shoulder damage in his life. There were doubts that Hancock could play at the start of this season, and even if he did, nobody knew what kind of impact he’d have.

“That man, in the beginning of the year,” Pitino said, “it took him a half hour of warm-ups just to lift his arm above his shoulder. I said, ‘Is he going to play this year?’ [Hina] said, ‘No one but Luke will play. Toughest kid I’ve ever seen since I’ve been a trainer.'”

And that’s why Hancock, the George Mason transfer, became a captain before ever playing a game for Louisville. That’s why he was at Ware’s side after the horrific fall. And that’s why he came off the bench in the second half of the Final Four, with his teammates drowning, and saved them once again.