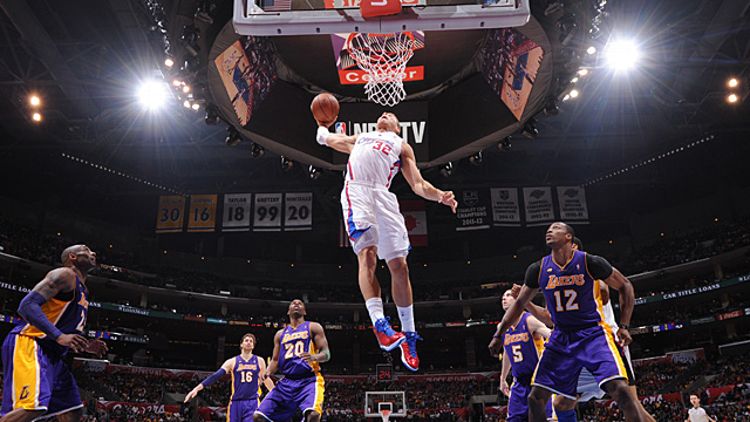 There are nights when he sulks, glares at the officials after every whistle, mopes past his coach (you’ll see why in a second), and throws his hands in the air when he doesn’t get the ball on an offensive possession. There are nights when you watch him and think, what are you? Are you a human highlight reel wrapped around an otherwise average power forward who is a below-average defender with limited shooting range? There are nights when you ask, why, in the name of all that is holy, if you can do what you can do in that video above, would you ever burn six seconds on the shot clock so that you can crossover dribble a couple of times and launch a midrange jumper? And then there are nights (days, in this case) when Blake Griffin is basically unguardable.

Dwight Howard is about as interested in getting involved with that dunk as he is in listening to yet another Kobe soliloquy about the benefits of ice baths and oxygen tanks. 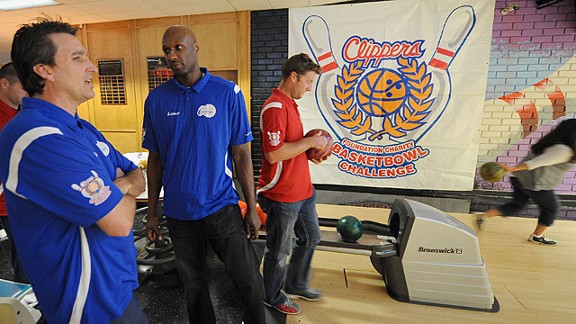 Last week, the Los Angeles Times ran a story about friction in the Clippers locker room, specifically between Griffin, DeAndre Jordan, Chris Paul, and tangentially, head coach Vinny Del Negro. The short version is this: Blake is a big baby, DeAndre wants more crunch-time minutes, Chris rides everyone too hard, and Vinny is doing the best job anyone could be expected to do in this situation. Which of those last four statements reads a little funny to you? If you said the Vinny one, you win a set of steak knives. I take no issue with T.J. Simers’s reporting, but when I read the piece, this passage jumped out at me:

Del Negro has done a masterful job for the most part in dealing with a deep team; everyone wants more playing time. But he’s not a hand-holder. He’s not big on sitting beside a player, throwing an arm around his shoulder and nursing hurt feelings.

Hmmm. When you look at that statement in the context of this specific article, it makes you wonder, who exactly is passing all this Downton Staples Center gossip? Could it possibly be the much maligned Del Negro? The out-of-contract Del Negro? The same Del Negro who was rumored to have been advocating for a deadline deal that would have sent Jordan (and Eric Bledsoe) east to Boston in exchange for Kevin Garnett? The same Del Negro who just had a public disagreement with Griffin over the reason behind the Clippers’ poor defense (Del Negro said the team’s big men needed a sense of urgency, Griffin said it came down to strategy, a.k.a. coaching). The same Del Negro who must (he must!) hear all the talk that the Clippers are more or less coached by Paul, while Vinny draws up landscapes on his whiteboard? You know, Paul, the guy who is portrayed in this same piece as “relentless,” someone who “never shuts up,” and is turning off his teammates.

Yesterday, after the Clippers impressively beat their cross-hallway rival Lakers, Del Negro was asked about the chemistry issues in his locker room “There’s always things that — the frustration builds. There’s no question. And Blake (Griffin) and Chris (Paul) especially are two of our All-Stars and our biggest pieces. I think it’s also a good thing because there’s some frustration there because we need to play better. If the frustration is everyone pulling in the same direction, it’s a positive thing.” That’s certainly not a denial that there are chemistry issues. I have the weirdest feeling: If Del Negro goes down, he’s taking everybody with him. The guys? They seem to be getting along totally fine.

Stephen Jackson and Matt Bonner had a joint Anchorman-themed birthday party. Captain Jack dressed like “Ron Burgundy,” brought his flute, and sang along with “Afternoon Delight.” Bonner dressed like “Brian Fantana” (Matt Fantana, according to Jackson). This is the most important video you will watch all day.