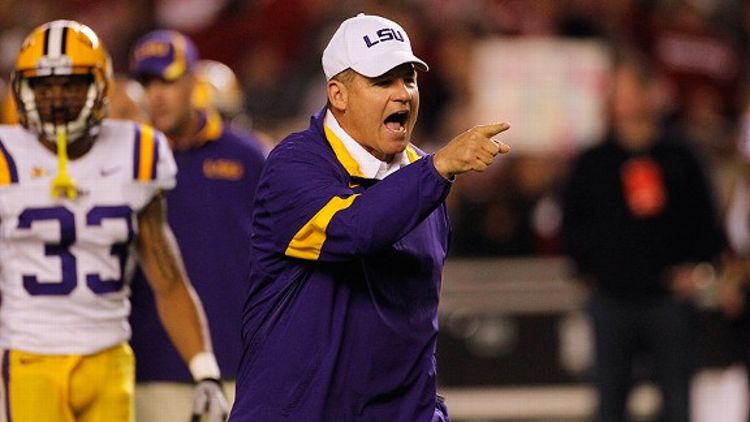 Maybe it’s just the reporter in me, but as soon as Marquis Maze heaved that football toward the goal line, I started thinking of headlines. I could see them on newspapers large and small, a thousand variations on the same facile irony: SABAN TURNS TIDE. Boring ole uncle Bama was going to win this game on a trick play, and wacked-out cousin LSU was going to lose this game on a trick play, but then that toss out of the backfield from Alabama’s star wideout hung up in the air just long enough to land in two pairs of hands at the same time. One belonged to Alabama tight end Michael Williams, and the other to LSU safety Eric Reid, who tore the ball away before the bodies reached the grass. LSU regained possession at its own 1-yard line, thereby setting up the game-winning punt.

I realize how absurd that phrase sounds: “Game-winning punt.” It feels like something I cribbed from a 1938 New York Herald Tribune column. (If you Google it in our modern age, you get about 20 pages of DeSean Jackson and no detectable videos of punts that aren’t returned for six points.) And I know that technically, the punt wasn’t the game-winner at all, since LSU won in overtime, but these two plays were clearly the sequence that facilitated LSU’s 9-6 victory over Alabama on Saturday night. After a three-and-out, on came Tigers punter Brad Wing, the most bumptious object to be associated with Australia since the Bloomin’ Onion, and that cocky little wallaby blasted the ball over Maze’s head and 73 yards downfield, buying the Tigers enough field position to work its way into overtime. They got a stop, advanced the ball in unsexy increments, then kicked a game-winning field goal.

That’s what was so revealing about this night: Nothing counterintuitive was permitted to occur, and LSU coach Les Miles won anyway. We kept waiting for the real Les to show up. On every first down in the fourth quarter, I anticipated a triple reverse or a flea flicker, and on every second-and-long, I envisioned LSU’s Jordan Jefferson would take a shot downfield or throw a hook-and-lateral or pitch the ball and sprint out on a post pattern, and not a single LSU punt or field goal all night passed where a fake did not cross my mind (and Alabama coach Nick Saban’s too, I’m sure). A couple of weekends ago, my friend and colleague Wright Thompson watched college football at Miles’ house, and saw him exhort opposing coaches, again and again, to go for it on fourth down. But the Les of 2011 has matured to the point that he is able to restrain his inner self in a game like this one; the Les of 2011 has come to realize that sometimes the best way to get lucky with a team as talented as this is not to take any chances at all. He laid low. He trafficked on his reputation, and he made Saban gamble (and fail) instead. “There was never a chance that we were going to fake a thing tonight,” Miles said after the game, which might be the most shocking statement in a career based on jolting the system.

Truthfully, I have no idea whether this game lived up to its hype. The very notion is one of those flaccid fan-poll questions amplified by the open mic of social media, because whether a game lives up to its billing always depends on your personal affinity for the sport in question. I am not objective when it comes to college football, and so I did not find this game boring, because even when it was boring, it felt surprising. Which is further proof that Les Miles is the most interesting coach in America, even when he spends the whole night bluffing.

Previously from Michael Weinreb:
Kissing Your Sister: Why ‘Bama/LSU Should End in a Tie
The Real Rocky
Who Invented the Seven-Game Series?
The Best Passing Quarterback Ever