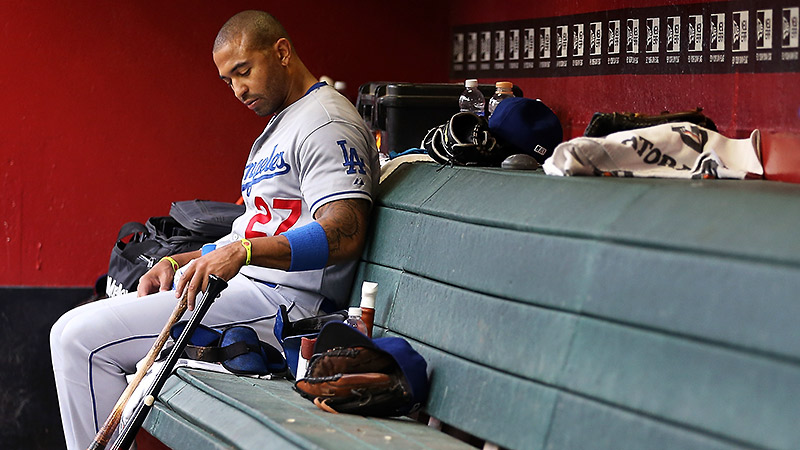 On May 27, the Dodgers hosted the Reds for the second game of a three-game series. And for the fifth consecutive game, Matt Kemp wasn’t in the lineup.

Kemp finished second in National League MVP voting just three years ago, losing to Ryan Braun because Kemp happened to have lousier teammates than Braun did that season. Kemp struggled during the ensuing two seasons, as injuries ate into both his performance and his ability to stay on the field. But following a slightly delayed 2014 debut after offseason ankle surgery, Kemp looked healthy enough to play nearly every day. Instead, Kemp found himself gathering splinters in the third year of an eight-year, $160 million megadeal. Unsurprisingly, he wasn’t happy.

On May 28, Carl Crawford hit the disabled list with an ankle injury of his own, opening up a spot for Kemp in the everyday lineup. But it was merely a temporary solution to a seemingly permanent problem. Crawford is expected back next week, and when that happens, the Dodgers will face the same dilemma that has plagued them all season: They have four outfielders making too much to sit on the bench, and, despite the seemingly impossible math, Kemp is the fifth-best option.

Since returning to the starting lineup on May 28, Kemp has gone 4-for-32 with 11 strikeouts, no walks, and just one extra-base hit. That stretch dropped his season line to .238/.291/.398. He’s been playing left field, because Don Mattingly and other Dodgers decision makers grew sick of watching him struggle at his usual position in center. Though advanced metrics suggested that Kemp was overrated defensively and probably didn’t deserve the two Gold Gloves he won earlier in his career, Kemp in his prime was at least a capable center fielder whose booming bat at a relatively offense-challenged position more than justified playing him there. Now he’s a clear defensive liability, worn down by injuries and without the big offensive numbers to back him up. As Mark Saxon reported in the ESPN LA story linked above, Kemp had four balls go over his head for extra-base hits on May 22, with each hit contributing to one of the four runs the Mets scored in that game; Kemp also dropped a ball he’d picked up on the warning track, which allowed a run to score. Couple that awful defense with Kemp’s subpar offense, and you have a player who, by FanGraphs’ Wins Above Replacement, has been the fourth-worst everyday player in the majors.

If Kemp continues to perform at a sub-replacement level, he should expect to see a lot of the bench when Crawford returns.

Kemp certainly won’t supplant Yasiel Puig, who, after taking the league by storm in 2013, has been even better this year, ranking second in the National League in batting average and on-base percentage and third in slugging average. He’s walking far more and striking out far less than he did in his rookie season, swinging at far fewer pitches out of the zone, and thus swinging and missing a lot less, correcting the biggest flaw in his game. We’re just over one calendar year into Puig’s young career, but it’s easy to argue that he’s already one of the five best players in the National League.

The most logical role for Kemp would be a straight platoon with Crawford. Though Crawford’s splits aren’t as dramatic as Ethier’s, we’re still talking about a hitter who has batted .240/.296/.320 against lefties this year (in a very small sample of 25 at-bats) and just .210/.261/.335 against them over the previous three seasons, but has posted much better results against right-handers.

There are two major problems with that platoon scenario, however. The first is something we covered back in 2012, when the Dodgers signed Ethier to a five-year, $85 million contract that looked like a disaster the second pen touched paper. When a team has as much money as the Dodgers do, there’s always a strong temptation to spend it. But when a team doesn’t have someone on whom it’s really worth lavishing those riches, deals like the Ethier signing ensue. By locking up Ethier, L.A. risked falling victim to what we called “The Curse of Plenty.” With all three outfield spots locked down at the time, the Dodgers aced themselves out of pursuing any outfielders who could be better than what the team already had. Moreover, by committing to Kemp, Ethier, and Crawford for so many years and so much money, the Dodgers risked blocking any premium outfield prospects who might come up through the system. 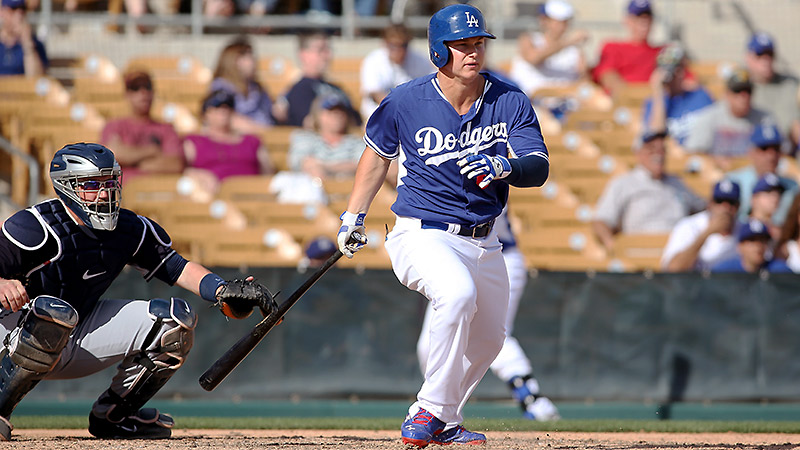 Which brings us to the second leg of the Kemp Quandary. With Kemp and Crawford both missing huge chunks of last season, Puig was able to crack the starting lineup, earn his keep, and then some. But because of how crowded the Dodgers’ outfield is at the moment, the organization’s next-best outfield prospect isn’t going to get the same chance Puig got. Center fielder Joc Pederson is a 22-year-old dynamo, an ultra-toolsy player batting an out-of-sight .337/.446/.625 this year at Triple-A, with 15 homers and 13 steals in 55 games. The Dodgers play their Triple-A games at hitter-friendly Albuquerque, and hitters do often have trouble parlaying huge numbers in the high minors into great major league success, especially when they first make it to the Show. Still, it’s pretty safe to say that as soon as Pederson gets the call, the Dodgers will become a better team. Given the monster start the NL West rival Giants have turned in, the sooner that happens for the Dodgers, the better. And yet Pederson is toiling away in the minors.

Whether Pederson gets promoted, and how quickly it might happen, remain open questions. Pederson is another left-handed hitter, so he wouldn’t quite make Kemp as obsolete as would a righty swinger with the same profile. But if Pederson were to join the Dodgers’ crowded outfield picture, there’d simply be no way to hang on to everyone else. The easiest solution to the problem, then, would be to trade at least one of the three high-priced outfield veterans. But here’s the rub: No one’s going to want any of them, at least not unless the Dodgers throw in a ton of cash to cover a big chunk of that player’s contract.

This is where having more money than many small countries could come in handy. If the Dodgers become convinced that Kemp’s performance losses are irreversible — that his bat will never be the same after a major shoulder injury and that he’ll never have the speed and range to play center again, much less rediscover his former 40–stolen base form — then he really should become a platoon player, especially with Puig being the only other outfielder out of the five to bat right-handed. Ethier, the most durable player of the three veterans, who’s also a few months younger than Crawford, could be the most logical trade bait, since he’d be a useful commodity for a team looking for a righty-mashing outfielder, assuming the cost would only be about $10 million a year, with the Dodgers kicking in $25 million or so.

For now, these are all hypotheticals. The Dodgers have already dug themselves an 8.5-game hole in the NL West, sitting closer to last place than to first. That should heighten the impetus to call up Pederson and improve the roster. But while on paper trading Ethier and platooning Kemp, or simply trading Kemp, would seem to make sense, in real life it’s not that easy to demote or dump someone who just a couple of years ago was the team’s franchise hitter. Team sentimentality, Kemp’s ego, or simply a lack of interested suitors could make the whole situation a bigger mess than it already is.

The Astros solved their own prospect dilemma by signing Jon Singleton to a multi-year deal, negating any concern about his potential Super 2 status and enabling Houston to call him up. Oscar Taveras is now a Cardinal, and the rumor mill has Gregory Polanco headed to Pittsburgh in the very near future. But for now, Pederson has to wait. And barring another significant injury, something far more dramatic might have to happen to get him to Dodger Stadium.

NBA Finals, Game 1: The Beauty of the Matchup