Liverpool Gets Under Man City’s Skin 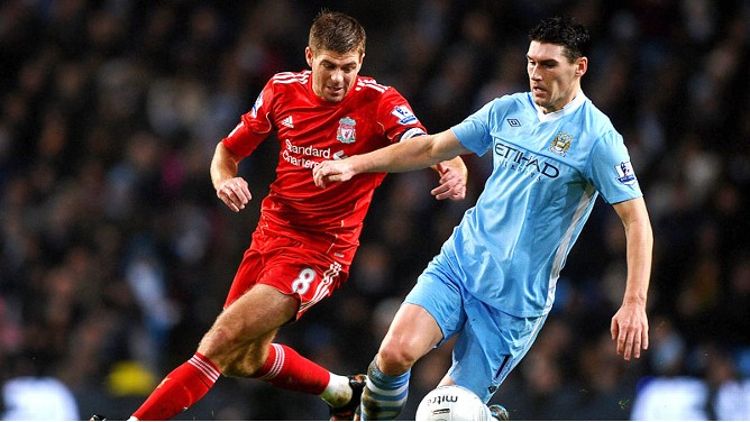 It was the first leg of the Carling Cup semifinal between Liverpool and Manchester City, held at Etihad Stadium. It was a game of two halves. And frankly, both of them were a bit dull. So why am I breathing into a brown paper bag in anticipation of the return leg at Anfield?

Handbags! Let me explain: The Carling Cup, or League Cup, is sort of looked down upon, occasionally referred to as the Kids Cup, owing to top-flight managers using it as an excuse to play their younger prospects and fossilized reserves. Nobody takes it all that seriously until it’s time to take it seriously (usually in the quarterfinals).

This isn’t altogether a bad thing. The Carling Cup can often be a sort of stars-of-tomorrow showcase for football managers and players of Football Manager alike. But, in the end, the competition is often neglected; it doesn’t have the fiscal rewards of winning or placing high in the League, nor does it have the historical significance or playing-a-bunch-of-chimney-sweeps romance of the FA Cup.

So it’s partly sheer luck that we got such an interesting matchup (if not the most interesting of games) Wednesday in Manchester. Going into the match, the impetus was there for both Liverpool and City to take this clash seriously. City wants to show that, given the bajillion dollars they’ve spent on talent, said talent can compete on multiple fronts. Roberto Mancini’s side already went out of the Champions League and FA Cup, so staying in the Carling Cup has been made all the more important.

For Liverpool, which didn’t qualify for European competition this season, the Carling Cup is a chance for some much-needed silverware. With both clubs aware that a semifinal victory meant a trip to Wembley, where they would be heavy favorites over either Cardiff City or Crystal Palace (both of whom play in a division below City and Pool), last night’s semi was bound to be tense.

Tense it was; it just wasn’t all that fun to watch. It’s hard to call any team that can afford to simply banish players (Carlos Tevez) or pay other clubs to take them on (Emmanuel Adebayor) “depleted,” but that’s kind of what City looked like Wednesday. The Toure brothers were away on international duty, Vincent Kompany was suspended, and David Silva was injured. This was as bare-bones as it gets for Man City, one of the richest clubs in the world.

Liverpool started well and would have gone ahead early if Andy Carroll had shot at the goal instead of at goalkeeper Joe Hart. They got a justified lead from a Steven Gerrard penalty in the 13th minute and seemed to play guard-the-castle-walls defense for the rest of the match.

Things got interesting when Liverpool’s Glen Johnson brought down City’s Joleon Lescott with a two-footed tackle. It was the culmination of some chippy behavior on both sides. (Earlier, Samir Nasri had refused to shake Jamie Carragher’s hand after a Carra challenge.)

“Sometimes you’ve got to do the ugly stuff,” Gerrard said after the game. But it was really after the game that the ugly stuff happened. Gerrard confronted Mancini in the tunnel, pressing the Italian for asking the referees to red card Johnson, and leading to this fun bit of audio.

Later on, somewhere on the road between Liverpool and Manchester, a group of Liverpool fans got into what appeared to be a high-speed argument with Nasri, berating the Frenchman while driving and telling him that he should have stayed at Arsenal. Nasri responds “Top of the league” before speeding away.

With City nursing a goal deficit, with captains and managers exchanging unpleasantries, with Liverpool still smarting from the public ridicule they’ve faced in the wake of the Luis Suarez and Oldham incidents and with City now losers of three of their last four matches, the second leg at Anfield is shaping up to be a sumptuous clash.

It might be a secondary cup, but this could turn out to be a first-class semifinal.

The D'Antoni Defense: How the Knicks Stifled the Sixers