The D’Antoni Defense: How the Knicks Stifled the Sixers 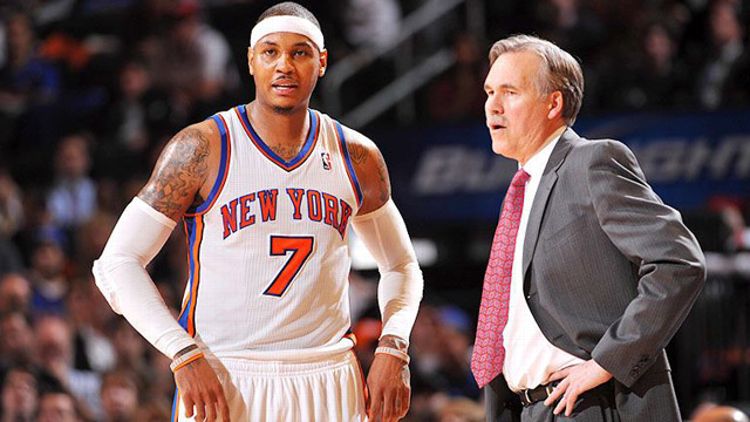 “It’s the best defense I’ve seen them play. It’s not anywhere near what I saw from the three games I watched prior. This was a totally different team tonight that we played against than what I saw on tape.” &#8212 76ers coach Doug Collins, after Philadelphia’s 85-79 loss to the Knicks on Wednesday

The Knicks’ best defensive effort of this truncated season came Wednesday night against the Sixers, a team that was playing its fifth game in six nights and third straight without its starting center. The Knicks stretched their streak of allowing fewer than 90 points to three games, but it has included opponents such as the Pistons and Bobcats — not exactly world beaters. Still, there are some assurances to be taken in the Knicks’ performance against Philadelphia and the temporarily cooling of Mike D’Antoni’s seemingly eternal hot seat.

It was the fourth straight win for the Knicks, who started the season with four losses in six games. The bleak start again prompted calls for D’Antoni’s dismissal. The coach’s commitment to defense has swayed somewhere between passive and nonexistent since he arrived in New York, a reason that he will probably never be fully embraced by this fan base, which is not mistaken in its belief that championship basketball is borne out of stout defense.

The solution was easy when D’Antoni coached in Phoenix. More nights than not, his Suns came with more offensive punch than their opponent. Defense was a moot and mild point.

That philosophy did not transfer during a mostly rough beginning with the Knicks, when D’Antoni had neither the players with the offensive capabilities like he did in Phoenix, nor the mind-set to instill a defensive philosophy and uproot a system he deeply believed in.

Now, the players are here. They are not, for the most part, salary-cap fillers, trade bait, or players to be purged later. The dream for LeBron is distant, Amar’e and Carmelo are here and Chris Paul is not coming. The foundation can start to be laid down and there are no more usable excuses — especially not when assistant coach Mike Woodson is dedicated to stopping offenses.

Wednesday’s matchup against Philadelphia is an example of what the Knicks can be, for better or worse. They started the game with a stingy defense, Stoudemire and Anthony took turns dominating in the middle two quarters and they mostly crossed their fingers in the final 15 minutes, when a 17-point lead evaporated.

This is about the time when a normal season would start, after eight exhibition games spread out across the calendar. There is little coincidence that the Knicks’ best defensive game arrived at this point &#8212 against a sluggish, weary team in this maddeningly paced season.

The defense is fortified in the two areas any team would most desire it be: point guard and center. Iman Shumpert is probably not the short-term answer at point guard — his 10 missed shots and four turnovers on Wednesday can attest to that. But he is long and active, and he disrupts passing lanes and dives on the floor. He caused more swooning among Knicks fans (who call for him when Toney Douglas is on the court) by tweeting after the game about the honor of meeting John Starks that night and how he hopes to play defense like him.

Meanwhile, Tyson Chandler is revving into last season’s form. He gravitated toward loose balls, altered shots, and grabbed 13 rebounds on one shot attempt — the perfect line for a center who is joined on the frontline with trigger-happy players like Anthony and Stoudemire.

“Guys are buying in,” D’Antoni said afterward. “They know that is the key. Everybody knows that. Iman puts a lot of pressure on the ball and he can do a lot of things. Tyson is a super goaltender back there and other guys are buying in. For us to win, they have to keep the intensity where it is and we will be able to get our offense right.”

D’Antoni’s most important decision this season was replacing Douglas with Shumpert in the starting lineup. Douglas is what he is, which is to say that he’s not a starting point guard of a team with aspirations for playoff wins. He is instead a remnant of the past couple of years &#8212 a player who was playing too many minutes too far removed from his role. On this team, you insert Douglas for a couple minutes and see if his shot falls. If it does not, you pull him out and repeat the process the next game. You don’t allow him to sabotage the offense by pulling the ball a couple steps over midcourt to then stop his dribble.

There will be another important decision facing D’Antoni whenever Baron Davis recuperates from his back injury: How much time to dedicate to him if it squeezes Shumpert’s minutes and shortchanges the Knicks defensively? Shumpert is still a rookie trying to acclimate himself to an offensive system. He had a costly turnover with less than a minute to go on Wednesday when D’Antoni simply crossed his arms, inhaled, and looked at the Madison Square Garden ceiling before letting go of the breath. Davis is the Knicks’ best hope at running a fluid offense with a proven ball handler, but that is a choice to debate later. D’Antoni can sit down comfortably, if only for the moment.

Liverpool Gets Under Man City's Skin